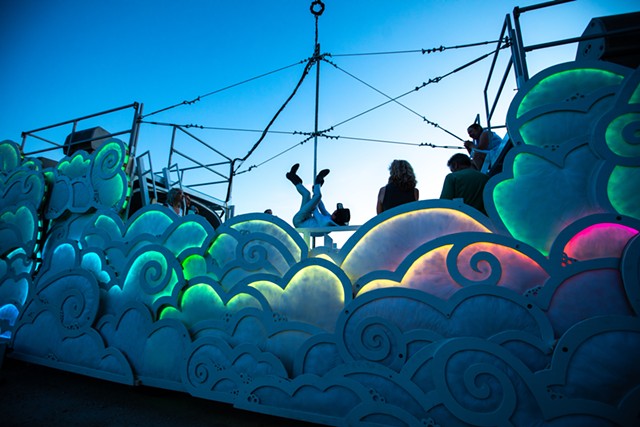 On Saturday, Fluffy the Floating Cloud Bank will leave Charlotte’s Earthkeep Farmcommon, where it was brought to life by more than 100 Vermonters, and make its way to Nevada for this year’s Burning Man.

The 40-foot-long, 8-foot-wide bus is covered in 70 cloud forms that are intricately woven with 14,000 LED colored lights that respond to music and sound. It is equipped with a wheelchair lift and handrails inscribed with braille to inform sight-impaired visitors of what awaits — such as two open-air decks and a dance floor in Fluffy’s center with a dance pole in the middle topped with (what else?) a flamethrower. 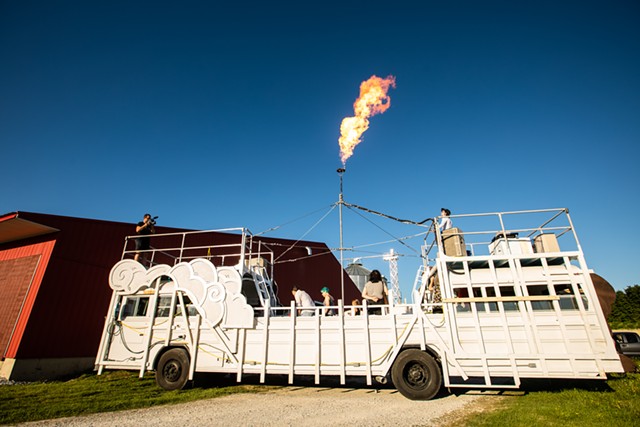 Fluffy will serve as part of the public transport system — a series of 800 “art cars”— at Burning Man, the city of 70,000 people that pops up every year in Nevada’s Black Rock Desert. The weeklong celebration of art, fashion, self-expression and self-reliance begins on Sunday, August 28.

“This is accessible public transit masquerading as a floating cloud bank across the desert” explained Vermont’s Duane Peterson.

He’s a Burning Man vet, cofounder of SunCommon and the founder of Duane’s Whirld, the Burning Man camp that spearheaded Fluffy. Peterson teamed up with more than 100 people to build the art bus, including Burlington artists and Beta Technologies engineers. Among those in the latter group is IBM Fellow John Cohn, who mapped the LED lights to the shapes of the clouds.

“Because we’re working with such a big team, we could reach high. We could dream big,” artist Marie Davis said. She added that Cohn mapped the lights “in such a way that we can make a sunrise happen or a sunset through the clouds or a thunderstorm.” 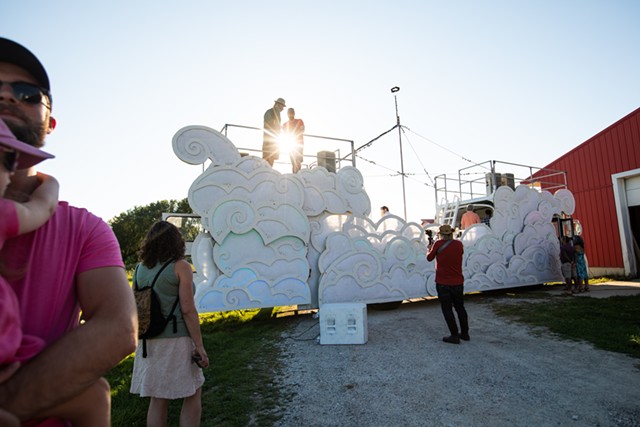 The group started planning Fluffy in January with drawings and a two-foot-long scale model. They found a yellow 2008 Bluebird school bus in Las Vegas and drove it to Vermont in late March. A team of welders and pyrotechnicians worked together to transform it into a rolling art installation.

About 40 people will be part of the Duane’s Whirld camp this year. The group plans to deliver cold beer to Burning Man revelers during the day and s’mores at night. Giving gifts — known as “playa gifts” — is customary at Burning Man.

“Those are part of the gifts from Vermont,” Teresa Davis said of the beer and s’mores. She’s the owner and founding director of Davis Studio in South Burlington and cofounder of Babaroosa, an immersive art destination scheduled to open at the Essex Experience in 2024. Davis is heading to Burning Man for the first time this year. “I think that kind of spirit that we see a lot in Vermont is the piece that I’m looking to see expanded at Burning Man,” she said.

Noting all of the locals who have “put their hearts and heads or hands” into building Fluffy, Peterson said, “I think we’re going to represent Vermont really well.”

Fluffy the Floating Cloud Bank from Cat Cutillo on Vimeo.