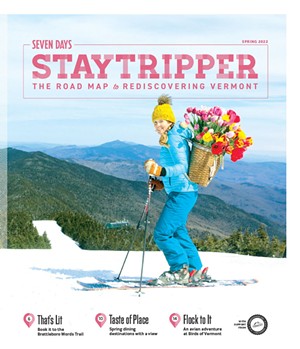 Springtime may conjure visions of cheerful tulips and fuzzy baby lambs in freshly green fields, but let's be realistic: In Vermont, our vernal equinox looks pretty much like winter. The calendar says spring will be in the air soon enough, so we're sniffing it out in this issue of Staytripper, Seven Days' road map to rediscovering Vermont.

Tap in to the sweetness of this transitional time at the statewide Maple Open House Weekend or Killington's all-outdoors Vermont Brewers Festival, both of which return for the first time since the pandemic began. Or see the season change at Huntington's Birds of Vermont Museum, where avian enthusiasts can catch sight of migrating species.

But watch out for mud! Though it's tempting to break out the hiking boots at first thaw, we're sharing tips from Vermont State Parks staff on how to choose your outdoor adventures wisely. Until the higher-elevation trails are ready, allow us to suggest the Brattleboro Words Trail, a literary celebration of southeastern Vermont.

We've also got three scenic dining destinations for you to try, plus an overnight at the distinctive Wilburton resort in Manchester. By the time Ballet Vermont leaps into action with its Bees & Friends program in May, those tulips really will be sprouting.