Floored by the Door

One “Alice Eats” eatery particularly stood out this year 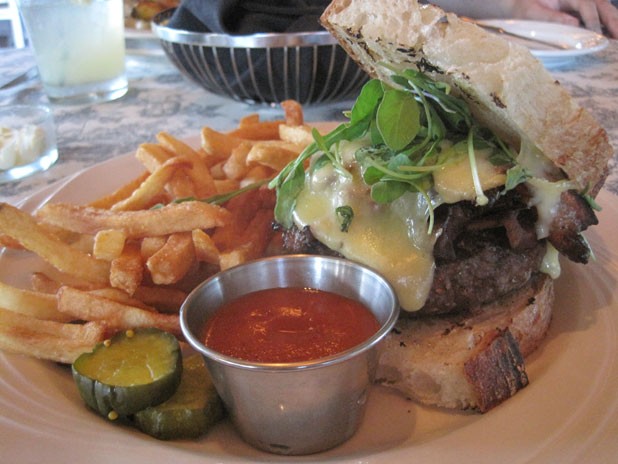 I visited close to 70 restaurants this year. It’s rare that I miss an opportunity to check out a new, newish or new-to-me spot for the paper or my “Alice Eats” series on Blurt, the Seven Days staff blog. Every Tuesday, I review a restaurant where diners can get a meal for two for less than $35. This includes plenty of low-brow fare, but also great deals at places where you could easily impress a date.

Given my gorging all over the state, it’s a true achievement for any restaurant to emerge as my clear favorite of the year. When I visited Waitsfield’s Barn Door Restaurant at 1824 House in August, I had high expectations. They were surpassed. I can’t stop thinking about Chef Luke Stone’s creative use of local ingredients. Putting together a weekly specials menu using products from a single featured farm forces Stone to stretch himself, culinary-wise, and to use optimally of-the-moment ingredients.

Since my meal at The Barn Door, I’ve continued to look compulsively at the online menu and fantasize about making a trip to sample winter dishes such as pork-belly steamed buns with kohlrabi salad; and cassoulet with lamb, duck confit and housemade garlic sausage — made with meat from PT Farm, Hudson Valley Foie Gras and Mountain View Farm, respectively. Here’s my original review of the Barn Door, published on the web on August 31.

In Burlington, when a yen for handcrafted, farm-to-table fare hits, Bluebird Tavern and The Farmhouse Tap & Grill are obvious options. Whether you’re near Waitsfield or not, I recommend that you hightail it to The Barn Door.

The 1824 House, right along Waitsfield’s main drag, was long known as the spot to hit for a formal, European-inflected dinner. Connie and Dean Mendell — of the Village Porch Bar & Bistro in Rochester — reopened the inn this June with a more casual restaurant that strikes both global and local chords. Ever since I saw the menu, I had been gasping to give it a try.

I wasn’t disappointed. How could I have been, given that I showed up during “beef week”? Each week, Chef Luke Stone — a protégé of Maura O’Sullivan and Charles Reeves of Penny Cluse Café — plans several specials around the goods from one local farm. A small sandwich board on the side of the road trumpeted this cycle’s main ingredient: beef from Orb Weaver Farm in New Haven. Though I was tempted by homemade spaghetti with herb-and-shallot meatballs and garlic bread, I decided to try a couple of menu staples instead, made with meats from 1824’s regular suppliers.

But first, there were rolls. Oh, the rolls! Like wheat Easter eggs with a doughy inside and chewy crust. The spritz of butter alongside was the size of my (small) fist, and was not only eminently spreadable but wonderfully creamy and salty.

The grilled bread on which the burger was served was similarly fresh, chewy and, best of all, buttery. The beef, from Gaylord Farm, was roughly ground in-house. If you don’t like your burger a little chunky, this is not the patty for you. The beef flavor was strong and substantial. I would go as far as to say ... manly. My first bite resulted in a gush of juice I had only experienced before when chomping on wagyu.

Though the beef was not from Orb Weaver Farm, the cheese was — the farmstead offering resembled very mild and creamy cheddar. The cheese helped balance the out-of-this-world maple-cured, house-smoked bacon and an assemblage of button mushrooms so crisp and salty they existed merely as an extension of the bacon’s awesome power.

A smattering of greens on top provided a refreshing zip, as did a trio of sweet, house-pickled gherkins. Fries were crisp and came with a container of the house ketchup. Not as fruity as the ketchups made in-house at other local restaurants, this condiment tasted mostly of tomato and onion with just a hint of spice. I also got some garlicky aioli on the side, presented in swirls as if it had come out of a tiny pastry bag.

The housemade bratwurst came with sharp, grainy mustard, but I preferred to enjoy the well-rounded, beer-bolstered taste of the juicy pork on its own. The mild sauerkraut was also delicious and fresh tasting. To further sweeten the deal, the plate was piled with grilled roots, including a perfectly round potato and a petite onion.

Though already full, I had to give a final salute to “beef week” in the form of dessert. Whenever possible, pastry chef Jill Chapman tries to integrate the theme ingredient into a dessert: During cabbage week, there was cabbage-and-cherry strudel with Guinness-caraway ice cream. Another recent menu included candied tomatoes in vanilla syrup with lime ice cream and almond tuile. This week, it was rice pudding made with beef marrow, surrounded by ginger-and-anise-marinated melon. It was my duty as a food writer to try it.

OK, it looked like brains. All rice pudding looks like brains. Get over it. Not all rice pudding tastes like beef fat. The flavor was right out of the barnyard, but still sweet and unquestionably a dessert. Did I like it? I have no idea. It was interesting. Either way, I can’t wait to head back and try more “Iron Chef”-level creativity, using exactly what’s at its prime that week.

The departures of Mark Timms and Sean Buchanan from Norma’s Restaurant at Topnotch and Stowe Mountain Lodge, respectively

Best pizza not served in a restaurant:

Best advertisement for a Vermont vacation: