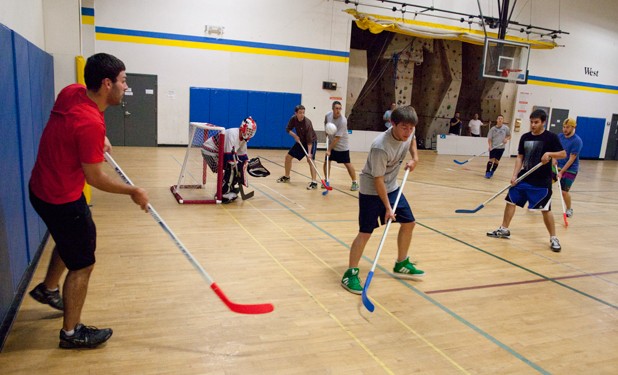 Ron Stewart is on fire tonight. With seven minutes and 14 seconds left in the first period, he picks up the momentum from goaltender Pierre Heroux’s stellar save and scores for the Royals, deftly maneuvering his stick as his ponytail swishes against his back. By the time the clock reads 1:21, Stewart has scored again, and then once more at 1:19. It’s Royals 6, Ducks 5 at the buzzer.

Stewart’s trimphant team doesn’t skate off the ice — there is no ice at the Edge Sports & Fitness in Essex. This hockey game takes place upstairs in the gymnasium, where the squeak of sneakers against the floor and the faint odor of sweaty shorts bring a flood of memories of painful PE classes, circa 1985.

Yet everyone participating in this coed floor hockey session on a Wednesday night is all grown up, and everyone seems to be having a great time. How is it different from yesteryear’s gym-class floor hockey?

“Honestly, it’s not,” says Alex Dees, the Winooski-based president of Vermont Floor Hockey. “It’s a learning process for everyone — but that’s the best part of it.” Experienced players and newbies can play together, he explains. “We try to keep it even to give all the players an equal opportunity to learn.”

Floor hockey is scoring an increasing number of participants in northern Vermont. Founded in 2002, the Greater Burlington Floor Hockey Club is now known simply as Vermont Floor Hockey and has expanded to include leagues in Montpelier and, new this fall, St. Albans. Founding member and club treasurer Mario Dupigny-Giroux reports that the additional gym time available at the Edge in Essex has caused the number of teams in the Burlington area to more than double in the past decade.

You could chalk up floor hockey’s popularity to an aging population, too.

“I see players who are too old for ice hockey,” says Dupigny-Giroux, who, like many players with Francophone names on the rosters, grew up playing street hockey in Québec and found floor hockey a more physically appealing option for indoor action.

For one, it’s less demanding than its rink-bound counterpart. “Floor hockey is more relaxing and not as strenuous and competitive,” says Colchester’s Devin Laferriere, a 29-year-old Burlington league player on the Ducks team. He also plays ice hockey, but finds the floor version a smoother transition from his job as the warehouse and operations manager at Coca-Coca Northern New England. “It’s easier to go to at night after a long day at work,” he says.

Though Essex Junction’s Pasquale Di Stefano claims that hockey is in his blood — he was born in Montréal — he sheepishly admits that he can’t skate very well. So when goalie Heroux mentioned floor hockey to him 10 years ago, “I went nuts and told him that I wanted to join the league right away,” Di Stefano says.

At age 41, Di Stefano is still playing, finding sufficient challenge in the endurance and stamina demands to keep him hooked.

In that regard, floor hockey can be more demanding than its counterpart, as the high-scoring Stewart, who grew up playing street hockey in Montréal, explains. “I also play ice hockey, and I find that at the end of an hour, I’m way more exhausted [in floor hockey],” he says. “It’s just constant running — you can’t glide around and take breaks.”

You also can’t get checked into the boards, or find yourself in fisticuffs; Vermont Floor Hockey rules focus on safety and good sportsmanship. High-sticking and slap shots are strictly prohibited. And, while the field of play stretches around the entire gymnasium, players are not allowed to step into the “crease” near the goalie, as they are in ice hockey.

Beyond the goalie getup, floor hockey is dirt cheap, thanks to the $25 sticks (supplied by the club), Wiffle balls and volunteer referees. Floor hockey games have two 25-minute periods rather than three, during which four players are on the floor along with one goaltender on each side.

Given the fast pace of the game, floor hockey players can get their conditioning without an expensive gym membership. “I personally don’t train or prepare for the season,” says Laferriere. “I’m a naturally active person, so I’m fine with the workout, but as the season progresses, I do find myself getting in better shape. The first few games can be tough sometimes.”

Jen Sperry and Shannon Yandow, two of the handful of women who play in the Burlington league, say floor hockey has inspired them to work out more, and the games have become part of a holistic exercise program. “When I started playing, my friend dragged me off the couch and took the cookie out of my hand,” says Yandow, 40, of Essex. “Now, I’m training to run my first 5K and looking forward to it.”

Sperry, meanwhile, fits floor hockey into a weekly regimen of Body Pump, Zumba and yoga. “When I saw ‘floor hockey,’ I thought, Cool, this will be hilarious — a knock-around, make-new-friends kind of thing,” says Sperry, who was surprised at the competitive vibe.

“Some people are more serious than others, and so the game gets intense sometimes,” Yandow adds. “When people get intense, others usually remind them to calm down — it’s just a game, and we’re all there to have fun. That usually does the trick.”

In case it doesn’t, there are postgame gatherings to help players chill out after a heated night on the floor. Dupigny-Giroux says that an unwritten rule of the league is for the two teams to shake hands at center court at the end of the game. With many players gathering for postgame fare at Burlington watering holes, friendships form on and off the floor. Ducks goaltender Adam Pudvah, 34, of Starksboro says he has a “good competitive relationship” with other goalies and has met new people he considers friends through floor hockey.

“I’ve made some new friends, I’m able to get out and play and get some exercise, and I have an overall love for the game,” says 37-year-old Barre resident Jon Marshall, who plays in the Montpelier league. “And it helps cure the cabin fever a bit in the winter.”

The original print version of this article was headlined "Floor Sure"