Flood in the Fizzy Factory, A Song for the Troops 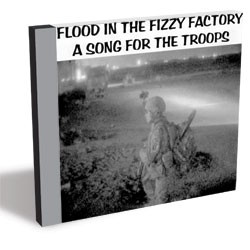 For now, let’s stick with the answerable. Flood in the Fizzy Factory is a quartet composed of bassist Howard Ring, drummer Bob Greenlese, keyboardist Jim White and guitarist/ringleader Dave Kleh. Troops is the band’s second release, following their self-titled 2008 debut. However, it’s their first effort in the current configuration. Gone is “Sherman,” the drum machine whose robotic chops largely (and suspectly) defined their initial attempt. As fond as original members White and Kleh undoubtedly were of Sherm’s work, Greenlese’s flesh-and-blood rhythms are a notable improvement, adding a welcome human quality to FFF’s bizarro New Wave stylings.

Led by Kleh, FFF present a ragged but oddly endearing take on the genre. A real estate agent by day, Kleh makes a surprisingly compelling front man, delivering somewhat rudimentary and (intentionally?) obtuse musings in the casually dry tone one might expect from, well, a real estate agent. But it works for the most part.

FFF bear a clear affinity for the Talking Heads and front man David Byrne. We know this because Kleh spells it out on the record’s second track, “Eniac.” Over a bubbling electronic harpsichord line, he sings in a barely melodic near-monotone, “David Byrne, we need you, man, / Please stop making sense again. / Donald Fagen, please come back / we’re sick of hearing all this crap.” Especially as indie rock increasingly turns toward 1980s New Wave for inspiration, Kleh’s clever apathy, and FFF’s general lo-fi bent, would likely go a long way with the hipster set. How’s that for irony? Realtor chic, anyone?

The title track owes a debt to the electro-punk dub of London Calling-era Clash. Curiously, Kleh’s vocals are set deep in the mix, while the primary melodic work is set forth by what sounds like an electronic pan flute. Consider question two from the opening paragraph answered.

“Embers” starts strong but falls victim to uncomfortable earnestness from Kleh. Unfortunately, what begins as a relatively straightforward rocker devolves into limp psychedelia, highlighted (lowlighted?) by a poorly executed vocal call and response at the finale.

“Obscure” is an electro-fueled rant against hipness that might be so uncool, it’s actually kinda hip. See “irony” above.

Though the quickie impromptu jam “Martian Sailor Song” technically closes the album, “In the Days to Come” is really its last song. The seven-minute epic is alternately goofy, strangely poetic and charmingly geeky. In other words, it is Flood in the Fizzy Factory in microcosm.