Flight of the Conchords' Bret McKenzie Gets Serious, Sort of

Bret McKenzie knows how to tell a joke. Half of New Zealand musical comedy duo Flight of the Conchords and an Oscar winner for his song "Man or Muppet" in the 2011 film The Muppets, McKenzie has built a career on mixing humor with his prodigious musical talents. So, it was something of a surprise when McKenzie released his debut solo album this year and it was tellingly titled Songs Without Jokes.

McKenzie is known for songs about racist dragons and for rapping under the pseudonym the Rhymenoceros, so opening a record by referencing climate change and weeping mothers before singing "This world is broken" is a bold move. On Songs Without Jokes, he's crafted a mature, world-weary album that sonically delves into the rich, late '70s vibe of songwriters such as Harry Nilsson and Randy Newman. It's all part of his progression as a songwriter who "never stops learning" and finding new ways to engage with his listeners, he said.

Seven Days talked with McKenzie about his new (somewhat) serious music just before he hopped on a plane to Burlington ahead of his tour, which kicks off at the Higher Ground Ballroom in South Burlington on Friday, October 14.

SEVEN DAYS: So, to borrow a phrase, why so serious? What inspired you to stop joking around on the new album?

BRET MCKENZIE: I think it was a little bit of a reaction against what I had been working on. I do a lot of songs for films, and I love doing that, but I wanted to try something different. So I'd be at home writing songs after the kids went to bed, and I'd realize they weren't too funny, they were this ... other thing. They wouldn't fit with Conchords or the Muppets or Simpsons; they were just their own thing.

SD: Was that an easy thing for you to do, or was it nerve-racking to ditch the jokes?

BM: Well, doing comedy songs is a bit of a shield, where you're protecting yourself with the joke from feeling exposed. I really admire songwriters who can put themselves out there and create this honest connection with the audience. It's just so powerful.

I came to that late in the game as a songwriter. Now I look at my heroes, like Bob Dylan and Paul Simon or Bill Fay — he's a great British songwriter — and they're so open and exposed that it's really disarming. Dylan especially ... He cuts through a song with his truth and then hides away again, so you as a listener don't really know what's going on. It's just so cool to play with truth as a songwriter. That's probably the biggest difference between writing these songs and my comedy stuff.

SD: The songwriting and production have such a late '70s, West Coast feel. Was that a deliberate thing, or did the songs just inform the style?

BM: It's a serious record, but there's still a lot of playfulness in there. It definitely connects sonically with the music I've always loved, especially those great '70s tones you'd get in a Leonard Cohen record or something. It's funny; after we started recording the album and it was really sounding like the '70s, I wanted to make it more contemporary, but I guess I only got as far as the '80s. [Laughing]

I wanted to catch the vibe of when synthesizers were first really hitting the scene, like those great Vangelis synths in Blade Runner. I got to know all these great session musicians in LA over the years, like Leland Sklar, who played bass with Phil Collins. We were working on a song in the studio, and he hits this chorus pedal, and suddenly we're in an arena in 1983. It was fantastic! So there were a lot of little cool things that went into the record's sound. 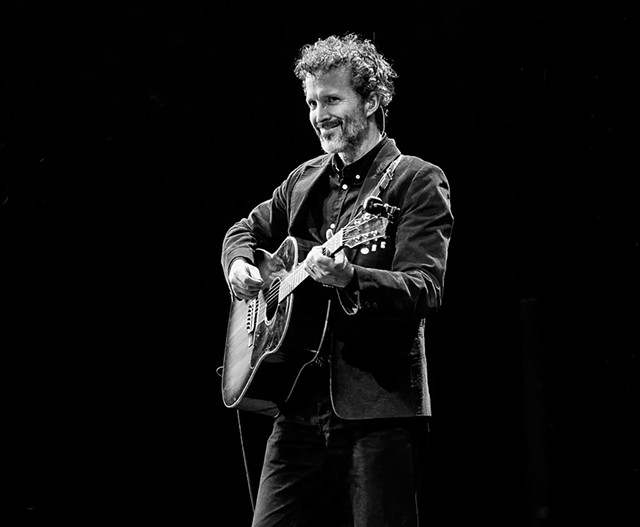 SD: With such a successful career playing comedic music, are you nervous about touring a record without any jokes?

BM: When I started planning the tour, I wasn't sure what it would be at first. We just did a tour of New Zealand, though, and we ended up having a mixture of comedy and the new songs. I can't help myself doing gags in between songs. So I sprinkle in some Conchords songs, some Muppets stuff, as well. My drummer calls it a variety show.

Until we had done that tour, it had been so long since I'd played a show. I haven't played in the U.S. in five years, I think. Coming out of the pandemic, everything has been so isolating, with phones and Zoom and all that, especially in New Zealand, where we really shut down during it all. Playing those shows was so fun and so powerful, just being in a room with actual people again.

That's a big part of this tour. I want to wake audiences up and bring them into the show itself, which comedy is really great for. I'm doing this thing in the shows now where I try to write a song on the spot with an audience member.

SD: Oh, man. Has that actually yielded anything good?

BM: [Laughing] Well, it can go very badly, that's for sure, which is almost funnier, you know? Sometimes it goes well, but it's really just about trying to keep people on the edge of their seats. The first time I did it, I didn't even tell the band. They're all staring at me and saying "What the fuck are you doing, man?" It was great.

SD: So now that you've taken a serious turn, will you ever go back to comedy writing?

BM: Oh, definitely. I never stopped! I'm really excited to write more comedy songs. Doing this album has given me more energy to write funny stuff. I take what I've learned and apply it. I'm working with this great songwriter on a film right now, Linda Perry. She's a really truthful, heartfelt kind of writer, whereas I'm often like, "Hey, what's a funny rhyme that could go here?" But I'm learning it can be both and that it all just informs the process. For me, it's about exploring all the sides of songwriting.