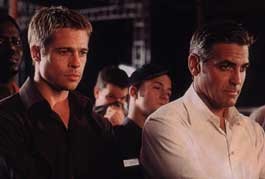 Since November 16, Harry Potter and the Sorceror’s Stone has been raking in the big bucks. The Fellowship of the Ring, coming December 21, should be another blockbuster. Wedged in between those wizards and hobbits, Focus is a fictional but far less phantasmagoric movie — also depicting good versus evil — that opens this week in Burlington.

Adapted from a 1945 novel by playwright Arthur Miller, the independent picture about intolerance in World War II America retains an old-fashioned flavor. This is the kind of earnest, straightforward filmmaking of yesteryear that has a point to make. Director Neal Slavin leaves few doubts as to where he believes the audience’s sympathies should fall: on the side of the angels, of course.

Lawrence Newman is no angel. As played by William H. Macy, this passive Everyman succumbs to cowardice when people suddenly suspect he’s a Jew. The mistaken identity begins after Newman dons a pair of wire-rimmed spectacles to correct his deteriorating vision. Apparently too stubborn to simply stop wearing them, he endures all sorts of indignities — including a demotion from his job as a personnel manager — but never speaks out against the anti-Semitic zeitgeist. When he marries a fellow blonde Christian (Laura Dern), Newman finds only temporary respite from his demons.

Things get much worse on his Brooklyn street, where a next-door neighbor (Michael Lee Aday, the rocker once known as Meat Loaf) is an outright bigot. He urges Newman to prove himself by joining an underground vigilante organization with overtly fascist methods. This group regularly harasses the authentically Jewish shopkeeper on the corner, played by David Paymer. Despite this charged premise, Slavin allows the suspense to dwindle away. Macy’s mild-mannered dweeb gains courage, but Focus never becomes electrifying entertainment. Still, it’s a thought-provoking morality tale that resonates in the contemporary context of racism.

I remember a poster found in most New York City subway cars during the 1960s that read: “Ecidujerp. That’s prejudice spelled backwards. Either way, it doesn’t make sense.”

Newman’s image problem reminds me of when Pol Pot’s army seized power in 1975 and began killing anyone who wore eyeglasses in the idiotic belief it would eradicate all educated Cambodians. The purge was part of a ruthless campaign to turn the clock back to what they called “Year Zero” by creating a slavish peasant society. It was narrow-minded wrath against those who might think for themselves. The Khmer Rouge would have loved the Taliban.

When Focus premiered at September’s Toronto International Film Festival two days before the terrorist hijackings, Macy explained at a press conference that he’d initially felt too “über-Lutheran” for the role of Newman. Pointing out that bias is completely irrational, Slavin had asked him, “Who better?”

The cast members discussed homophobia and the ongoing Catholic-Protestant “troubles” in Ireland. “Our movie is not just about anti-Semitism,” Paymer suggested. “It’s about hatred in the universe that gloms onto any religion or race or ethnic group.”

He could have added “progressive ideas” to that list of targets. Most wholesale hatreds point to ignorance, the subject of so much great cinema. Inherit the Wind has a savvy line of dialogue, as attorney Clarence Darrow addresses the judge during the 1925 trial of a high school biology teacher being prosecuted for covering evolution in his Bible Belt classroom: “And soon, Your Honor, with banners flying and drums beating, we’ll be marching backward — backward through the glorious ages of that 16th century when bigots burned the man who dared bring enlightenment and intelligence to the human mind.”

Macy, whose Vermont connections include his Goddard College alma mater and the getaway home he built in Woodbury, brings intelligence to everything he does in show business. Although not completely wild about Focus, The New York Times praised the atmospherics and the acting: The “movie’s surreal style, with its film noir camerawork and ominous lighting, turns the story into a fable about fear and nonconformism, and Mr. Macy’s and Ms. Dern’s carefully shaded caricatures match the mood.”

At first, Macy was unsure how to convey Newman’s long struggle to heed his own conscience. “I thought, ‘This is our protagonist?’ It was hard to figure out what the objective is for the character,” he revealed in Toronto. “I decided he’s a guy who feels, ‘This is not my fight.’ But the punchline is: It’s everybody’s fight.”

Accordingly, the press conference had a light moment of acknowledgment, as Slavin put on his glasses. Uber-Lutheran Macy saluted him with “L’chaim.”