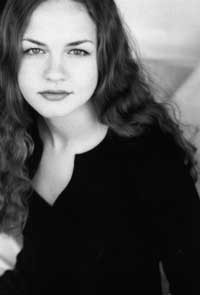 Nora Jacobson never seems to rest. While most of us were frittering away the holidays on festive pursuits, the Norwich filmmaker was laboring at her craft. She began shooting Out of Her Mind on November 13 in New Hampshire and Vermont, with some scenes at the Statehouse slated to give genuine legislators a chance to emote. After a brief break for Christmas, the production was scheduled to wrap on January 6.

New Year’s Eve found the dedicated crew at Montpelier’s First Night for a concert sequence involving a “fire organ.” When its 250 or so stainless-steel tubes are heated by a propane torch, sounds emanate from this musical instrument which figures prominently in the story.

The plot concerns 17-year-old Emma, whose best friend has been killed in a car crash after a drinking party in the woods. “Her life is thrown into turmoil by grieving, guilt and denial,” explains Jacobson, who wrote the script. “So she starts hanging out in a workshop with Sonny, while he makes the fire organ. Her dad is freaked out by this because Sonny has a psychiatric history, but the relationship isn’t sexual. It’s two lost people helping each other.”

Morgan Bricknell, a Middlebury College grad from Newark in the Northeast Kingdom, plays Emma, who has a part-time job in the Statehouse cafeteria. George Woodard — also in Jacobson’s debut feature, My Mother’s Early Lovers — is Sonny. The cast includes the ubiquitous Rusty DeWees as a politician and Burlington folksinger Rachel Bissex as Emma’s mother.

Lasse Toft, a Danish cinematographer, is behind the digital video camera. And a French “fire artist,” Michel Moglia, made his first visit to the United States to build the organ.

Jacobson’s film company is called Off the Grid. Out of Her Mind, which she’ll now edit on a computer, will soon be out of her hands and looking for a distributor.

As usual, TV has been a vast wasteland during the Christmas season, but you might want to check out “The Guardian” on January 15. The guest star on this Tuesday night CBS drama is a Los Angeles resident by way of Middlesex: Amanda MacDonald, daughter of acting coach Jock MacDonald and his wife Betsy. Now 20, she was a freshman at New York University before heading west “to have the real-life experience.”

Amanda’s agent sent her out to some prestigious, albeit unsuccessful, auditions: For TV, “Family Law,” “Boston Public,” “Judging Amy” and “Popular”; in a movie mode, an upcoming Goldie Hawn-Susan Sarandon picture called The Banger Sisters.

Then Amanda hit pay dirt. “The Guardian” centers on a yuppie attorney — portrayed by Simon Baker, now nominated for a Golden Globe — who must work as a child advocate because of a community-service sentence after his drug bust. In her episode, shot in late November, Amanda is teen-ager Wendy Weiss, one of two sisters sexually abused by their father. The older girl kills herself and Wendy is driven to self-mutilation.

“I have a lot of high school friends who went through things like that,” Amanda says of the perceptions she was able to bring to the role. “I had my own time of being depressed about things — boys and all that stuff.”

In her first venture as a professional, the experience was positive. “I had a blast,” recalls Amanda, who until recently paid the bills like so many other Hollywood hopefuls — with a job at Starbucks. As a young Yankee trying to conquer Tinseltown, she’s in good company: Williston’s Ariel Kiley, daughter of Grace, played a doomed prostitute in the most controversial episode of “The Sopranos” last year. Dorset’s Charlotte Ayanna, Miss Teen USA 1993, is currently on the big screen in Kate and Leopold.

Even though she spent several years of her childhood in California, Amanda still considers herself “a Vermont girl.”

Her dad, meanwhile, is now out on video. The Basket, a 1999 film in which he appears with Peter Coyote and Karen Allen, had a limited theatrical release before becoming available for your VCR. It’s a tale about anti-German fervor in the Pacific Northwest during World War I. Jock MacDonald plays a bigoted farmer.

The father-daughter approach of the MacDonalds could give Vermont a January edge in the entertainment business.