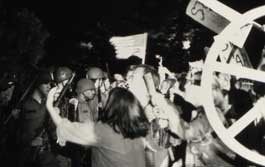 Adolescents are often dazed and confused, but 17-year-old Matthew Lazarus has a vision sharp enough to slice bread. The Essex Junction resident’s brash brio is evident when he speculates on the instant success that awaits him as a filmmaker.

“I know that Suburbia Burning will make it,” says writer-director-producer Lazarus, referring to the debut feature he plans to shoot primarily in his hometown this summer. “If not, my next picture will have a higher budget and that’ll make it.”

His script concerns teens in rebellion against the kind of leafy community that has come to represent dull complacency. One character is “a benign anarchist,” he explains. Another “goes from juvenile-delinquent antics to assault, arson and murder.”

Ask Lazarus to describe the plot of Jingle Hell — his 30-minute collaborative project that screens at this weekend’s Fledgling Film Festival in Burlington — and he doesn’t hesitate: “A young boy’s obsession with Christmas that takes him on a darkly psychotic winter wonderland tour in the middle of July.”

After dropping out of high school in his junior year, Lazarus initially thought about becoming a stand-up comic. On a whim, he attended the Fledgling Films Summer Institute, an annual program for young cinéastes launched by Jay Craven and Bess O’Brien of Kingdom County Productions. The kids join forces to create shorts; three of last summer’s efforts are included in the festival.

“Working as a group is not my thing,” Lazarus acknowledges, “but it inspired me to do Suburbia Burning.”

Moreover, he met a New York University film student working as a Fledgling counselor and assistant director on Jingle Hell. “She is precisely the kind of person I want to fall in love with some day,” Lazarus says of this 22-year-old muse whose hip credentials persuaded him to forego the stand-up-comic route to fame.

Remarkably film-literate, Lazarus can rattle off names that would probably be unfamiliar to most of his generation: D.W. Griffith, Fritz Lang, Sidney Lumet. “You can only tell genius, like, 50 years later,” he suggests. “I’ve learned that from Orson Welles and Stanley Kubrick.”

Although born in South Korea and adopted as a baby, Lazarus maintains that his ethnicity is Eastern European Jew. “I’m the greatest Jewish magician of all time — not excluding Harry Houdini.”

Abracadabra: After raising $12,000 for Suburbia Burning — thanks to the largesse of friends and relatives — Lazarus is even handing out promotional T-shirts designed by his artist father, Douglas. The enfant terrible anticipates a cast of 20, a crew of six and a 15-day shooting schedule. “It’s an economy budget, not a low budget. That’s supposed to be the great promise of digital video,” he declares, leaping up from his seat for emphasis. “It makes everyone a film democrat.”

Nothing is likely to deter Lazarus, who blazes with intellectual intensity. “I’ll finish this film, even if I have to make it with sock puppets. If I die, my ghost will do it,” pledges the lad whose biblical last name is in fact associated with rising from the dead. “Right now, I’m just a kid in Vermont pressed against a plate-glass window, looking in. If I make a movie that generates any heat whatsoever, it’s gonna change my paradigm.”

The paradigm of the first-ever Fledgling festival, unspooling Friday and Saturday in City Hall Auditorium, centers on 56 narrative shorts, documentaries, animations and experimental fare by, for and about young people. With categories such as “Questioning Authority” and “Who I Am,” the event is sure to tap into some major ’tude.

One nonfiction selection, No Loitering, will provide a glimpse of Alaskan attitude — specifically in a little island burg called Sitka, where isolation helps fuel teen angst. The Oscar-nominated Promises is a particularly timely look at the tragic Israeli-Palestinian impasse as seen through the eyes of children on both sides.

kent get enough: An earlier conflict — the “war at home” as combat raged in Vietnam — is the subject of Jay Craven’s The Year That Trembled, opening this Friday at the Nickelodeon. Set in the early 1970s, when the Ohio National Guard killed four unarmed protestors at Kent State University, the picture won an award at the recent Cleveland International Film Festival. A Buckeye State review hailed it as an “elegiac, well-acted ensemble drama,” in which Craven “adroitly juggles multiple characters, like Robert Altman with an extra dose of gentle humanism.”

For information on the Fledgling Film Festival, call 592-3190.

'Call to Action' In Winooski As Outbreak Takes Shape