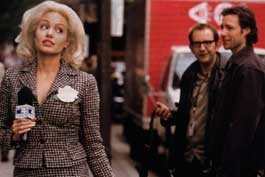 It could be a movie: In lower Manhattan, we see the billowing smoke and dust of the World Trade Center collapse. The camera zooms in on a young man in a gas mask hurrying north. He schleps a mound of video editing equipment along chaotic city sidewalks, intent on reaching the relative sanctuary of Greenwich Village.

The refugee in question was Mike Gordon. Not long after September 11, the Phish bass player decided to relocate the editing suite at his TriBeCa loft — only 10 blocks from Ground Zero — to the apartment of a colleague. Everything south of Canal Street was off limits to non-residents. By moving the cutting-room operation to her neighborhood, they could continue working together, without gas masks, to shape his 87-minute rockumentary, Rising Low.

“The air downtown was terrible for weeks and weeks,” explains Gordon, whose New York home escaped damage despite its proximity to the twin towers.

Rising Low chronicles historic 2001 recording sessions for a two-volume Gov’t Mule album, The Deep End, and profiles the jam band’s late bassist, Allen Woody, who died of a heart attack in August 2000 at age 44. Gordon is tweaking the footage right now, in preparation for a second public screening next month at the Newport International Film Festival in Rhode Island. It premiered in March at the South By Southwest Festival in Austin, Texas.

Funded by Gov’t Mule’s record label, ATO, the documentary reflects Gordon’s experimental approach to the medium. “I was generally trying to push whatever limits I could,” he says. “I shot in video and Super 16. I had a spy camera that could be positioned on the bass and an aura camera to capture the electrode signals from skin.”

He was capturing some rather legendary auras. Gov’t Mule invited guest musicians such as Phil Lesh, Gregg Allman, Jack Bruce, Flea, John Entwistle and Bootsy Collins to play on the album as a tribute to Woody. Paul McCartney wanted to attend, but “just couldn’t fit it into his schedule,” Gordon recalls.

Some 22 bass players performed at various points during sessions held near San Francisco, in Los Angeles and in New York over a period of several months. Gordon was one of them. He and also co-authored a song, “On the Banks of the Deep End,” that inspired the CD’s title.

Woody and guitarist Warren Haynes, both veterans of The Allman Brothers Band, launched Gov’t Mule in the mid-1990s with drummer Matt Abts. “They didn’t know what to do after Allen’s death. When you lose one third of a trio, it’s pretty difficult to go on,” says Gordon, adding that he conducted a number of interviews for the film. “I talked to his father, widow and daughter. And I had a lot of archival material: Woody family home movies, the band on the road.”

Few documentaries ever open in theaters, so the festival screenings of Rising Low are geared to promote the VHS and DVD versions that will be released in the fall. Meanwhile, Gordon does not necessarily see himself returning to that genre. “I’d like to make another dramatic film at some point,” he says, referring to his freewheeling 2000 feature debut, a mock infomercial called Outside Out... “This time, though, I want to write a script first.”

His neglected music career is also tugging at him. Gordon is studying “1950s-style” bluegrass banjo and collaborating with guitarist Leo Kottke. “We’re writing songs and recording together. But I’m still working on the soundtrack CD for Outside Out... That’s the trouble with being a Gemini,” suggests Gordon, who turns 37 in early June. “I always have 10 interests I’m trying to prioritize.”

SHORT TAKES: Vermont screenwriter John Fusco, whose Revolutionary War-themed Rebels is scheduled to start shooting this summer, reports that Jim Caviezel has been signed for the lead role. “At six-foot-three, he has the stature to capture Ethan Allen,” Fusco says of the Count of Monte Cristo actor currently featured in High Crimes. “He is also a master swordsman and accomplished equestrian.” In addition, Fusco does a bit of setting-it-straight about a Burlington Free Press article that erroneously reported the movie will not be shot in Vermont. “That is not true,” he points out, acknowledging that Slovakia will be the backdrop for a significant portion of Rebels. The current exchange rate — nearly 47 Koruna to the U.S. dollar — is an economic enticement.