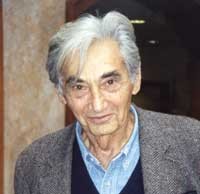 “If you don’t know history, it’s as if you were born yesterday,” suggests Howard Zinn, because such people are “likely to believe anything they’re told.”This salient observation is part of a documentary that examines the life of the 80-year-old educator, activist, author and playwright who always questions what he’s told.

Tentatively titled Howard Zinn: A Disobedient History, the film is a work-in-progress by Burlington native Deb Ellis and Chicago-based Dennis Mueller. In their fundraising efforts — to meet a $140,000 budget — they are hosting a benefit performance by political satirist Barry Crimmins Thurs-day night at Club Metronome in Burlington.

“Making this film seems to fit with who I am,” explains Ellis, who collaborated with Mueller 12 years ago on The FBI’s War on Black America. “And we’ve found that Howard’s life is so emblematic of the entire 20th century.”

As an impoverished boy from Brooklyn, Zinn became an avid reader, despite the fact that there were no books in his cramped tenement household. An early and fortuitous introduction to Charles Dickens helped him realize that poverty was a worldwide problem. He later discovered America’s hidden history, including numerous labor movement sagas, and began a lifelong campaign for social justice.

Biographical details are juxtaposed with off-camera readings from Zinn’s work by actor Matt Damon; he and fellow movie star Ben Affleck are devotees of the man who has inspired generations of idealists. Novelist Alice Walker, contrarian thinker Noam Chomsky and Daniel Elsberg of Pentagon Papers fame are among those singing the octogenarian’s praises. Montpelier resident Dave Dellinger, a Chicago Seven alumnus, also appears as a talking head.

“Howard was with us, with the students,” recalls Walker, who was an undergraduate at Spellman College in 1960s Atlanta while Zinn taught there during the early stages of the civil rights movement. Ironically, he was fired from the all-black — but staunchly conservative — school for protesting Southern segregation.

That attitude also drove his opposition to the Vietnam War. By then, Zinn was teaching history at Boston University, where he eventually faced a formidable nemesis: a BU president named John Silber, who tried to discredit the tenured professor.

“He was limited,” Zinn quips, when someone asks about Silber’s efforts to smear him. “He had no nuclear weapons.”

This is a tireless and effective Don Quixote with charm to spare. Tall, white-haired, with a chiseled face and expressive dark eyebrows, Zinn speaks hard truths in a soft New York accent.

“What’s truly remarkable is Howard’s connection with young people. He was a mentor to us and now to them,” says the 52-year-old Mueller, who traces the documentary’s genesis to 1997. Jet-lagged in London, he bought a collection of Zinn’s essays to read himself to sleep. Instead, it awakened him to the idea of a cinematic profile.

Mueller recruited Ellis, who had lived for more than a dozen years in the Windy City, where she did graduate work in film studies at Northwestern University. They began shooting Zinn wherever and whenever possible, while also tracking down anyone who might offer commentaries about him. Sometimes this was accomplished through what Ellis, now 46, calls “piggybacking”: As Mueller did “hired-gun” work around the country on more mainstream productions, he was periodically able to interview people for the documentary.

Archival footage that illustrates the chronology came somewhat easier. “I’m a film researcher,” says Mueller, who has amassed a considerable collection of material over the years.

Any spotlight on Zinn would seem to have a natural following. His 1980 book, A People’s History of the United States, has sold one million copies; Damon and Affleck are rumored to be turning it into a mini-series for HBO.

Meanwhile, Zinn and Peacham director Jay Craven are collaborating on a script about anarchist icon Emma Goldman. Marx in Soho, a Zinn play that was captured on camera by Ellis and Mueller, is about the philosopher who co-penned The Communist Manifesto. The L-word — leftist — is not anathema in these circles.

“We didn’t set out to create a polemic,” Ellis cautions. “Even my uncle, who is not at all sympathetic to alternative ideas, watched the film and thought it was really interesting.”