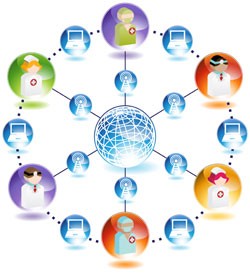 This week Vermont’s largest hospital will launch the first phase of a new electronic health records system that promises to reduce medical errors, improve patient care, lower health-care costs and make the hospital more efficient. The $58 million paperless chart system is known as PRISM, short for Patient Records Information System Management, and it’s been in the works for more than two years. On the wall inside Fletcher Allen’s McClure Building, a large, red clock counts down the days, hours, minutes and seconds until the PRISM electronic health records system “goes live” on Saturday, June 6.

But unlike revelers on New Year’s Eve, hospital administrators are keeping their fingers crossed that no one drops the ball when the counter reaches zero. “The proof is in the pudding when we flick the switch,” says Sandi Dalton, senior vice president for patient care services at Fletcher Allen Health Care. Dalton is overseeing implementation of the electronic records system, which is the first of its kind in Vermont. Except for the presence of more computer workstations throughout the hospital, she says most patients probably won’t notice any difference in the way they are cared for.

In contrast, PRISM will dramatically change the way doctors, nurses and other health-care providers track and record their patients’ progress, Dalton says. No longer will medical orders be scribbled on cumbersome charts that must accompany patients wherever they go in the hospital. Instead, patients’ medical histories, directives, drug prescriptions and progress will all be recorded and tracked electronically in a centralized database that can be accessed anywhere in the hospital, as well as by authorized users in remote locations.

PRISM has the potential to reduce, or even eliminate, one of the most common and costly causes of medical mishaps that occur in hospitals: human error. For instance, PRISM is set up to automatically alert providers of potentially dangerous drug interactions, allergies and dosage particularities. It will also notify providers if a test or medical procedure has already been ordered or performed, reducing the likelihood of costly duplicate tests.

The new system also revolutionizes the way prescriptions are ordered, filled and administered. A “closed-loop medication system” will automatically send doctors’ prescription to the pharmacy, where an automated drug-dispensing machine fills the order. When the drugs are administered, the nurse or other provider will scan the patient’s wristband, as well as his or her own ID badge, to ensure that the right patient is getting the correct medication in the appropriate dosage.

The first phase of this project will affect all Fletcher Allen in-patients as well as anyone who visits the emergency department. The second phase, which comes online in December, will incorporate the oncology department. Phase three, expected to be implemented next year, will add to the system some 40 other ambulatory units throughout the Burlington area.

Eventually, PRISM will allow patients to access their own — or a child’s — medical records from home. For instance, when a parent registers his or her child for school, he or she will be able to go online, download all the child’s immunization records, print them out and provide them to the school.

Not surprisingly, there is widespread concern and skepticism about the privacy of personally identifiable medical data, at least according to polling data compiled by the American Civil Liberties Union. But Dalton, who’s helped hospitals in Pennsylvania and California implement their own electronic health records systems, insists that Fletcher Allen’s electronic records system is one of the most secure in the industry.

Dalton acknowledges that there’s been some resistance among providers to adopt the new system. As she puts it, “If people have never worked in a different environment, or they’ve been in their current environment for a very long time, it’s hard for them to imagine how they can possibly do things differently than they do today.”

On February 17, President Barack Obama signed into law a $787 billion economic stimulus plan that includes some $20 billion in incentives for implementing electronic health record systems. The legislation also includes penalties for doctors who don’t make the switch to electronic records by 2014.

Currently, only 10 percent of hospitals in the country employ an electronic health records system. Among the first to adopt one was El Camino Hospital in Mountain View, California, a facility where Dalton once worked. In 2006, El Camino switched from its 1970s-era electronic system to a new, state-of-the-art system.

Did the transition go smoothly? “Yes and no,” recalls Patricia Aleshire Briggs, president of El Camino’s nurses union. She says the Eclipsys system, which went live in March 2006, caused some disruptions, particularly in the pharmacy department. Aleshire Briggs emphasizes that there were no medical errors or patient incidents caused by the switchover, largely due to the redundant backup systems and other safety protocols in place. Nevertheless, there was enough public concern about the bugs and glitches in the system that the California Department of Health Services came in and conducted its own audit.

Dalton wasn’t part of El Camino Hospital’s initial e-records transition team, but was called in later to figure out what went wrong and how to fix it. Among the most important lessons she learned there was to bring the pharmacy online early to work out the bugs. Medication errors are among the most common mistakes that occur in hospitals.

“There are always some things that are going to go wrong,” Dalton says. “We don’t know exactly what those things are, but we are fully prepared to deal with them.”

Since half of all doctors in Vermont are affiliated in some way with Fletcher Allen, Dalton predicts the new system will go a long way toward improving patient care and controlling medical costs in Vermont.