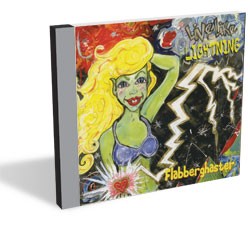 A word to PR scribes in the music biz, and to bands themselves: Please stop touting music as “genre defying,” “genre bending” or “unclassifiable.” It’s misleading. And in all but rare cases, it’s false. Consider Bennington’s Flabberghaster. On its website, the talented young quintet claims to “defy genre.” As evidence, Flabberghaster submit their debut album, Live Like Lightning. The 12-song LP is a bright, rambunctious collection of tunes that is impressive from start to finish. But it doesn’t defy genre so much as it succeeds in a variety of them. Lighting is ostensibly a funk record laced with elements of rock and soul — and just enough jammy wiggle to seduce the noodle set. Rather than transcend obvious influences, Flabberghaster exist comfortably within them. But given how beautifully produced and impeccably performed this record is, that’s not a bad start — particularly for musicians barely old enough to (legally) drink.

“No. 2 Funk Tunnel” sets the album’s energetic tone in a phalanx of elastic guitars and skittering horns. It’s academic funk — technically impressive and compositionally sound but lacking in raw, frenetic emotion essential to the genre. Still, there’s no denying Flabberghaster’s chops, especially those of vocalist Evan Lincoln, who holds court with a smooth, soulful delivery.

The title track is a murky, mid-tempo rocker that showcases lead guitarist Tucker Corry. It’s a nice curveball following the opening track. But the song loses steam during an ill-conceived reggae breakdown midway through — perhaps an attempt to “defy genre,” but one that does little more than duct tape two of them together.

The band rebounds on the following cut, “The Heat.” It’s an appropriately hazy tune evoking breezy 1970s jazz-rock and highlighting Lincoln’s sneakily quirky lyrical prowess. That youthful cheekiness continues on the next track, “Belly Dancer From Mars,” and reappears in numerous instances throughout the record — especially on the irreverent hip-hop-tinged number “The Machine,” Phish-y jam epic “Up High” and the album’s cosmic closer, “Space Chase.”

On Live Like Lightning, most of Flabberghaster’s efforts pay off. As they continue to evolve, they may outstrip their influences, and perhaps really defy a genre or two. Either way, this gifted young band bears watching in the years to come.

Catch Flabberghaster this Saturday, October 8, at the Rusty Nail in Stowe.