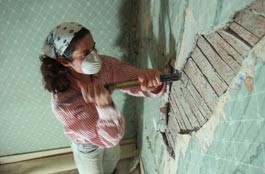 There is a figment of the human imagination called home. For people like me — who hate Martha Stewart but can’t resist flipping through her magazine — the word conjures up romantic notions about leading a beautiful, if not perfect, life. It begins, of course, with having a beautiful house. The need to create a dream home — where everything is newly built or completely refurbished — is a powerful thing. The nesting instinct is, after all, an evolutionary adaptation.

If you have a “This Old House”-style fantasy in mind, be prepared to feather your nest first, because you can count on investing at least six figures. Or if you want to do it “on the cheap,” your in-kind donation will take a serious chunk out of your life. If you have kids, be prepared to sacrifice their childhoods — at least for a while.

But the temptation to embark on an endeavor of this magnitude — one of the time-honored follies of middle-class life — is overwhelming. For years my husband Patrick and I have dreamed of owning a house with some land. A place big enough to accommodate our two children, a dog, a clutch of buff cochin hens, a dozen sheep, a cow and, if we’re lucky, two horses. Plus plenty of space for a substantial berry patch, an orchard, a greenhouse and a vegetable garden the size of a football field.

And so last fall we found ourselves on the decaying threshold of an 1850s farmhouse. Seven months, 19 days and 12 hours of blood, sweat, tears and divorce threats later, the place still “needs TLC” — as a real estate agent would gingerly put it.

We can’t claim we didn’t know what we were getting into. When we signed on the dotted line we knew the following: The electrical outlets and fixtures — half of which were part of an elaborate, 1920s-era knob-and-tube system — were dubious; daylight, and presumably rain, streamed in around the top of the chimney; the foundation needed jacking and the sill was rotten — evidenced by a snow drift that formed under the kitchen sink in the winter; there wasn’t a stitch of insulation in the roof or the walls; the wood floors undulated like waves on the open sea; the spring-fed well had all but stopped flowing; and the porch was about to collapse.

And then there was the “cosmetic” work: six layers of wallpaper, peeling lead paint and windows barely held in by nails.

Still, we comforted ourselves, at least the house hadn’t been dolled up with Formica paneling and shag carpeting. It’s a simple, white, two-story structure with an ell. What we like about the place is its 19th-century purity, its down-at-the-heels, forlorn, even Wyeth-esque quality. The price was right, and it came with two ponds, a decent view and 25 soggy acres.

The day of the closing, our dreams were overwhelmed by the dawning realization that we were signing our lives away. Even with our seemingly pragmatic take on the situation, we had been overly optimistic. Once the house was ours, it was hard to overlook the flaws we had previously glossed over. Think The Money Pit times two, minus the ne’er-do-well construction workers.

The electrical system? Only four outlets worked. The dishwasher and the refrigerator? Props, apparently. There weren’t any outlets to plug them into anyway. The furnace barely hiccupped to life, the cellar floor was more than a little damp, and the ponds were leech-infested.

There are three ways to deal with a predicament like this when money is scarce: You can live with it as is and let it fall down around your ears; you can gradually fix it up over a 10-year period; or you can blast through it as quickly as possible with every dime you earn and pray that you live through it. My husband, an architect and perfectionist, rendered the first two options unacceptable.

The first thing we did was give the house a real-Vermonter winterizing treatment: We enshrouded the entire exterior in a sheath of plastic and pinned it down with blue Dow foam and straw bales.

Next, I began a month-long renovator’s honeymoon period — ripping and steaming wallpaper, scraping paint and patching plaster. Colonies of cluster flies emerged from the 100-year-old wallpaper. I couldn’t keep up with the fly strips. Hundreds of flies immolated themselves in the fresh paint. I now know they prefer polyurethane floor enamel.

Meanwhile, Patrick struggled in the cellar with the “real work.” He shimmied his way into the dirt crawl space to jack the ell. If you’ve ever bellied into a crawl space no more than two feet high, you know the hazards. You can’t turn around, you can’t roll over, and you can’t breathe because the dirt floor is as dry and dusty as a desert. The claustrophobia is nearly unbearable — especially when people walk on the sagging floor above you.

As Patrick doggedly forced himself forward, pushing with his toes, flashlight in one hand and a jack in the other, he came face-to-face with the burrow of some large, fur-bearing-mammal. He swallowed hard and managed to ease his way over it. When he got to the end wall, Patrick sighed in relief and tossed a piece of wood out of the way so he could secure the jack onto a rock under one of the carrying beams. But as the wood landed, Patrick didn’t hear the dull thud on earth as he expected. There was an ominous kersplash, shortly followed by his “Oh, shit.”

Turns out there’s a cistern the size of a bank vault, and full of water, just underneath the kitchen. Probably a watery grave for those furry varmints living in the tunnel deep in the earthen floor. And it probably explains the swarms of mosquitoes that appeared, seemingly out of nowhere, in January.

The good thing about this discovery was that it made everything else seem like child’s play: the blue photon light that came out of the electrical panel when we first turned the breakers on; the cremated remains of the former owner’s dog in a box of hot-tub supplies; the cat skeleton that dropped out of the kitchen ceiling perfectly intact, still in a pre-pounce crouch; the dead birds in the chimney; the rat holes in the walls, floors and ceilings.

We got through the renovation of three bedrooms, the kitchen and the living room in four weeks, finishing the day before Thanksgiving. Then we made a crucial mistake: We moved in.

If you’ve ever lived in a construction zone, you’ll know what I’m talking about. Every time you sand joint compound or cut wood, dust billows through the indoor atmosphere and lands on every conceivable surface. And whenever you paint, zip-strip or apply polyurethane, neurotoxins hang in the air like fog.

Until about two months ago, multiple 100-foot extension cords came out of one outlet like the roots of a tree, running from one end of the house to the other and up the stairs. The tub leaks. None of the doors closes. The house is so out of square that every time Patrick goes to build a shelf or trim out a window he has to fuss over a plumb bob and level, swearing and sputtering. The wall in my office is way off, so the box over the electrical wiring is as curvy as a piece of Noguchi furniture.

The other morning I was sipping a cup of coffee, contemplating the falling plaster in the guest room, when a beautiful shaft of light came through the torn window plastic. I thought, you know, there really is no place quite like home.

In spite of — or perhaps because of — its misery, our old dump becomes more endearing every day. The place has a personality that we’re uncovering bit by bit — old hand-hewn beams, plank walls held together with wooden pegs, tin ceiling and walls in the kitchen. Chances are there will be light at the end of the tunnel — just as soon as we get rid of the woodchuck.