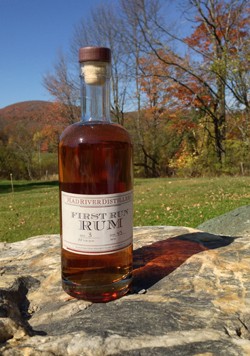 If there’s a spirit intertwined with New England history, it’s rum. Now a new distillery in Warren has joined a handful of Vermont producers that are resurrecting the liquor.

The idea of making apple brandy originally inspired Egan and Little, both Boston attorneys, to order a German-built custom still to occupy a former horse barn on land they own near Warren. After local builder (and friend) Alex Hilton renovated the barn, the pair hired him as head distiller and manager.

While an apple brandy is still in the works — 3.5 tons of heirloom apples arrived at Mad River Distillers last week — the company’s first product is rum made from organic Demerara sugar and aged in American oak barrels for about a month before bottling. In its wake will come a corn-based whiskey incorporating grain from Nitty Gritty Grain Company of Vermont, plus a rye and a bourbon.

Mad River Distillers’ tasting room, at 156 Cold Spring Farms Road, is open to visitors on Fridays and Saturdays from noon to 5 p.m., or by appointment (call 496-6973).

The original print version of this article was headlined "One Love"