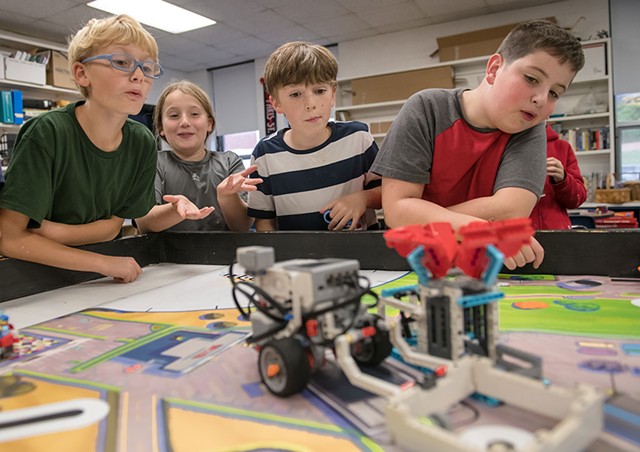 A glass case in the lobby of Westford School displays shiny statuettes that celebrate its students' wins in basketball and soccer competitions. On the top shelf, though, stands a row of more unusual-looking trophies, fashioned from bright yellow LEGO pieces.

Over the past decade, robotics has been woven into the fabric of the small Chittenden County public school, thanks to a group of devoted volunteers, most of them parents, who run an afterschool club and occasionally teach tech-themed lessons in classrooms. One of the volunteers, Mark Drapa — a father of three and an electrical engineer at the semiconductor company GlobalFoundries — said he's proud of the techy culture that's taken root in the community.

As many Westford students participate in robotics as play soccer, Drapa said. Not to mention, "It's totally cool to wear your robotics shirt to school."

Westford's enthusiasm for robotics sets it apart. Many Vermont schools — especially in less-populated, under-resourced parts of the state — don't even offer the activity. But that's likely to change, thanks to a three-year, $375,000 grant from the Argosy Foundation, which was founded by John Abele, an entrepreneur and philanthropist who lives in Shelburne.

The money is meant to help eliminate some of the barriers to starting robotics programs by providing financial support and technical assistance to new teams. And it will enable FIRST in Vermont, a nonprofit started last year to support robotics programming for youth, to hire a state coordinator to increase awareness about FIRST programs, recruit and train coaches, and foster collaboration among robotics teams.

FIRST, which stands for "For Inspiration and Recognition of Science and Technology," has three strands: a FIRST LEGO League for elementary and middle school students, and FIRST Tech Challenge and FIRST Robotics Competition, both for high schoolers. The program was started 25 years ago in Manchester, N.H., by engineer and entrepreneur Dean Kamen, who is best known for inventing the Segway and an electric wheelchair called the iBOT.

Kamen and his collaborator Woodie Flowers, a Massachusetts Institute of Technology professor, wanted to bring the excitement of sports competitions to science, technology, engineering and mathematics, or STEM. So, they designed a program with a gamelike atmosphere that features robots competing in a ring, along with human referees in black-and-white-striped jerseys and cheering real-life spectators. FIRST calls itself a "coopertition" rather than a competition, because teams work in alliances and must help each other in order to succeed. More than 600,000 students in 110 countries now participate. 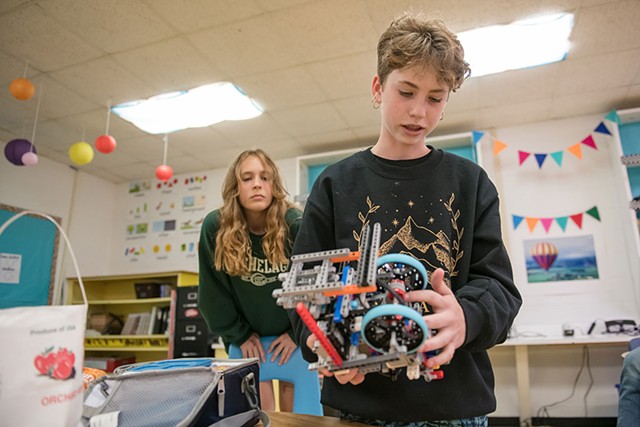 Vermont's first team formed in 2002, and the program has grown slowly but steadily since, with around 30 FIRST LEGO League teams, 18 FIRST Tech Challenge teams and a handful of FIRST Robotics Competition teams now around the state. Not all are based in schools; some are run through 4-H clubs, homeschool groups, churches and makerspaces. The University of Vermont's College of Engineering and Mathematical Sciences and extension programs help organize FIRST Tech Challenge's competitions, while Norwich University hosts the FIRST LEGO League state championship each year.

But Vermont still lags behind much of the country, including New Hampshire and Massachusetts, said John Cohn, a FIRST in Vermont board member and IBM Fellow emeritus. The goal of the Argosy grant is to raise the participation rate of Vermont students above the national average and keep it there.

Cohn — who has been known to dress up in light-up glasses, silly head gear and tie-dye garb for competitions — thinks Vermont's "funkiness" makes it ripe for an expansion of robotics programming. "There's this long tradition of Yankee ingenuity and open-ended, practical problem solving," he said.

On a Tuesday evening in early October, that ingenuity was on display in Westford. Eight fifth graders — members of one of the school's five FIRST LEGO League teams — gathered around a long tabletop game board dotted with 15 colorful LEGO contraptions. The team members, who call themselves the Interplanetary Pizza Pandas, meet twice weekly from September to January to build and create code for a robot that can complete a series of tasks that involve pushing, pulling, lifting, dragging and flipping the LEGO structures. Each successfully completed task is worth a specific number of points.

In February, the Westford teams will go to the statewide competition, where they'll put their bot to the test alongside teams from around Vermont. The team that takes top honors will move on to the World Championship in Houston, a Super Bowl-like event where competitors don costumes and throngs of supporters typically turn out to cheer players on.

Westford students are encouraged to try out different tasks throughout the season. At this practice, fifth grader Owen Mellion used Scratch, a drag-and-drop coding language, to program a robot to carry out a series of actions, while teammates Davide McElvany and Keith Collins tended to the machine — which LEGO calls an "intelligent brick" with a motor and wheels. The students had fastened a square attachment that they'd built to the front of the robot to enable it to carry out some of the tasks. But when they attempted to get the robot to perform, it veered in the wrong direction. The students went back to their laptop to troubleshoot.

Learning from missteps is a key part of FIRST Robotics, Drapa said as he watched. "If it doesn't work, move on and find out what does work," he said. "Any type of experimentation is a win."

"It's really fun to make models and to code." Inez Medick tweet this

Across the table, Inez Medick and Maeve LaBossiere, fresh from soccer practice, worked to program a separate robot.

"It's really fun to make models and to code," Medick said. When her older brother participated in FIRST LEGO League years ago, she went along to his competitions.

Both Medick and LaBossiere hope to continue to participate in robotics when they're older. And because of the continuum of programming in their school district, they'll have that opportunity.

At Essex High School, science teacher Joseph Chase started one of the FIRST Tech Challenge teams in the state 15 years ago. This year, close to 20 students — members of the high school's HiveMind Robotics team — meet three times a week at the school to build and code robots using CAD software and 3D-printed parts.

At this point in the season, the Essex students are still in the prototyping phase, trying to figure out the best design for this year's particular challenge, which involves having a robot place cones on poles of different heights. Challenges change from year to year, but the game always takes place on a 12-foot square game board bordered by foot-high walls.

Sophomores Max Drapa (son of the Westford coach), Mason Meirs, Cheru Berhanu and junior Matthew Corneau are all in their second year of FIRST Tech Challenge. In early September, their team gathered at U-32 Middle & High School in Montpelier with three other high school groups — including last year's state champs, the Champlain Valley Union High School RoboHawks — to watch the video reveal of this year's challenge, the cones-on-poles drill. Then, over pizza, the teams brainstormed ideas for how to approach the task. Collaborating with other teams is part of the "gracious professionalism" that FIRST Robotics says is a centerpiece of its programs. "When you're in a competition, it's not like, 'Oh, you lost,'" Max Drapa said. "You actually learn from it and meet other teams and see what they've done."

Their coach also sees the program as a workforce development initiative.

Chase connects his students with local businesses during the season, in the hope that they'll forge connections that may lead to internships or jobs.

"One of the finest exports from the state of Vermont is our children. They get a great education here, and then they leave," Chase said. But, he added, local companies such as Beta Technologies and GlobalFoundries are looking for young people who have the tech skills that FIRST develops.

Cohn, who now works for Beta, can back that up. He recently took an informal poll of fellow staffers and found that 17 of them had taken part in FIRST programs growing up.

Students can unlock higher ed opportunities by participating, as well. Colleges, including MIT and Rensselaer Polytechnic Institute, offer more than $80 million in scholarships to high school students who've participated in FIRST programs, according to the organization.

Abele, cofounder of Boston Scientific — a medical device company that makes coronary stents, defibrillators and pacemakers — is an enthusiastic booster of FIRST. He learned about the program from Kamen decades ago and served as chair of the organization from 2002 to 2010.

"I think it's really important for all people to be technically literate," Abele said. "This is a fun way to do the learning. You sort of do it without even knowing you're doing it."

Just as importantly, the program cultivates social and emotional skills needed to work well with others, he said.

To Max Drapa, that teamwork is one of the best things about FIRST.

"In class, you have maybe a couple of group projects," he said. But FIRST Tech Challenge is "one big group project."

Talk with representatives from Vermont's FIRST teams — and find out how to start, join or support one — at the Vermont Tech Jam on Saturday, October 22, 10 a.m. to 3:30 p.m., at Hula in Burlington. Hear the keynote presentation with John Abele and Sarah Kalil at 4 p.m. To attend the free event, register at techjamvt.com.