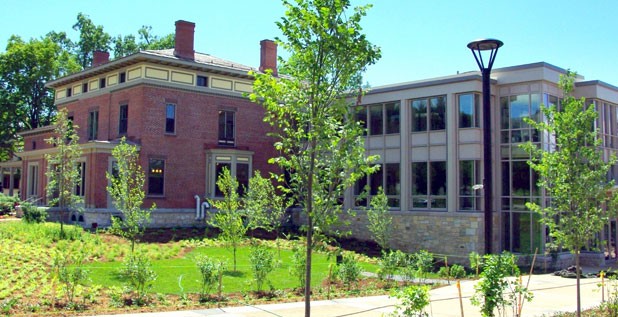 Architecture is really about a simple, almost primary act: You walk through and around a constructed space, and you get a certain feeling. Based on the faces of curious onlookers wandering through the recently completed Perry Hall at Champlain College in Burlington, it’s safe to say the feeling inspired by the new admissions building, named for former college president Roger H. Perry, is one of delight.

Viewed from the front, on South Willard Street, Perry Hall is a beautifully preserved brick house — part of which dates back to 1859 — to which a modern, glass-fronted wing has been added that subtly echoes the original dwelling’s lines and windows. The result fits surprisingly well with the residential neighborhood’s historic character.

From the expansive public lawn in back — the product of an agreement with the city to ensure neighborhood access and eliminate the possibility of future development — the structure looks strictly posh-institutional. A three-story, windowed façade is flanked by two slightly different, steel-column-supported wings that extend on either side of a stone patio filled with café tables. One wing’s roof is a striking, upswept curve that gestures toward Lake Champlain.

The house links the two wings, creating a space that flows without interruption between old and new. But the additions were constructed, notes the college’s public news and information director Stephen Mease during a recent tour, so that “you could actually take all this new stuff off, and the integrity of the house would still be there.”

A wide promenade from Maple Street directs visitors to enter through the north wing. (Designs call for eventually continuing the promenade across the street to a planned dormitory area for 300 to 400 students behind Skiff Hall, the former admissions building.) Once inside, a broad staircase leads you up to the house’s back porch — now an enclosed hallway that preserves the home’s original brick exterior on one side and captures western daylight with that windowed façade on the other. A row of rocking chairs invites visitors to sit and enjoy glimpses of the lake.

Stepping the other way brings you into the restored first floor of the home and its opulent double parlor. Matching gray marble fireplaces mirror each other from opposite wood-paneled walls; period chandeliers are enhanced with state-of-the-art recessed lighting; stately wood trim frames every arch and doorway. Even the original brass door hinges are intricate works of craftsmanship. Placed throughout these and two more meticulously restored rooms — a library and a conference room — is an intriguing display of Vermontiana, culled by the college’s librarians from a collection of maps, postcards, crocks and memorabilia donated by Burlington businessman Lance Llewellyn.

The house is an elegant first stop on what is intended to be an impressive tour for prospective students and their parents. Visitors move on to a presentation hall in the south wing — the one with that upswept roofline — and may explore the north wing and second floor of the house, both of which contain administrative offices designed so that every employee looks out a window.

The ground level provides services for current students. Back-lawn paths lead down to a restored, slate-roofed barn whose original wide floorboards now support computer workstations for the Division of Communication and Creative Media. The last stop is the old caretaker’s cottage, which was moved from its original location south of the house. (A small stone patio preserves its footprint.)

“This was designed to make a good first impression,” Mease understates at tour’s end.

Burlington architect Jesse Beck, a principal with Freeman French Freeman, is impressed. “I think it’s fantastic. It really works well with the neighborhood, and the landscaping is gorgeous,” he declares, adding that he and his children now ride their bikes over the back-lawn paths every day on their way to Edmunds Elementary School. Beck finds the “Shinto-style curved roof” in back merely “OK,” but he says of the historical renovations, “It’s unbelievable the amount of work they put into that.”

For good reason, according to Jean Carroon, the project’s lead architect and the principal preservation architect at Goody Clancy in Boston. “The house is like a little time capsule. I completely fell in love with it,” Carroon enthuses. She points out that the home experienced by visitors today is not quite the small, Italianate-style cube built in 1859 for Edward Phelps, a lawyer who held two U.S. president-appointed posts. (Reproduced in the info packet is an extraordinary photograph documenting the original pre-Civil War house, complete with the same iron fence it has today.)

Much of the house as it now stands, Carroon guesses, probably dates from the 1890s or from renovations — including the roofline, most of the square footage and some elaborately parqueted floors — made by the house’s second owners, John and Nellie Flynn, who lived there from 1913 to 1940. The front landscaping was influenced by Nellie Flynn, a leading botanist in her day whose collection of 22,700 plant and flower varieties is held at UVM.

“There’s no ‘original’ in buildings that have been lived in for 150 years,” quips the 58-year-old architect. Nevertheless, Carroon and her crew, along with Engelberth Construction of Burlington and a host of local subcontractors, were careful not to “restore” anything for which there was no historical evidence.

With the help of Mary O’Neil, a preservation specialist in Burlington’s planning and zoning office whom Carroon describes as “just wonderful,” Carroon was able to access key documents. Some old insurance maps, for example, showed the footprint of a porch on the south front, which Goody Clancy then rebuilt. And “the house clearly had a cupola,” Carroon says, “but we never found a picture of that, so we decided not to build one.”

Ron Wanamaker of Wanamaker Restoration in Burlington led the restoration team along with his wife, Amy Mentes. He says the house was actually in pretty good shape when work started in May 2009. It had had only four owners in 150 years; the last family, the Cannons, sold it to the college in 2004. The biggest challenge, Wanamaker says, was restoring the windows to LEED specifications. (The building is slated to receive a LEED — Leadership in Energy and Environmental Design — platinum rating for its green design.) Not only did the team return the windows to working order and build storm windows for each one, but “we had to have them snug enough to pass the blower door test,” says Wanamaker. “It was nerve wracking.”

“If I could clone Ron and his team and take them to every project, I would,” Carroon says appreciatively. That would include quite a roster of projects: The architect has led the restoration and greening of nearly a dozen national historic landmarks, including the architecturally iconic Trinity Church in Boston’s Back Bay. For her sustainability-enhanced preservation work, Carroon was named a Fellow of the American Institute of Architects — a group of about 2000 highly regarded architects, out of a registered 60,000 or so in the country, who can put “FAIA” after their names.

As you look closer, Perry Hall’s environmentally sensitive measures seem to multiply: All lights are either motion- or ambient-light sensitive; every office has natural light; south-facing offices and balconies will be partly shaded in summer by “green shields,” three-story trellises that will eventually be covered in vines; much of the flooring outside the original house is cork; outdoor walkways have pervious surfaces; the south wing’s curved roof is planted with a green roof; and the back lawn is terraced so that the lower level manages stormwater runoff through a wetland garden. As if to remind people of the importance of the environment in human enterprise, a 6-and-a-half-foot sundial by sculptor Kate Pond and Bill Gottesman of Precision Sundials, both Burlington residents, sits at the wetland garden’s edge.

And, most significant, the building has no furnace or boiler. All heating and cooling are accomplished through a geothermal well system. As Mark Tighe and Steve Knight of Engelberth describe it, the construction team drilled two wells beside the building down 565 and 725 feet to a large aquifer that sits below lake level. Pumps draw the water — which remains at 52 degrees all year — through a closed-pipe loop past a heat exchanger, where its temperature is transferred to water in another closed-pipe loop running through the building. (The closed loops prevent adulteration of the aquifer.) Thirty-five strategically located coil-and-fan units, or heat pumps, blow the moderate-temperature air into the building. On the coldest days, electric heat will provide a boost.

“The building will have very, very low energy use,” declares Carroon, who used geothermal wells in several previous projects, including Trinity Church and three Harvard University buildings. According to Christina Erickson, the college’s sustainability coordinator, software development students are currently designing an interactive “dashboard” for the building that will display energy-usage measurements in real time.

Perry Hall’s impending LEED platinum designation reflects only part of its sustainable design. Like most preservation architects, Carroon finds the U.S. Green Building Council’s rating system weighted toward new construction and less rewarding of building reuse than are other rating systems — even though, as Erickson puts it, “Building more is not better if we’re really talking about our greenhouse-gas emissions.”

“[LEED] is still very much consumption based, and consumption is the problem that got us here in the first place,” Carroon says. The system also doesn’t reward durability — “thinking through the service life of a building,” as she puts it — though that was one of her main concerns with Perry Hall. By using exterior steel supports, including two X-shaped lateral braces designed in collaboration with Burlington-based Engineering Ventures, Carroon eliminated the need for interior columns, allowing the building’s spaces to be reconfigured for different purposes 50 or 100 years from now.

Carroon also considered all-wood construction, but balked when she learned the wood would be coming from Vancouver instead of Vermont. And she looked into both solar and wind power. A wind turbine would have had to be too tall — and therefore too expensive — to be worthwhile, and solar panels are still, in her opinion, “not terribly affordable or effective.” But both options can be added as they become more sophisticated, she says.

All of this came at a price, of course: The building itself cost $12 million, and that doesn’t include the landscaping and barn and cottage renovations. Mease says the college took out a $12 million tax-exempt bond, and another $3 million came from its ongoing capital campaign, called “Vision. Innovation. Passion.”

Carroon can’t credit Champlain enough for that vision. “It’s unusual to find a client who is as visionary as Champlain,” she says more than once. And, while city residents who live near the college tend to view its expansion with a wary eye, they generally appreciate the institution’s commitment to historically respectful renovations.

If it’s true, as Carroon claims, that “the stats on visiting students are that they decide within the first 15 minutes — I call it karmic shopping,” then Champlain’s millions may prove to be money well spent.