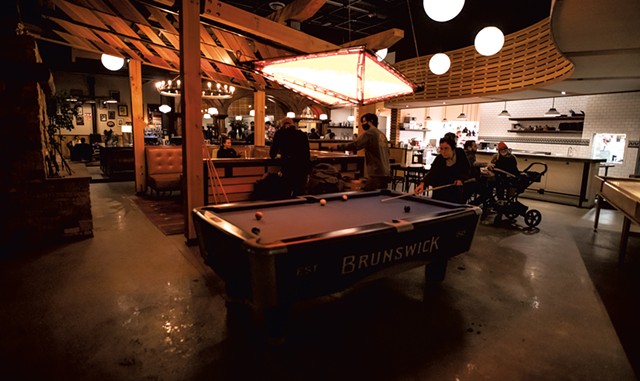 The new sign represents a shift that the owners of the two neighboring businesses had been considering since before COVID-19, but the pandemic provided the impetus they needed.

Under co-owner and chef Frank Pace, the Great Northern has always provided food to the taproom of Zero Gravity, a brewery under joint ownership with production facilities on Pine Street and in South Burlington. Before mid-March 2020, the taproom and restaurant had distinct menus and ambiences — the former offering counter service; the latter, table service and finer dining.

"This is the positive result of a crappy situation." Jeff Baumann tweet this

The two menus were edging closer together, however, and when the pandemic hit, the brewery and restaurant began using a single menu and ordering system. One set of outdoor tables spanned the wide front patio in front of two separate entryways.

Right before Christmas, Zero Gravity and the Great Northern made their collaborative pandemic survival approach permanent, replacing the taproom and restaurant with Zero Gravity Beer Hall. The new jointly run destination has taken over the entire interior space previously occupied by the two businesses.

The brewery and food operation continue to exist as separate business entities. What patrons see, however, is a new beer hall with Zero Gravity brews and a casual, creative food menu from the Great Northern kitchen team.

The counter-service menu is exactly the same, whether you order at the former taproom bar or at the grand antique bar on the restaurant side of the building. The only structural change to the building was the removal of part of the wall that previously divided the two venues; now patrons can flow easily from one side of the beer hall to the other.

"This is a positive result of a crappy situation," said Jeff Baumann, the beer hall's general manager. "COVID forced us to think like this, to work together more. This model works better. It's a win-win."

Pre-pandemic, Baumann explained, the taproom was often packed on nights when the restaurant had relatively few diners. The new approach makes better use of the physical space and responds to the local demand for all things beer and for more casual dining.

"We almost made this decision before the pandemic," Pace said. "This is awesome."

After ordering at either bar, people can choose from various forms of seating to which runners will deliver their food: dirty fries loaded with crisp nuggets of smoked pork or seitan with sweet chile aioli and housemade pickles ($16); or the juicy, special sauce-slathered local beef burger ($16 with fries or greens) that evokes taste memories of McDonald's in all the best ways.

On a warmish recent evening, the outdoor tables were busy. Plenty of diners also stayed indoors, though, sprinkling themselves among all the different rooms and nooks. Others had grabbed beers and were playing shuffleboard and pool in the new game area in the front corner of the former restaurant space.

The abundant seating options range from high-top tables to couches to stools at the magnificent wood bar to cozy banquettes by a real fire. (The beer hall requires proof of vaccination only for those sitting at either bar, to protect staff working behind the bars close to patrons who have unmasked to eat or drink.)

The meticulously restored bar, which came all the way from Seattle and was once featured in a John Wayne movie, still draws me to the restaurant side of the beer hall. It also made a favorable impression on my 24-year-old son, who surveyed the lively scene on a recent visit and said, "I could see coming here with my friends. That bar is so cool."

The food and drink made a good impression, too. The beer hall menu delivers contemporary Vermont taproom fare with extra emphasis on local ingredients, bountiful fermented vegetables and housemade vegan options. Those include analogues to burgers and bratwurst, as well as sandwiches such as an inherently vegan eggplant bánh mì.

Pace said his menu mix is motivated by environmental concerns and customer demand. "We buy only local meat, and we're trying to serve less of it," he said. He sells as many Buffalo cauliflower "wings" as he does chicken wings.

It's also a fun challenge for the chef and his team to develop dishes "that are just good — and happen to be vegan," Pace said. "We have to evolve as chefs."

Fans of the original Great Northern restaurant may wistfully recall its beautifully plated dishes, such as sparkling fresh hamachi crudo with chile and soy, and its meltingly tender 40-hour braised beef. "Before, we sold lots of fish and oysters," Pace said. "Now, we're selling cauliflower and chicken."

Regulars may also miss the days of table service and expert bartenders shaking up creative cocktails. On the liquor side, for now, the beer hall continues the pandemic practice of offering cocktails premixed and bottled ($10 to $14). The interesting, well-made choices include a Fernet sour and a Negroni made with lightly bitter Punt e Mes vermouth.

The beer list, naturally, is strong. I'm a fan of the burnt-toasty Zero Gravity Ron Burgundy Scotch ale ($6), named for the bloviating protagonist of the Anchorman movies.

On the food side, the beer hall's dishes may be less complex than the Great Northern originals, but they're still distinguished by Pace's attention to detail and local sourcing. "You get the same kind of execution, just coming out on a tray," he said, referring to the small, stainless-steel baking sheets on which food is served.

Standout dishes from our takeout order and dine-in meal included an excellent chopped kale salad ($13) with crunchy broccoli, crispy fried shallots, chewy dried cranberries, pickled green beans and a bright, lemony dressing. A hefty, griddled tuna melt ($16) was unlike any your mom ever made — with fresh, line-caught fish, Vermont cheese and full-sour pickles.

We squabbled over who got to finish the steak sandwich ($18): dry-aged beef cradled in a toasted sesame hoagie roll with plenty of leeks and peppers, a velvety cheese sauce, and a bone broth dipping jus.

With multilayered flavors and textures, the vegan bánh mì ($15) was as compelling as any of the meaty options, with roasted eggplant, seasoned tofu spread and crunchy fresh vegetables.

We also dug happily into the rice bowl with nuggets of crispy tofu ($17 with that protein choice) and loads of gingery pickled vegetables, though it was a little heavy on the rice. I'd choose that or the bánh mì over the housemade mushroom-and-koji "bratwurst" ($12) or the vegan burger patty ($16); both delivered plenty of umami but fell short on tooth-resistant meaty texture.

A bowl of "damn good" chowder ($14) lived up to its name, thanks to a rich broth, chunks of caramelized smashed potato, bacon and clams. Fair warning: Do not expect a traditional white New England chowder foregrounding clams and dairy; this brothy soup has a meatier flavor.

If shellfish are your passion, the Great Northern's raw bar will still make weekend appearances. And, not to fear, the beer hall continues to offer coffee and waffles daily from 8 a.m. to 2 p.m. The full food menu fires up at noon.

"We want to be a great brewery with great food," Baumann said of the new beer hall. I'd say the eagle — um, the hummingbird — has landed.

The original print version of this article was headlined "Good Neighbors"