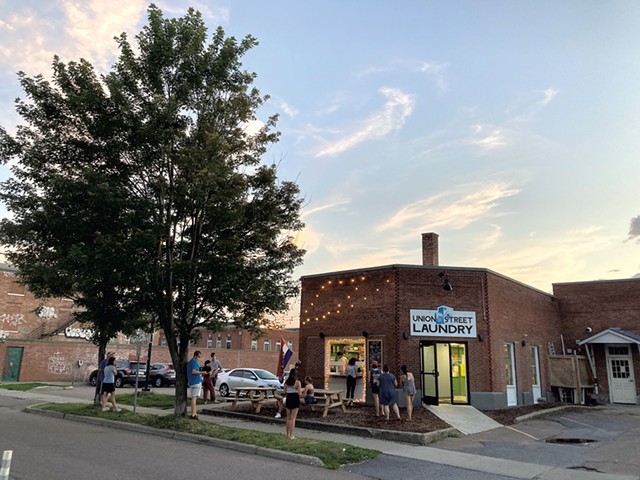 Burritos were always in the plan for Burlington's Taco Gordo, according to owner Charlie Sizemore. The sign above the eatery on North Winooski Avenue, which currently reads, "tacos cocktails beer," originally included "burritos." But when Sizemore and staff set up their kitchen, they couldn't figure out how to fit burrito prep into their daily operations.

The coronavirus and the subsequent temporary shutdown of in-person dining turned out to be the impetus he needed. Taco Gordo now offers burritos for takeout both on North Winooski and at its new Little Gordo Creemee Stand at 71 South Union Street.

"They travel better than tacos," Sizemore said of the Gordo burritos. Plus, he saw the new option as "a way of offering a silver lining" during the early days of the pandemic.

The appeal of the burrito has always been its portability. A 20th-century invention, according to the Encyclopedia of Latino Culture: From Calaveras to Quinceañaras, it's the subject of stories that place its origin in various states of northern Mexico, where wandering vaqueros may have dreamed it up. The flour tortilla acts as a long-lasting barrier between the ooze of rice and beans and the inside of a saddlebag — or backpack.

I asked Sizemore about his criteria for a quality burrito.

"Personally, I want it to be big flavors," he said. "I want it to be wet. I also want there to be a crunch. Our meats are perfectly suited for this."

Burrito eating, when you have time for full engagement with it, is an art. tweet this

While I've likely eaten my body weight in Taco Gordo tacos (and pickled onions), I spent the better part of last year at the Seven Days office bemoaning that downtown Burlington was essentially a burrito desert. (Bueno Y Sano, which still serves up burritos in South Burlington, closed its College Street location in early 2019.) So I went to Little Gordo eager to taste what I'd been missing.

I tried two versions of the Gordo burrito: the standard bean-and-rice combo and one with brisket. The former will set you back just $8; the latter, $11. Other add-on options include chicken, queso and guacamole, and the stand also sells nachos.

The first thing I noticed about the burritos was their heft. On my kitchen scale at home, each one came in at about 15 ounces, very nearly a pound.

I would put this in the middleweight division, which is a good thing. As humanity's burrito-making capacity has grown, so has our hubris, resulting in behemoth creations reminiscent of fattened domestic turkeys that can no longer support the weight of their own breasts. By contrast, the Little Gordo burrito fills you up, but if you go swimming after eating it (not recommended), it won't drag you down to the lake bed and anchor you there by your belly.

Like Sizemore, I'm all about a burrito with texture. Gordo's burritos combine soft rice with sauce to sop it up; fat, tender brown beans; and the satisfying crunch of cabbage. Burrito eating, when you have time for full engagement with it, is an art; for the true experience, every bite must contain every ingredient, and that was the case here.

The flavor was, unsurprisingly, fantastic. The classic Gordo roja sauce lent heat and tang. It's enough to make the plain bean burrito interesting, but if you're an omnivore, I recommend springing for a meat add-on, which adds pizzazz and even more juice.

Currently, the Gordo burrito's magic comes wrapped in a Maria and Ricardo's flour tortilla, but Sizemore said he's looking to upgrade. He's been working to develop a burrito wrap with his corn tortilla supplier, Burlington's All Souls Tortilleria, and expects that to be available in coming weeks.

While the burritos at Little Gordo offer savory heft, the ice cream brings out the summer crowds. As my boyfriend and I biked through the neighborhood just east of the stand a couple of days later, coming for dessert, we saw college-age Burlingtonians enjoying the mild evening weather on nearly every stoop.

A similar crowd, plus masks, gathered around Little Gordo, which was decked out in twinkle lights and blasting dance music. Sizemore said the Little Gordo managers have put time and energy into cultivating a fun vibe at the stand, and I felt it.

You can get Little Gordo's homemade ice cream base in a cone, in a Wizard — modeled after a Dairy Queen Blizzard — or even sandwiched between cookies. The maple-coffee creemee arrived tall and fat like a set of kids' stacking rings, while the Peanut Butter Baby Wizard had vanilla ice cream, peanut brittle and crushed Reese's Pieces swirled into an orange-tinted blend. Both were rich and delicious, and the smooth coffee flavor was a particular highlight.

Little Gordo currently serves customers in the late afternoon and evening, but I'm putting intentions out into the universe that by the time I return to the Seven Days office — whenever that might be — the stand will be open for lunch. In the meantime, the burritos are exactly what Sizemore promised: a silver lining.