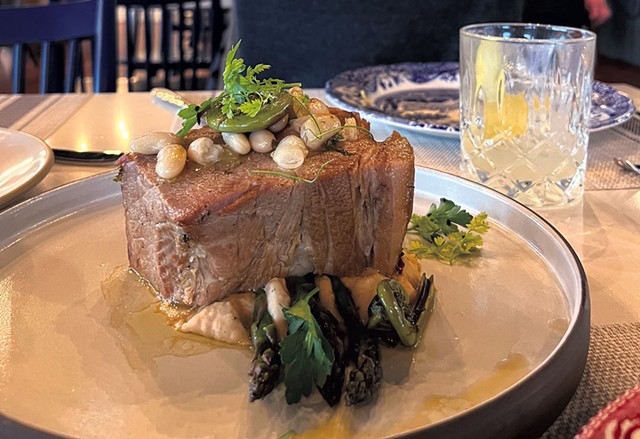 The first big, juicy tomato of the summer is the headliner of Vermont's local produce season. But for me, the real delights are the opening acts — the rhubarb, radishes, asparagus, peas and spring greens filling our plates right now. They get the party started after a long winter, before the more brazen summer vegetables steal the spotlight.

When I sat down at bramble, the newest restaurant in the Essex Experience, those early arrivals jumped out at me from all over the menu: spring pea and ricotta pizza; a salad of early lettuces; roasted radishes; pickled rhubarb; and asparagus and fiddleheads served under an impressive slab of slow-roasted Vermont pork shoulder.

Colleen Hunt and Shawn Hyer moved back to Vermont to open bramble after years of cooking at, working at and developing restaurants all over the country — most recently in Napa, Calif. The 90-seat spot is the first restaurant they've called their own. It opened quietly in the former Orvis outlet on April 14, replacing displays of fly-fishing gear with a custom-built wood-fired oven, farmhouse tables and pantry-style shelves that are quickly filling with jars of preserved produce from local farms.

Hunt's ever-changing menu is what the couple calls "micro-seasonal," with ingredients, accoutrements and whole dishes dictated by what's available each week or day — and, in the future, by what the pair can put up and store in the restaurant's extensive larder. 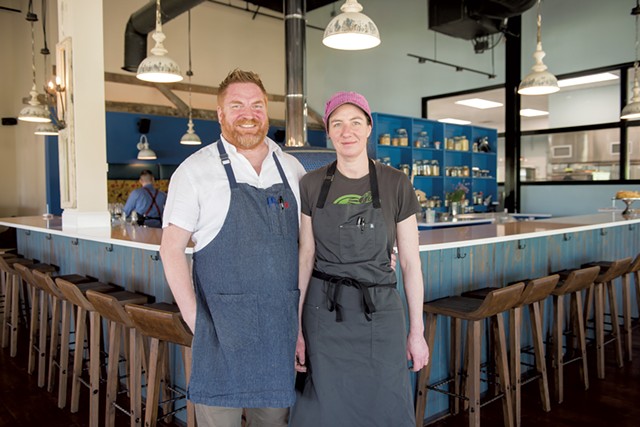 From the start, bramble has worked closely with a lengthy list of local producers, such as Dandelion Farm, a vegetable and fruit operation that Amanda Adams and Mike Bickley operate on just under two acres of Adams Turkey Farm in Westford.

Shortly after bramble opened, Adams and Bickley were set to bring 10 pounds of ramps from their sugar bush to the restaurant.

"We woke up in the morning, and there were five inches of snow on the ground," Hyer recalled. "We were like, 'Oh no! We're not going to see our ramps today.' We were so psyched" about having them, she said. But two hours later, Bickley arrived with the ramps.

"You don't get that elsewhere," Hyer said, referring to both the spring dumping and the direct relationship they've created with the farm. "We're here because of the small producers and the seasonality of the food," he added.

They're also here because they want to be close to family. Hyer, who helms the front of the house, tells customers that the restaurant's name is an homage to the deep-rooted, sometimes invasive nature of a backyard bramblebush. "They're very difficult to get rid of," he said. "Our roots in Vermont run super deep, too, and we were always coming home." 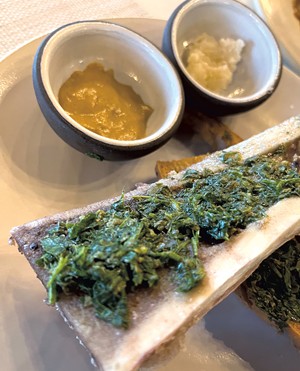 More specifically, the name nods to a bramble patch on the far side of the 25-acre Cooper Hill Inn property in East Dover, where Hunt grew up. Early in the now-married couple's relationship, Hunt and Hyer were visiting for a family event. All of the bedrooms were taken, so they pitched a tent in a clearing in the center of the massive bramble patch.

The inn is also where Hunt first learned to garden, forage and cook, along with her siblings. Her mother, Marilyn, "did all of the cooking for the guests — until we were old enough," Hunt said.

Some of the family's go-to recipes are now on the bramble menu, including Marilyn's rhubarb and buttermilk cake, which Hunt dresses up for dessert with strawberry compote, crème fraîche and a sprinkle of hibiscus powder.

Despite being a former outlet store, bramble captures an inn-like feel. Each table has coordinated yet mismatched plates; the space is filled with high-backed wooden chairs, antique furniture — including bureaus, sewing tables and buffets — and paintings on loan from neighboring ArtHound Gallery. The top portions of the walls sport well-worn wood left over from the reassemblage of the historic barn that is now a stage on the Essex Experience green, visible just past the site of bramble's future outdoor patio.

The effect is relaxed and homey, which is exactly what Hunt and Hyer were going for. "We wanted it to feel like we're inviting somebody into our home to share and eat Colleen's food," Hyer said. "Just with a much bigger kitchen."

There's even a cozy fire — though it isn't just for ambience, cranking out a large portion of the restaurant's food. 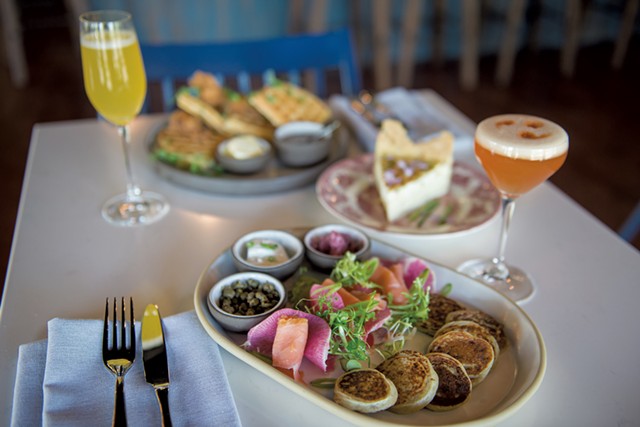 Wood-fired pizza is having a moment in Vermont. While those pies have been a staple for years, bramble is at least the third new spot to open since November that anchors its menu — and its space — around an impressive hearth. It's not a surprising trend, since pizza is a crowd-pleaser that's easily adaptable to takeout, a solid business decision in pandemic times.

On the night I visited, bramble offered seven pizza options priced between $16 and $18. The pies that floated past our table were perfectly blistered and loaded with toppings — some classic, like the Knickerbocker's Italian pepperoni, and some less expected, such as the Iberian Ruler, with a combo of boquerones (white anchovies), roasted red peppers, fresh garlic, parsley, and Mahón and manchego cheeses.

"We want people to know they can bring their kids, and it can be warm and familiar," Hyer said. "But at the same time, we didn't want to compromise on the type of food and flavors we wanted to get out there."

The objective, he added, "is to get people to trust us."

Besides the pizzas, the menu offers plenty of family-style snacks, salads, entrées and sides that are ideally sized and priced for diners looking to try something new. So many, in fact, that my dining companion and I decided to skip the pizza altogether.

We started with a round of Fiddler's Cove oysters ($16 for six), which were immaculately cleaned and served with tobiko and housemade horseradish. I was tempted to keep the fish-egg thing going with an order of Tsar Nicoulai caviar ($35), but we opted to save that — and its accompanying blini — for a return trip for Sunday lunch. 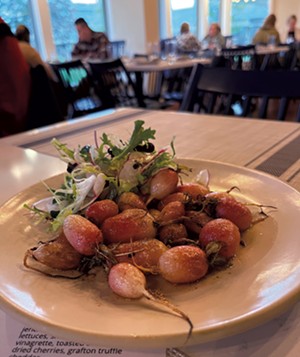 The roasted spring radishes ($10) were a standout, hot out of the wood fire with brown butter, honey, chile flakes and thinly shaved raw radish. The radish tops found their way into braised greens served with a roasted New York strip steak.

"A chef around here showed me a cool technique for roasting radishes a long time ago," Hunt said. "We threw these in the oven, tasted them and tried to figure out which supplemental flavors go best."

We also snacked on the citrusy, lightly spicy country-pickled shrimp ($10), which came in a small blue mason jar. The plump, briny shrimp were a nice sign of pickled things to come as the team fills the larder. So was the pickled rhubarb in the baby spinach and beet salad ($12).

Next, we explored the "hearty from the hearth" and "from the fire" sections of the menu, ordering a wood-fired medley of mushrooms with smoked-onion miso ($16); slow-roasted Vermont pork shoulder ($28) with creamy white beans; and whole roasted beef marrow bones ($14) with herb salad, capers, grilled bread, horseradish and housemade mustard.

The rich fat of the bone marrow was cut perfectly by the herby and bright elements served alongside the long, stuffed bone, and the bread was just right for swiping through the mixture to capture any bits I'd missed. The no-fuss plating — and the encouragement from our outstanding server, Mishka Lord — had us diving right into what can seem like an intimidating dish.

As we slowed down and sipped on our well-made, classic cocktails, we eavesdropped on snippets of conversation about the oven-warmed olives and goings-on about town. Bramble is remarkably well soundproofed for a big restaurant, but many of the diners surrounding us seemed to happen to know one another, in classic Vermont fashion.

Hunt witnessed similar mingling on a recent Sunday, she said, when an entire corner of the bar was filled with unrelated kids eating pizza. With a little trust and culinary adventurousness, maybe someday they'll be in the same spot slurping up bone marrow.