First Bite: Sampling All the Fare at Taco Gordo

Taco Gordo stands at a key juncture in Burlington's Old North End: where North Union Street angles into North Winooski Avenue. Two neighborhoods merge here — a residential one that is among the most diverse in the city, and a commercial zone also notable for its diversity. Nearby are a yoga studio and nonprofit theater, a senior center and a junk shop, a vegan bakery, a Vietnamese restaurant, a pizza place, a Moroccan café, a bistro that serves new American cuisine, and more.

Taco Gordo, a taqueria and tequila bar, took its place at this crossroads in early December in the renovated former quarters of the Burlington Beverage Center. In its short time on the block, Taco Gordo has established itself as both a natural fit and a happening new thing. The menu is concise, the food is flavorful, the prices are low and the place invites patrons to hang.

"I always thought that a real pared-down taqueria would do well in this town," owner Charlie Sizemore said. "The idea is that, walking in here, you get the same experience as you get walking into a taqueria in San Francisco or Los Angeles."

One evening last week, my friend and I found seats at the long wooden bar that bisects the room. Our backs were to the front door, where a blast of winter hit us each time a person walked in or out — and enter they did. We faced the lineup of liquor bottles, mostly tequila and mezcal, whose contents form the cocktail list. A house margarita ($8) was served quickly; its sweet-salty tang took our chill away from the inside out.

Our food order was one I've dreamed of making at a restaurant: one of everything. This comprised a meal for two that we plowed through: chips and salsa with guacamole ($5), five varieties of tacos ($2 to $5), jicama salad ($3), a side of avocado ($2). Pork and chicken tamales ($3) were on special that night, and we opted for those instead of a side of rice or beans ($1). 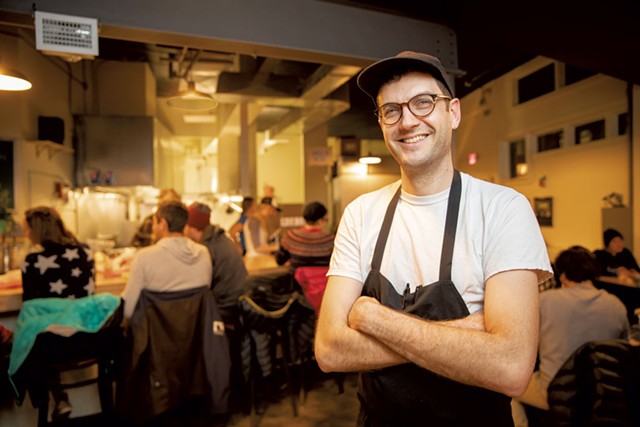 Just a few chips into our guac starter — a mash of avocado seasoned with salt and lime — our tacos arrived. Served on a grilled corn tortilla made in the adjoining space by All Souls Tortilleria, the tacos were popping with flavor, topped with chopped onion and cilantro. The bean taco was my favorite, but others were just as satisfying, including carnitas and dry-rubbed brisket.

We moved from taco to taco, bite to bite, red salsa to green. I embellished the basics by adding a slice of avocado to the chicken or a splash of jicama juice to the brisket.

"I like everything about this place," my friend said.

Taco Gordo is the creation of Sizemore, a reluctant restaurateur who made the rounds at area restaurants, bartending and serving for more than a dozen years before opening his own place.

"I never wanted to own a restaurant," said Sizemore, who will turn 37 this week. "I see what it can do to people."

He's worked at restaurants that went out of business or were sold. Five years ago, he was laid off as bar manager at Nika, a short-lived Mediterranean restaurant on Church Street. Sizemore got a gig moving Coca-Cola coolers for a friend, Shane Corbett, who also had bartended at Nika. Driving around the state together, "two bartenders talking about Burlington" in their truck, they discussed launching a taco place.

But rather than open a restaurant, Sizemore and Corbett decided, in 2014, to start a taco cart on Church Street. They called it Taco Gordo. They added a second cart a year later that parked at ArtsRiot's Friday night Truck Stop and worked special events. 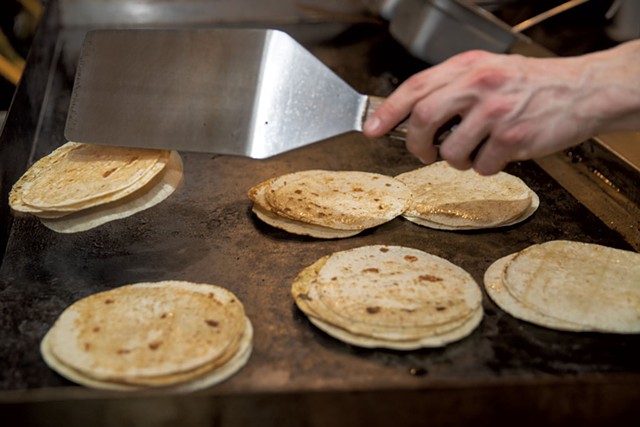 "We naively thought we would become so popular and make so much money that we could make it through the summer," taking winters off, Sizemore said. But a seasonal business proved untenable, and he spent the off-season working the restaurant beat again. Bartending at ArtsRiot, he saw the draw a neighborhood restaurant could have — and how people embraced it.

Last summer, he and Corbett sold the taco carts and Sizemore went on to open the current Taco Gordo.

"I have this love-hate relationship with restaurants," he said. "I love going out to eat. I love the magic that can happen dining out. But there's the other side of it, when you see the smoke and mirrors: [when] you're kind of being sold a false bill of goods, and everything is just kind of mediocre."

On those occasions, he'd leave the restaurant and think to himself, I could've just stayed home and had a sandwich, Sizemore said.

So when he created Taco Gordo, a taqueria in the neighborhood he calls home, Sizemore left out "all the unimportant shit that nobody cares about when they go into a restaurant," he said. "And all the stuff that's important, we keep."

That means "intentional food" that's cooked in-house, ordered at the counter and delivered within minutes in baskets lined with parchment paper. It means a serve-yourself table that holds a half dozen housemade salsas, sliced cabbage and radishes for garnish, and a bowl of lime pieces. And it means a six-drink cocktail list featuring tequila and mezcal.

The original print version of this article was headlined "Essential Eats"