First Bite: May Day Does Industry Night Right in Burlington’s ONE 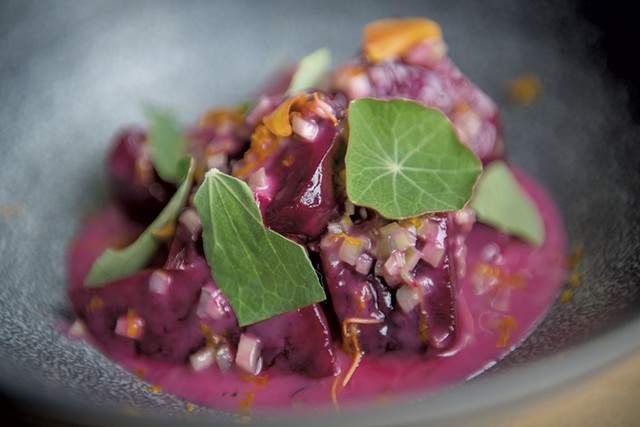 Monday is the trickiest night of the week to dine out. It's traditionally a day off for restaurants, whose employees start their weekends just as nine-to-five folks get hit with the Sunday scaries. These days, though, even places that were known for their seven-day schedules are sticking to shortened pandemic-era hours as they navigate staffing challenges.

There are no signs of distress at the Old North End spot, which opened over Memorial Day weekend in the former Butch + Babe's space at 258 North Winooski Avenue. In fact, co-owners Matthew Peterson and Mojo Hancy-Davis lean further into the name's other associations: a celebration of the start of summer and a time to honor workers.

"We want to be your favorite cook's favorite restaurant." Matthew Peterson tweet this

Peterson, 31, has an annual tradition of celebrating the ancient festival that falls on May 1 with a river plunge and bankside bacchanalian bash. As he and Hancy-Davis, 30, thought about the restaurant they wanted to create, that tradition came to mind.

"It's the seasonality and bounty of Vermont meets the energy of going to the river with your best friends," Peterson said. "It just kind of stuck."

May 1 is also International Workers' Day. Fittingly, since May Day opened, the busiest nights of its Friday-through-Monday dinner schedule have been the restaurant industry weekend: Sunday and Monday.

"Being open [those nights] for people in the industry is really important to us," Peterson said. "We want to take care of them on their days off."

"We want to be your favorite cook's favorite restaurant," Peterson added with a laugh.

General manager Peterson and chef Hancy-Davis are the right duo to pull that off. They met eight years ago while working at Misery Loves Co. in Winooski and have honed their skills at Burlington-area hot spots ever since.

They hope to build on Butch + Babe's legacy as a popular neighborhood gathering place. Being open on Sunday and Monday — when nearby staples such as Taco Gordo, Café Mamajuana and Pho Hong are closed — should go a long way toward that goal. 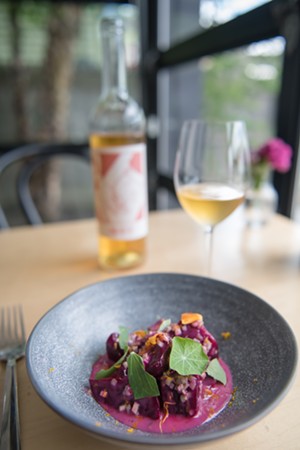 On a recent Monday night, I took my own advice and headed to May Day, where I met Wilder Wines owner Sipha Lam for what turned out to be a four-hour dinner. From the moment I walked in, the laid-back, welcoming service felt like getting an invite to a cool dinner party hosted by unpretentious yet wildly interesting friends of friends. We were ready to linger, and May Day was happy to let us.

It was Lam's day off, and she was sipping a chilled red at the bar when I arrived at 6 p.m. We moved to a table between the corner of the bar and the restaurant's massive garage doors. Influenced by the sun beaming in, we ordered a bottle of Subject to Change Wine's Chill Pill, a fun, skin-contact Californian chenin blanc that immediately set an easygoing mood.

Peterson's wine list is organized into "Open Right Now" offerings — available by the glass — and bottles that "Should Be Opened Right Now," half of which are under $50. May Day also serves a tight list of seasonal cocktails and a few beers and ciders on draft.

Wine in hand, we turned our attention to the food menu, where whimsical and sometimes delicate vegetable dishes sit side by side with a basket of French fries ($8) and a beefy, cheesy patty melt ($16). We ordered nearly everything.

Hancy-Davis credits his upbringing with teaching him the importance of connecting with his ingredients. He moved to Vershire, Vt., from Cleveland, Ohio, at age 12. His family went all in on homesteading: a dairy cow, chickens, meat birds, goats, bees, an orchard, even a pond stocked with trout.

They would give a pig a name, "but not as a pet," Hancy-Davis said. He recalled that when it was time to process the animal, a neighboring farmer would bring his tractor over, shoot the pig, and they would "spend the weekend butchering it." But, he added, "if the moment didn't feel right, the farmer wouldn't take the shot." 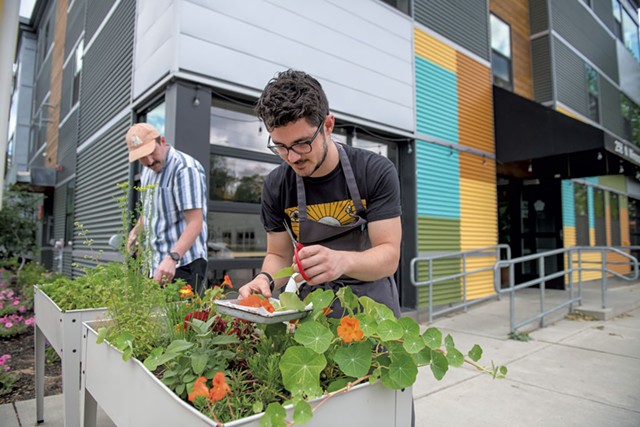 Today, the chef's desire to stay connected with his food sources translates into working with farmers — and doing quite a bit of DIY growing for the restaurant. May Day has inherited a 640-square-foot, double-wide garden plot at Starr Farm Gardens, which is currently half-full of plants Hancy-Davis started back in March, including tomatoes, peppers, squash and melons, along with perennials such as hyssop, oregano and yarrow.

Even the restaurant's front patio is blossoming, thanks to planters that Peterson's mother filled with herbs and edible flowers. Fiery orange and red nasturtiums spill over the planters' edges; during our meal, we watched as one of the cooks carefully plucked the plants' lily pad-like leaves.

Those nasturtium leaves were the "accidental muse" for May Day's roasted beet dish ($11), Hancy-Davis said. The floral, spicy leaves top a magenta mound of beets, the stems are diced along with rhubarb and the whole thing is doused in an electric pink sauce made with amazake, a sweet Japanese fermented rice drink. I was grateful when our server brought out spoons to help us slurp up the sauce.

May Day's vegetable dishes are both fertile ground for Hancy-Davis' experimentation and callbacks to his time at Misery Loves Co. "As far as technique goes, I was hugely influenced by Aaron Josinsky," Hancy-Davis said of Misery's chef and co-owner. "He's just absolutely masterful with vegetables."

I paused after my first bite of charred cucumbers ($16) — what was happening on the plate? Was it a pickle? I couldn't figure it out, but I went back for more.

"It seasons it with a kind of strange savoriness," he said, which he amplifies by rounding out the plate with a rye bread sauce.

Hancy-Davis' parents have been to May Day twice since it opened. Last week, his "very Italian" stepdad ordered the cucumber dish and said it reminded him of eel that he ate as a kid in his grandmother's kitchen.

"Having someone dear to me say, 'Wow, that reminds me of something from my childhood that's an entirely different food' — it makes me emotional," Hancy-Davis said. 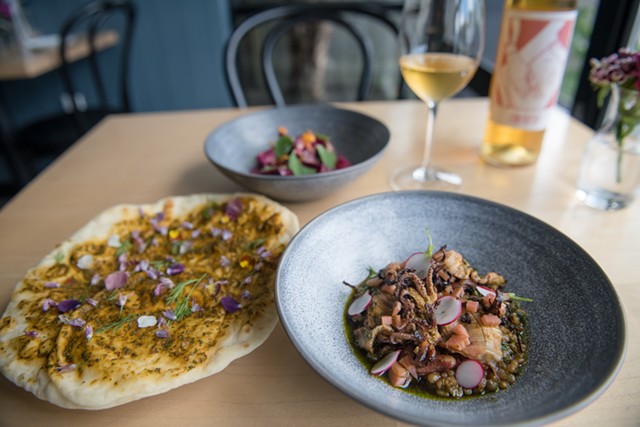 As fancy as some of the dishes appear, May Day's overall approach is playful. The squid a la plancha ($18) is served with housemade flatbread, and diners are encouraged to get their hands dirty, which I happily did.

"I love a dish that requires you to tear something, fill it up and eat with your hands," Peterson said. "It's food that requires engagement."

The hearty, multi-textured, interactive dish is the kind I'd come back to eat at the bar — a little squid snack — with a glass of whatever Peterson thinks I should be drinking, and lots of napkins.

Likewise, I dove in sans-utensil the instant Hancy-Davis dropped the grilled half chicken ($23) on our table — more than two hours into our languid meal. The crispy-skinned bird was topped with a pile of charred garlic scapes, kept whole and curled around like a nest. I picked up a scape and ate it like a Twizzler, revealing pops of cured red chiles, roughly torn mint leaves and chive blossoms hiding underneath.

By 9 p.m., I was ready to wrap up. But Lam wouldn't let me leave without dessert.

The rhubarb upside-down cake ($8) is another delicious case of Hancy-Davis connecting with his roots, but, this time, it's a reference to his early upbringing in Ohio. The whipped cream-topped cake is inspired by his grandma's pineapple upside-down cake, "with cherries in the holes of the sliced pineapple," he said — updated with the classic Vermont spring ingredient.

"I've worked with Mojo for years, and I had no idea he's a sleeper pastry chef," Peterson said. "His desserts are absolutely fucking incredible."

The cake was simple, nostalgic and delightful. We lingered over the hefty slice, inching closer to closing time and chatting with the staff as they prepared to start their weekend. Not bad for a Monday.

Patio and bar-area seating is available for walk-in diners; reservations for the dining room can be made via RESY.

The original print version of this article was headlined "Monday, Monday | Indulging on an industry night at May Day in Burlington's ONE"