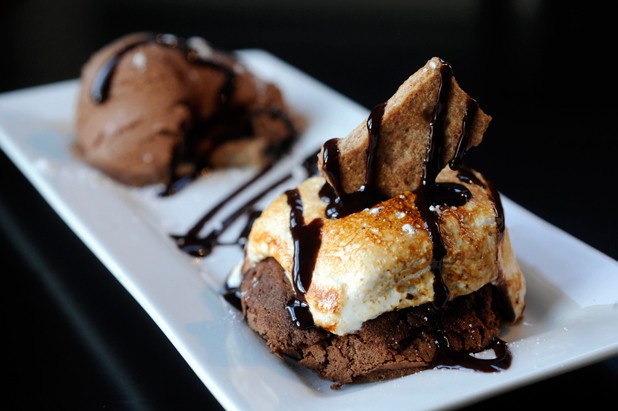 Morrisville is not exactly a culinary hotbed. Or rather, it wasn’t one. For almost a decade, the Bee’s Knees was the only dinner destination on most nonlocals’ radar.

Last summer, that began to change. New arrival Lost Nation Brewing started attracting distant drinkers, who came not only for the suds but for some of Vermont’s most creative pub grub. Then, in October, the town’s old train station, most recently home to Melben’s Restaurant, reopened as an upscale casual eatery. Co-owner Kim Kaufman calls 10 Railroad Street a “wayfarer’s tavern,” with fresh takes on comfort food for dinner and from-scratch sandwiches at lunch.

Owners Kaufman and Jim Goldsmith burst onto the Morrisville dining scene after a false start in Stowe less than a year before. Already the owners of the Blue Donkey, they plopped down $1.5 million to take ownership of their former Mountain Road neighbor, the Rusty Nail. The deal disintegrated after the previous owner turned out to owe the town $27,000 in back taxes; Stowe also had a lien on the property for unpaid sewer fees.

While controversy has been no stranger to the formerly New York City-based restaurateurs, they’ve given Morrisville a thoroughly comfortable restaurant experience. On a cold night last week, 10 Railroad Street was an oasis, even when the offerings weren’t entirely on track.

Our server, Whit, seemed genuinely excited to seat us. Once he learned we were from Burlington, he spent the meal chatting us up about Chittenden County restaurants.

The restaurant’s wide-open spaces are loosely decorated with a train theme, including artsy black-and-white photos of stations and cars hanging from the sage-green walls. In the hallway that leads to the bathrooms, new wood floors give way to a person-size track, down which I couldn’t resist chugging.

The menu likewise embraces the railroad motif, with appetizers labeled “Boarding Passes” and “the Dining Car,” and coffee drinks named for famous stations.

We ordered our tipple from the “Modern Platform” section. The Karamel Nutini looked like a sophisticated martini for a grown-up, but don’t let your kids near the thing. The combination of Stoli Salted Karamel and Frangelico would turn them into hopeless alcoholics before they reached double digits. Given that the drink reminded me of clear, liquid Nutella, it might have been a better choice for dessert.

Not that I had any major complaints about pairing the cocktail with the contents of the basket that emerged gratis just after we ordered. Lined with the comedy newsprint many restaurants use for fish and chips, it contained not bread but the Blue Donkey’s signature fried-to-order Donkey chips. The hot, ultra-thin chips were a well-seasoned surprise, but most of them suffered from a slight burnt taste.

When I interviewed Kaufman just before the opening of 10 Railroad, she described the restaurant as an opportunity for Blue Donkey chef Kermit Melendez to show off his more creative side, fostered in New York and Seattle fine-dining restaurants. The spinach salad was indeed a showcase for Melendez’s talents, as well as a refreshing palate cleanser after the chips.

The secret was tossing the greens with shaved fennel in lightly creamy orange vinaigrette. Though a winter dish at its core, the salad was like a white suit worn in the cold months — nontraditional and full of élan. I liked the addition of thinly sliced, house-cured salmon, but the dish would have been just as good without it.

Melendez clearly has a way with fruity dressings. The basic Railroad Salad was flavored with raspberry vinaigrette, neither too sweet nor too tangy.

I sampled that vinaigrette on a side salad accompanying the classic macaroni and cheese. I am more than ready for the mac-and-cheese-as-meal trend to be dead and buried. But since four different iterations (including one with lobster and tiger shrimp) occupy their own section of the 10 Railroad menu, I figured I had to try one.

Beyond the malaise I experience when I consume a dish with so little variety, my biggest problem with most macaroni-and-cheese offerings is that restaurants tend to serve them up too dry. Thankfully, that was not an issue at 10 Railroad. The skinny gemelli had plenty of creamy sauce, whose not-too-sharp character reminded me of a restaurant version of Kraft Macaroni & Cheese. That’s not a dig. With a shower of herbs and bread crumbs, the dish was a well-executed riff on many Americans’ equivalent of Proust’s madeleine.

Marcel would probably have shared my excitement at trying the next entrée. On 10 Railroad’s original menu, a rabbit cassoulet called to me. The protein had changed to duck by the time I arrived, but I can’t argue with the classics unless their execution leaves something to be desired. This one did.

The Académie Universelle du Cassoulet promotes many different takes on the basic French bean casserole, but I imagine the group’s members would faint upon biting into the undercooked (shall we say more than a little al dente?) white beans that formed the base of this dish. The braising liquid was heavy with garlic and definitely conjured the French countryside in its own way, but the stew needed more character. There were only two slices of sausage mixed in with the legumes. More of the same, or of other meats, would have helped.

But the duck leg that rested in the center of the gigantic bowl was the saddest part of all. Rather than being presented as a traditional confit, the gamy-tasting fowl was underseasoned and undercooked. As I got closer to the bone, it was nearly raw and exceedingly tough.

Bad cassoulet makes Alice an angry girl, but a good puree can cheer her up. The menu’s description of the butternut-squash mash that came alongside the grilled pork loin was my primary reason for ordering that entrée. I made the right choice.

The squash smelled strongly of fresh ginger even before the plate hit the table. In my mouth, vanilla bloomed along with the spicy root and the sweet squash. When I swallowed it, a gingery burn remained at the back of my throat. For Melendez, this was a risk that panned out admirably.

The rest of the dish was well made, too. A pair of grilled pork chops tasted of flame but remained juicy. Green beans were lemon kissed and cooked to crisp perfection.

In this case, my advice to the restaurateurs would be to offer less on the plate. The $19 entrée was composed of two piles of mash, each topped with a pork chop. When I had the second set for dinner the following night, the combination made a filling repast on its own. It would be nice to be able to order half the dish for half the price.

The same could be said of the cassoulet. After our dinner in Morrisville, my dining partner ate the dish again over the course of two lunches. At $21, that was a great value, but diners might appreciate the option of more reasonable portions at a lower cost.

The size issue was reversed with dessert. I don’t usually expect to pay $8 for a sweet unless it’s prepared by someone named Payard or Torres. All right, that’s an exaggeration, but I was still surprised at the price-to-size ratio of my deconstructed s’more.

I give big points to the chef for making every element of the dessert from scratch, but not all succeeded. The teensy chocolate cake on one side of the rectangular plate couldn’t seem to decide whether it wanted to be lava cake or simply a crisp-edged flourless one. I loved the brûléed marshmallow that capped it, but the homemade graham cracker on top of that was overly thick and hard to bite through. The plate’s greatest asset was a scoop of chocolate ice cream. Though it wasn’t as richly dark as I might have liked, the texture was delectably creamy, and thick zigzags of chocolate sauce added depth to the flavor.

Morrisville is a bit of a slog from Burlington, so I may not be heading back immediately, but 10 Railroad will be on my short list when I’m in the area. And for diners in Lamoille County who want to avoid the Stowe tourist traps, it will probably chug along into their regular rotation.

The original print version of this article was headlined "Chugging Along"