Side Dishes: An update on Burlington's Hen of the Wood 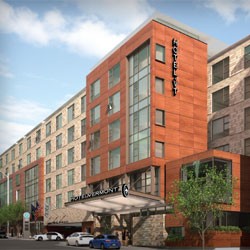 Spring 2013 isn’t as far away as it sounded when we first reported on the plans for Hen of the Wood at Hotel Vermont in September 2011. What was then proposed as an April debut is now projected for May 1, says chef and co-owner Eric Warnstedt.

What can diners expect at a Burlington sister to Warnstedt’s acclaimed Waterbury restaurant, Hen of the Wood at the Grist Mill? “Things that are primal and elemental — fire, flesh, fat — through a modern, professional and gracious lens,” Warnstedt says. “A well-thought-out beverage program that follows the same ethical guidelines as the food — wine is organic or biodynamic, coming from family farmers that take a less interventionist approach to their craft.” One of his friends, Warnstedt adds, owns a Portland, Ore., restaurant called Ned Ludd, an American Craft Kitchen — a name that sums up his ideal. “I wish I would have thought of that — it says it all.”

To create their own “craft kitchen,” Warnstedt and co-owner William McNeil have enlisted Jeremiah Church to construct a dome-style oven like the ones he helped make for Bread and Butter Farm in Shelburne and Vergennes Laundry as part of Turtlerock Masonry Heat of Vermont. They’ll also use a wood grill, and Warnstedt hopes that most foods coming out of the kitchen “will be touched by fire at some point.”

Many of those dishes will star meat, as the restaurant’s plan involves whole-animal butchery. The space design isn’t finalized yet, but Warnstedt would like to include a window into one of the coolers to reveal hanging carcasses.

Bar seating and stools set up by the open kitchen will add a casual vibe, appropriate to a menu that will include small and mid-price plates alongside higher-end fare similar to that served at the Waterbury restaurant. At the bar, guests can expect “a pretty rad cocktail program that falls in the same line as our food,” Warnstedt says. All in line with the urban Hen of the Wood, which, Warnstedt promises, will be the restaurant’s final expansion. He puts it in a nutshell: “It’s our style, it’s our ethics, in the city.”