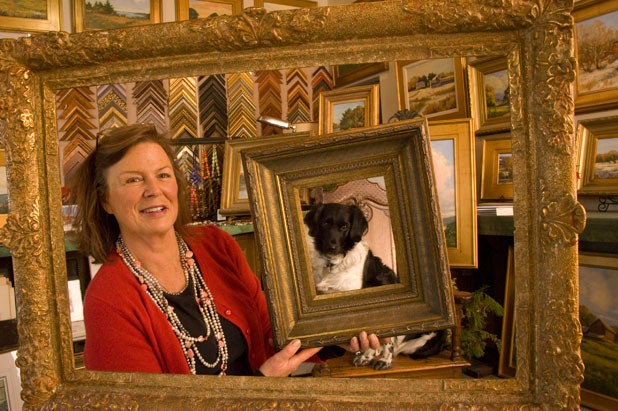 The saying is “Don’t judge a book by its cover,” not “Don’t judge a painting by its frame.” Perhaps that’s because most visitors to galleries and museums pay little attention to the wood or metal that surrounds a work of art, suggests Joan Furchgott, co-owner of the Furchgott Sourdiffe Gallery in Shelburne. “But when a picture has no frame or is badly framed,” she adds, “they may think there’s something not quite appealing about it.”

Janie Cohen, director of the Fleming Museum at the University of Vermont, believes that connoisseurs usually do notice frames. “Some people actually look at frames more than at the art itself,” she suggests.

Framing was, in fact, regarded as an integral aspect of the Western visual art tradition prior to the 20th century. In Renaissance Italy, for example, painters and patrons invested considerable amounts of money in lavish frames crafted by highly respected artisans.

In the modern era, however, some artists have made an aesthetic statement by dispensing with frames on the grounds that their work must be seen in its purest, or rawest, form. Frames, especially elaborate ones, came to be seen as unfashionable. At the same time, awareness of historical frames waned as Old Master paintings were routinely reframed each time they changed hands.

A reawakening of interest in framing can be traced in part to a revelatory show organized in 1990 by New York’s Metropolitan Museum of Art. The spectacle of rooms containing 80 or so empty Renaissance frames was startling. The Met looked as though it had been ransacked by an army of art thieves. But the show’s organizers succeeded in making visitors look at frames in a much more attentive way. The curatorial notion of “wall power” reentered public discussions of what’s on display in museums.

But balance does need to be maintained, Cohen cautions. “A frame can be enhancing or distorting,” she says. “It must not shout louder than the art itself.” Cohen cites the hypothetical case of a modern work of art that’s been given a gilded frame. “Some people might feel it adds gravity to the work, but it actually distorts the work,” she says.

Jennifer Koch, owner of Burlington’s Frames for You and Mona Lisa Too, agrees that “you can definitely go wrong with a frame.” A painting can suffer if its border is overly ornate or if it includes a color that’s not present in the work, she notes.

As an example of properly framed pieces, Koch points to a series of four woodblock prints hanging in the cozy, cluttered shop on Mill Street that also serves as her studio. “Black is the dominant color in the prints, so a simple black frame made the most sense,” she explains.

As the creator of those pieces, Koch speaks with special authority on the subject of their presentation. “As an artist myself, I know how important it is to show work in a professional manner,” she says. “Frames are the packaging. They’re vital to how you want your work to look.”

An artist’s sales can suffer if works are left unframed or, “even worse, are shabbily framed,” Furchgott says.

Fellow Shelburne gallerist and framer Marilene Luxton-Jones demonstrates that point by holding up an unframed antique print in her right hand and an identical print with intricate matting and a frame in her left. The difference is dramatic. The image of a pear cut open and left whole with leaves looks far more appealing in the treatment Luxton-Jones has given it.

The owner of a shop that bears her name, the Dutch immigrant has been designing and building frames ever since she arrived in Houston 30 years ago. Luxton-Jones had been collecting etchings but didn’t have the money to buy frames for all of them, so she apprenticed herself to a Texas frame maker. She soon landed a contract as a frame specialist for one of the largest interior-design firms in Houston, Luxton-Jones recounts.

She moved to Vermont 23 years ago because “it’s almost the exact opposite of Texas.” In addition to selling art and frames from her home directly across from the entrance to the Shelburne Museum, Luxton-Jones breeds the black-and-white Dutch hunting dogs called stabyhouns, one of which crowds onto her lap during a recent interview.

Almost any professional framer will say that decisions about how to enclose a work of art are based primarily on the work’s subject, style and coloring. Luxton-Jones, however, says she pays almost equal attention to the location where a framed piece will be displayed. She tries to visit a client’s home to assess its décor, particularly “what’s already hanging on the walls and what color they’re painted.”

Koch also collaborates with her customers, many of whom are local artists she has known for years. Lance Richbourg, for example, consults with Koch on frames for his popular paintings of baseball greats. Koch also counts serious collectors among her clients. Barre-based Mark Waskow, who owns a large collection of works by contemporary Vermont artists, is the source of one of the most unusual framing requests Koch has received. She crafted a frame for Waskow in the shape of an artist’s palette, complete with “big blobs of acrylic paint,” Koch recalls.

Framing is a labor-intensive undertaking, the local artisans point out. Luxton-Jones chops moldings herself, “despite my bad knees,” while Koch, who considers herself a carpenter, sometimes mills wood and regularly saws it into shapes before applying finishes. At Furchgott-Sourdiffe, where entire walls are filled with chevron-shaped frame samples, the owners also treat raw moldings that come from Vermont Hardwoods in Chester and other suppliers.

Furchgott and her husband, Brad Sourdiffe, specialize in restoration of historic frames. They’re currently working on a Renoir owned by a private collector. A few years ago, Sourdiffe built a new but historically accurate frame for a Manet that the Shelburne Museum was lending to another institution.

There’s no shortage of independently owned frame shops in northern Vermont. Koch says she knows of eight in and around Burlington alone. Creative Habitat on Shelburne Road ranks as perhaps the chief competitor for these locally owned operations, offering not only a wide selection of frames but also matting and mounting services carried out by what Furchgott describes as “a few pretty skillful workers.”

Despite what prospective customers may assume, however, Creative Habitat isn’t inexpensive, Luxton-Jones notes. “I can underprice [them], and I can do better work,” she asserts.

Artisan frame makers in Vermont and around the country also face a threat from Larson-Juhl, a Georgia-based subsidiary of Berkshire Hathaway that, Furchgott says, is “aggressively trying to take over the entire industry.” Some local frame shops sell Larson-Juhl products, but Furchgott won’t. “They really turn me off,” she says. “I just don’t like their whole attitude.”

But one thing all framers, independent or multinational, can agree on is that nearly every two-dimensional piece of art looks better with a proper border.