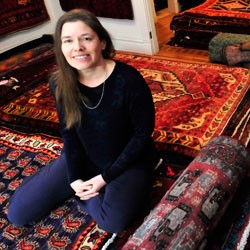 All Kirsten Edey wanted was to buy a rug for her son’s room. She didn’t particularly care about its color or size; she just wanted to be sure no human beings, especially children, had been exploited in its making.

The thing is, Edey, 50, is an anthropologist and a self-proclaimed “compulsive researcher.” What began as a bit of preparation for a quick purchase soon turned into a massive project — and, over the last year or so, into a business called Conscious Carpets that she runs from her home. These days Edey’s house in Montpelier is filled with hundreds of contemporary Iranian carpets, which she sells for unthinkably low prices.

But first you have to find them. On a recent visit, I see no exterior sign announcing Edey’s business. Unsure if I have the right house, I hesitate on the front steps until I notice a rolled, shrink-wrapped rug leaning against the door.

When Edey lets me in, the smell of wool rushes out. Dressed in a skirt and shawl of various purples, she leads me through stacks of carpets organized by size. It’s not easy getting around; the carpets are piled 3 feet high on the floor of each downstairs room and hang unfurled on the walls. At first glance, they all look the same: mostly red and black, with traditional Persian patterns. But it doesn’t take long for their individual characteristics to emerge.

And that’s exactly what Edey is going for.

“My goal is to get people in here — I’m hoping it’s kind of a museum experience,” she says. “They didn’t really know about rugs before, but then they leave with this whole sense of these women in another part of the world who are wonderful artists, doing what they want to do and making a living, even if not a great one.”

Before she got serious about starting a business, Edey says, she was simply interested in outreach. She wanted to draw attention to the often-harrowing factory conditions that pervade the rug industries in India, China, Pakistan and Nepal, which produce most of the carpets imported to the United States. Edey, who earned her PhD in cultural anthropology from Duke, was horrified by the reports of child labor and slavery. According to the U.S. Department of Labor, roughly 300,000 children are working — many as slaves — in the rug-making industry in India alone.

Statistics like that are what led Edey to import her wares from Iran, which is, after all, the birthplace of the Persian rug. It’s also an island of traditional practices in the industry.

Until 1987, when the embargo on Iranian products was imposed, the U.S. imported nearly all its rugs from Iran. After the embargo, factories in India and Nepal stepped up their production. Though the rug industry remained one of Iran’s largest, Edey says, without the American market to supply, it continued in many ways to operate the way it had for centuries. While some factories do produce the finer and more expensive “city rugs,” there remains a thriving community of women who weave more folk-art-style rugs at home and sell them to merchants, who in turn sell them at local markets.

These are the rugs Edey buys.

Since the U.S. relies almost exclusively on the rugs from Asian factories, Iranian weavers aren’t beholden to the tastes of the American consumer, Edey points out. The women work in their own homes, weaving by hand in traditional fashion but with plenty of modern influence. For example, one of the rugs currently stacked on Edey’s floor has a typical landscape design, but woven into the sky above the mountains is a fleet of helicopters.

“To me, that’s the selling point,” she says. “I don’t want somebody sitting in her house knowing she has to weave 600 beige rugs in a particular style. I want her to be, ‘Oh, I want to get pregnant, so I’m going to weave this rug.’” Edey peels back a few layers on one of the piles to reveal a carpet covered in neat rows of a vaguely uterus-shaped design.

“It’s a fertility symbol. It’s a sprouting seed and a particular type of fruit, and it’s a uterus,” she explains. “It’s the origin of the paisley design. It’s not going to be easy for me to sell this rug, because it looks like Pac-Man.”

Edey pulls out another one. It’s gorgeous, with an intricate, finely woven black and red pattern.

“This rug would be worth multi thousands of dollars, except for the fact that it’s worth almost nothing … because it has a huge repair in it,” she says. “You can find [the defect] very easily, but to me it doesn’t mean anything.”

I can’t find it, so Edey points out the seam near one end, which marks the portion of carpet that was chopped off — after a burn or a bad spill — and replaced.

In an ideal world, Edey says, she would be traveling to Iran herself — she’s never been — to purchase her rugs directly from the weavers. But the industry’s decentralized structure makes it difficult to follow any particular rug from start to finish. After a woman weaves the rug, an itinerant merchant will buy it from her and take it to a bazaar where it is trimmed, washed and sold. So Edey buys from just three exporters she trusts, browsing through thousands of their online listings to order 10 to 15 at a time.

Exactly how much do these weavers earn? Edey admits she isn’t sure.

“I don’t know what this individual woman’s life is like,” she says. “She may have a horrible husband who is pushing her to weave. But as far as I can tell, she is a free agent who’s weaving in her home and is respected in her community, and she gets what’s considered a good income in her village. It’s not ‘fair trade,’ and I wish it could be. I wish I could know the people I’m buying from, but I know the culture of people I’m buying from: There’s no employer; there’s no overseeing system,” Edey continues. “So anyone who didn’t want to do it would stop. This is my way of trying to offer an alternative to what I think is a really horrific system.”

Edey’s prices range from $25 for the rugs piled in the back room — which she wants to get rid of — to $1500 for the finer, grander ones she stores in her capacious attic. And she doesn’t base her markup on what she initially paid for the rug.

“I’ve bought some expensive rugs, and they’ve ended up going right into that pile,” she says, gesturing to the super-sale stack in the back. By contrast, some of the rugs she’s bought for dirt cheap are so beautiful that she marks them way up. “I sell them based on if I can barely stand to part with them. Then I put them higher because, if I get to keep them, great,” she says with a grin.

Edey also takes into account size and color. A blue or brown rug, for example, can command a somewhat higher price, she says, simply because it’s not red. And an unconventional 13-by-5-foot rug might go for less than a much smaller one with more practical — by Western standards — dimensions.

So far, Edey’s marketing strategy is word of mouth, though lately she’s been attending home shows and donating rugs to local fundraisers in an effort to attract new business. She says she’d like to keep it small scale. She has only so much space left in her house, and she’s busy being a single parent to her 8-year-old son.

But Edey seems to enjoy one-on-one customer service — especially because it gives her a chance to teach others what she’s learned. “People come in looking for a rug — it has to be this size and it has to match this pillow — and after a while they’ve spent hours in here and they have to look at every single rug, because they’ve become more discerning,” she says, sitting on top of a carpet as if ready to fly away. “I feel like I’m planting a little seed.”

Conscious Carpets in Montpelier is open most days by appointment. Call 249-2194 or 223-5534. info@consciouscarpets.com.