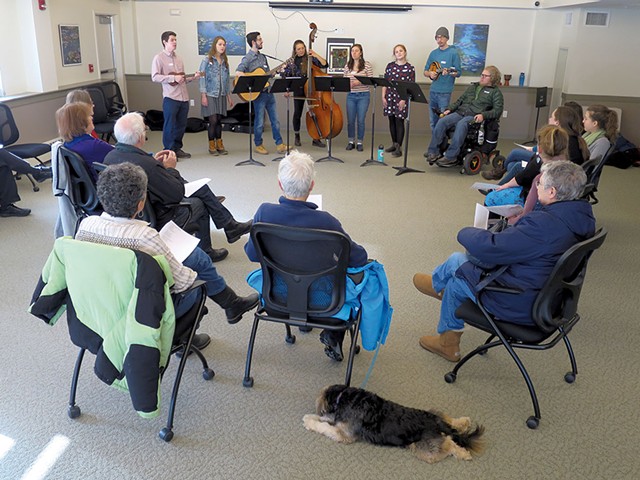 Ten years ago, when her partner was diagnosed with Alzheimer's disease, Lynn Vera felt relieved. "It explained things," she said. "Our relationship was struggling with anger because she kept forgetting things."

Since then, Vera has watched her partner, Pamela Gale, now almost 69, lose her independence and her pleasure in her favorite activities. "She was quite an athlete," said Vera, a retired school counselor. "Now she can't even watch sports, because she can't follow what's going on."

Listening to music and watching live performances are among the few things Gale continues to enjoy, Vera said. About two weeks ago, the couple saw the University of Vermont Folk Music Club perform at Queen City Memory Café in Thayer House, part of Burlington's Cathedral Square complex. Vera took notice as Gale sang along with the band. "When we left, she remembered for five minutes and said, 'That was good music,'" Vera recalled later.

Creating such moments is the goal of Queen City Memory Café. Formed in 2014, it's a monthly gathering for people who have dementia and other forms of memory loss, along with their care partners.

The memory café isn't a support group, nor does it offer respite or counseling for caregivers, said Jessica Clarke, a member of the steering committee.

Instead, the memory café offers participants an accepting environment in which to enjoy activities such as live music, arts and crafts, Hula-Hooping, laughter yoga, and dancing. It stands out for its upbeat mood and its focus on keeping minds and bodies active.

"The memory café is a social mission, and anyone is welcome," explained Clarke.

Alzheimer's disease is the most common form of dementia, a general term for a neurodegenerative brain condition that affects a person's memory and their ability to reason, think, use judgment and plan.

The concept of a memory café, also known as an "Alzheimer's café," was born in the Netherlands in 1997. Those early memory cafés were information-sharing gatherings in which participants discussed and learned about the disease.

In 2008, Jytte Lokvig started an Alzheimer's café in Santa Fe, N.M., with a different mission in mind. The city already had frequent support groups, regular workshops and information sessions on dementia. "However, these programs are focused on the disease," she wrote in an email. What Santa Fe lacked was a safe public event where people living with dementia and their families could relax, socialize and make friends without worrying about appearances or interactions.

"Support groups, by their nature, are safe spaces to vent your frustrations and fears," wrote Lokvig. "On the other hand, the Alzheimer's café gives everyone the chance to share positive experiences, laughter and love."

More than 300 such cafés now operate across the U.S., according to Lokvig, and Vermont has a few, including ones in Montpelier and White River Junction. The founders of Queen City Memory Café said they were inspired to start their own group — the only one in Chittenden County — after learning about the café in Montpelier.

"There was a perceived need in the area for something like this," said Clarke.

On average, between 10 and 20 people, including student volunteers from UVM Larner College of Medicine, attend the multigenerational gathering in Burlington each month, according to Clarke. Students from Champlain College have also facilitated some sessions. The age of the participants who have dementia ranges from 60 to 90, and most live at home with their families.

Some memory cafés still have an educational component and invite speakers, but participants in the Burlington-based group prefer music, Clarke said. Research has shown that music can evoke emotions and memories in people living with the condition.

"We play [everything from] the Grateful Dead to Irish music," said the lead singer of UVM's folk music band to the audience, midway through their recent performance at Thayer House. "But first we have to hit Colorado. John Denver."

"It isn't folk music until your instruments are slightly out of tune," quipped another member as he tuned his ukulele, making the audience laugh.

While Vera and Gale weren't able to attend the memory café until recently, Sky Yardley has been a regular participant since he was diagnosed with Alzheimer's in the summer of 2016.

Like Gale, he sang along with the band that day. But, unlike most of the participants, Yardley also knew song lyrics that weren't printed on the handouts.

"It was really important for me to find my people," said Yardley, 67, at his house two days later. While he couldn't recall what had taken place at the most recent gathering, he remembered the first memory café he ever attended, in October 2016.

"It was fabulous, and it's something I hope I never forget," he said.

At that meeting, the attendees took turns naming a song that was significant to them, Yardley recalled. Someone picked Bob Dylan's "All Along the Watchtower," while an elderly Italian woman sang "Ave Maria." Yardley chose the Beatles' "Let It Be" because it described his emotions after he learned of his diagnosis, he said.

While most participants attend the memory café with their caregivers, Yardley shows up alone.

"I think it's important for him to do stuff by himself without me, because the time will come when he won't be able to do anything without me," said Yardley's wife, Jane Dwinell. Yardley agrees. He still shops for groceries and volunteers at Burlington's Old Spokes Home and Flynn Center for the Performing Arts.

The Yardleys are busy with their own ways of raising Alzheimer's awareness. Their blog, Alzheimer's Canyon, chronicles their experience with his disease. They've also been sharing their story at churches, mostly in the New England area.

"In every congregation, there's been somebody who hasn't told other people in their church that they have dementia," Dwinell said. "Our coming has allowed them to come out and talk about it and look for support in their church."

While he enjoys attending the memory café, Yardley would also like to form a regular support group for people like him who are in the early stages of Alzheimer's. At the support group the couple tried in the past, he had trouble connecting with those who were further along in the disease, Dwinell explained. A previous attempt to form their own group lasted for only three months, however, because of attrition.

"The more I can meet people, the more it becomes a human experience rather than just a terrifying experience," Yardley said. Connection and information, he added, have a "calming effect."

While Yardley and Gale both enjoy the memory café, their needs diverge from there. Gale wouldn't benefit from a support group, Vera said, because she cannot follow conversations. As for her caregiver, "I don't need to go to another meeting to talk about what's happening," said Vera. "What I need is a chance to go to a movie."

Support strategies for the disease may vary by stage and individual, but Alzheimer's is indisputably a big issue in Vermont. The state has one of the oldest populations in the U.S., and the most recent report by the Governor's Commission on Alzheimer's Disease and Related Disorders put the number of Vermonters who will be afflicted by 2025 at 17,000. The projected cost of caring for people living with Alzheimer's in that year is $141 million — an increase of 44 percent compared to 2017 costs.

Martha Richardson, executive director of the Vermont Alzheimer's Association, said the disease is now being diagnosed earlier, in people who are in their forties and fifties. The National Institutes of Health has tripled its budget for Alzheimer's research over the past several years, Richardson added, sending a "clear indication that our nation — and actually the world — is recognizing Alzheimer's as a huge health care crisis."

The members of Queen City Memory Café's steering committee hope their gatherings will mark the beginning of a wider movement to create dementia-friendly communities in the state.

"We need some cohesion around dementia and the challenges of living with dementia," said Clarke.

Some of the things the committee hopes to see include public education, especially of businesses and schools, and a statewide event to develop a network of memory cafés — like that in Massachusetts — so organizers can exchange notes and programming ideas.

Meanwhile, the steering committee is conducting its own research in an effort to fine-tune its programming. Since last spring, Barbara Colombo, an associate professor of psychology at Champlain College, has been analyzing the emotional responses of participants to the memory café.

By recording spontaneous conversations between the people with dementia and their care partners after the gatherings, Colombo hopes to determine which activities offer the most benefits. Though she's still gathering data, she said she's heard glowing feedback.

"It's not easy to have rich, meaningful moments with a family member who's going through a degenerative disease," said Colombo. Of the time that participants spend at the memory café, she said, "these are moments they will remember — being happy together again."