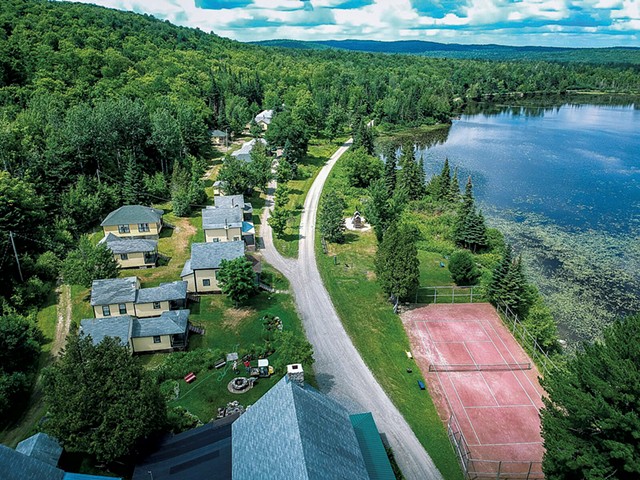 Even in the Northeast Kingdom, you can't get much more northeast than Quimby Country. The rustic resort in the tiny unincorporated township of Averill (population 25) is sandwiched between Forest Lake and Big Averill Lake. It's also minutes from Vermont's borders with both Canada and New Hampshire. In other words, it's smack in the middle of nowhere.

Those who've called the camp's 19 lakefront cottages a home away from home since it opened more than a century ago — including some families who have come every summer for generations — wouldn't have it any other way.

"It's remote and secluded and private, which is what we love about it and what our guests love about it," said Gene Devlin, who has co-owned Quimby Country with his wife, Lilly Devlin, since 2018. "We're kind of a hidden jewel up here in the Northeast Kingdom."

Devlin was speaking to Staytripper on a landline. Cell service is nonexistent in Averill, where your cellphone might think it's in Canada and issue alerts about incurring hefty international roaming charges. Fortunately, visitors to the resort have little need for cellphones — nor the Wi-Fi offered in the main lodge, one of the camp's few concessions to modernity.

"I think people are addicted to their devices," said Devlin, noting that the camp will have cell service next year because of a new cell tower being constructed nearby. But that doesn't mean you should scroll away your hours at Quimby.

"If you want to sit in your cottage surfing the web when you're here, that's up to you," Devlin said. "We'll be out there having fun."

Alternatively, you could opt to while away a day doing nothing at all. The camp's 1,000-plus acres are dotted with Adirondack chairs, benches and swings in vantages both scenic and secluded, inviting naps or time with a good book. 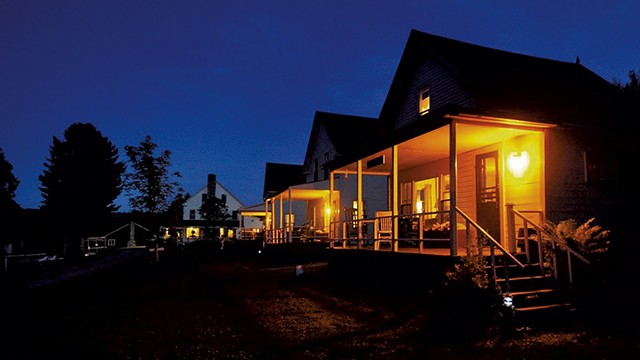 What's now known as Quimby Country first opened in 1893 as the Cold Spring House and was later known as Cold Spring Camp. A local hardware store owner named Charles Quimby ran the place as a fishing camp. Quimby died in 1919 and passed the camp on to his daughter, Hortense Quimby. She maintained the camp's sporting roots but also began to revamp it as a family-style resort, catering to society types from Boston, Providence and New York City.

"Families would come from up and down the Eastern Seaboard to be here, and most of them would stay for the whole summer," Devlin said.

While Quimby Country retains vestiges of its sporting camp past — it hosts a Cast and Blast Weekend in October for anglers and hunters, for example — the family atmosphere fostered by "Miss Quimby," as Hortense was known, remains intact.

When she died in the mid-1960s, a collection of longtime guests bought the camp, intent on preserving it. Aside from a few name tweaks, some 300 shareholders — all of whom had other professions — successfully ran it for more than 50 years much as Quimby had.

"Who knows what would have happened to Quimby's if they hadn't?" Devlin said.

That its guests banded together to keep Quimby Country running for so long is a testament to its uniqueness. But interest in the camp flagged in recent years, which Devlin attributes to the incursion of technology and increasingly demanding professional lives.

"People's vacations are shorter," he said. "And a lot of people need to stay connected. It's just harder to unplug, even when you're trying to get away."

After a particularly rough season in 2015, the camp closed in 2016 to "retool," as Devlin put it. It reopened in 2017 to showcase itself to prospective buyers. The board had decided to sell, ideally to someone with experience in the industry. Enter the Devlins, University of Vermont grads who had previously managed a summer camp in the Adirondacks — coincidentally called Forest Lake.

"We were really interested in working with families and getting them to interact with the outdoors," Devlin explained. Quimby Country, he continued, "spoke to us in every way."

Rustic family resorts such as Quimby Country, where one can truly unplug and "get away from it all," are increasingly uncommon. However, Quimby does have an approximate analog relatively close by: Timberlock, one of the oldest family camps in the Adirondacks, run by Vermont couple Bruce and Holly Catlin. The Catlins and Cornwall-based Devlins are friends who get together in the off-season to compare notes on running rustic resorts.

Devlin noted that Quimby Country isn't quite as primitive as Timberlock. Unlike the latter, Quimby's cabins have electricity. "They're really like little houses," he said. Quimby is also dog friendly, while Timberlock is not.

Devlin said the pandemic has hurt business this season, which was shortened by several weeks on the front end. It also necessitated changes to certain beloved camp traditions, most notably nixing communal meals in the main lodge. Guests are still well fed, but meals are delivered directly to cottages.

Still, Devlin sees a bright side. As out-of-state reservations have dried up, Quimby Country has a seen a surge of interest from staycationing Vermonters, who are traditionally not a significant portion of the camp's business.

"It has been really wonderful to welcome families from all over Vermont," he said. "Every one of them gets here and is like, 'I had no idea places like this existed.'"