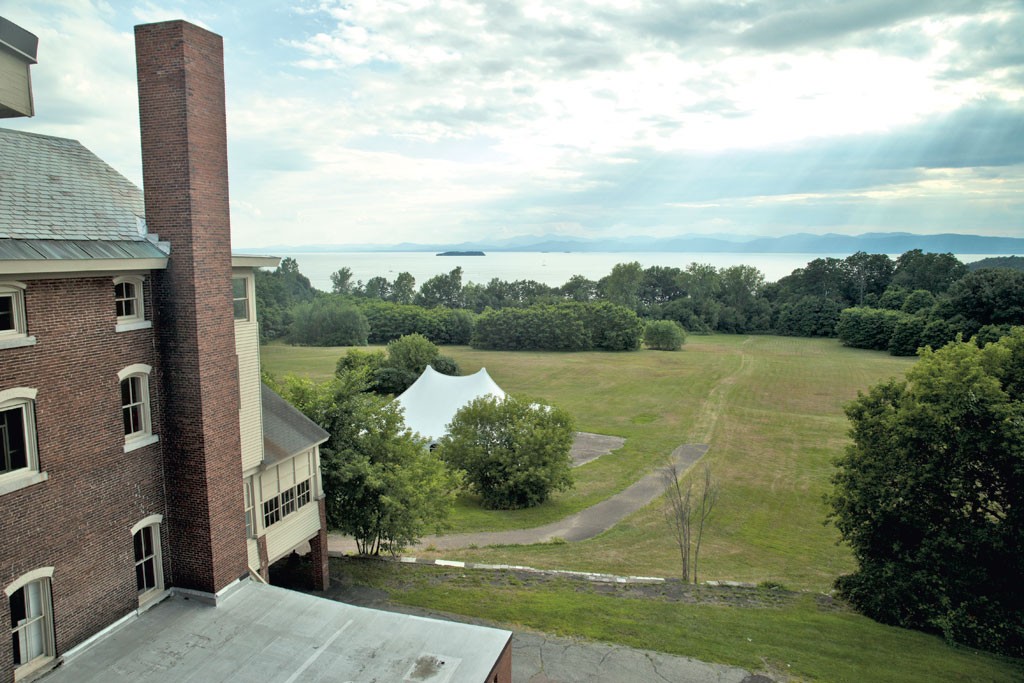 "Start a fire." That's the motto at Burlington College. Lately, though, the liberal arts school's leaders have been busy putting them out.

In late June, the entity that accredits New England schools — a crucial marker of legitimacy — put the Queen City college on probation, citing its fragile finances. Of the 240 schools within the purview of the New England Association of Schools and Colleges, just one other institution is in the same situation, which triggers heightened scrutiny for up to two years.

In a June 27 letter to the college's president, Christine Plunkett, the commission wrote that it was "extremely concerned" that Burlington College, which had no cash reserves, was scrambling to meet summer payroll. It was also "distressed" to learn that officials planned to dip into fall tuition dollars to meet its current financial obligations.

Other red flags: After back-to-back deficits, it was "not clear" the college had a "realistic plan" to get back in the black — and in that money-starved setting, the business office had failed to collect $150,000 owed to the school.

While Plunkett declined to comment on the letter, in a press release she said the concerns were nothing new. She stated the "decision to place us on probationary status formalizes what we have been saying publicly for several years." She characterized the financial problems of concern to NEASC as growing pains, stemming from the school's move four years ago.

Leaders of the liberal arts school had bold dreams when, in the final hours of 2010, they took on $10 million in debt to buy what is arguably the most coveted undeveloped piece of private land within city limits. Then-president Jane O'Meara Sanders, wife of Sen. Bernie Sanders (I-Vt.), envisioned the 32-acre lakeside college campus becoming a cultural center for the Queen City.

Three and half years later, both the dreams and the debt remain.

Plunkett, who was chief financial officer under Sanders starting in 2007, took over as president in 2012. A year later, her administration announced a plan to cut the debt in half by selling and leasing some of the property to local developer Eric Farrell, who wants to build nearly 300 housing units on the land.

Nearly a year has passed, and that land has yet to change hands. Plunkett said she expects to have a deal in place by the end of the summer. Farrell did not return phone calls seeking confirmation of that timeline. (Most of the school's debt is held in tax-exempt bonds, which complicates the process of selling the land to a private entity.)

During an interview in early June, Plunkett riffed on the possibilities. "What if the affordable housing has a daycare in it, and our students go work in the daycare while the moms come over here and take college courses? What if some of our students intern in the senior housing ... What if our community gardens grow food for the senior center?"

Plunkett spoke in her corner office, located in the renovated portion of the 19th century brick building on North Avenue. The estimate to make the rest of the 90,000-square-foot former orphanage inhabitable was once as low as $200,000, according to Plunkett, but is now at least $2 million. The price tag for a complete renovation: upwards of $20 million. Fundraising for that work has yet to begin.

Meanwhile, the offbeat institution that prides itself on its unconventional approach to education is struggling with a very conventional problem: paying the bills. Expecting to max out a $1 million line of credit, it recently took out a $250,000 loan with the Vermont Economic Development Authority.

Budgets have always been lean at Burlington College, which doesn't have an endowment and depends on tuition — $23,500 per full-time student — for revenue. A shift of 10 students has a big impact, for better or worse, on its roughly $5 million operating budget. At a time when Vermont's college-age population is declining, Burlington College is banking on big enrollment growth — from less than 300 to as many as 750 students — and big fundraising goals to survive.

NEASC's decision makes it all the more imperative that the college increase its revenue during the next two years. Yves Bradley, the chairman of Burlington College's board, described the news as a "catalyst" for fixing the finances.

But being on probation might make that harder to pull off.

In an interview last week, Bradley said the capital campaign to renovate the orphanage had been put on hold. Before asking people for money, "We need to make a case to the community that the college is here to stay," he explained. "The time to come to them is not when you are down and in need of a Band-Aid."

The plan, according to school officials, is to focus on recruiting students — an area where they claim to have been successful.

According to a July 7 press release, Burlington College serves 290 students, up from 190 prior to its move. Asked to clarify how many of those students are full-time, Coralee Holm, director of community and alumni relations, said, "We don't have any further information that the college wants to release." A June 18 email between college officials, provided to Seven Days by a source who asked to remain confidential, put the current number for full-time-equivalent students this fall at 212.

The college accepts 83 percent of applicants, according to the National Center for Education Statistics.

Will it be harder for the college to attract students while its accreditation is at risk? Former Burlington College CFO Bill Breen, who left in August 2013 after a year in the post, said it "could very well deter efforts to grow enrollment going forward."

Holm is more circumspect. "There are a variety of reasons why kids come or don't come to college," she suggested.

In recent months, the administration, which currently does not include a director of admissions or a registrar, has asked faculty to help recruit students. A document provided to them after the college was put on probation suggested positive talking points when discussing the issue in public. "Words to use" included "vision," "growth" and "future," while "probation," "risk" and problems" were listed under "less desirable words."

Concerned faculty and staff might need to first convince themselves of Burlington College's sustainability. According to three sources with ties to current employees, a majority of faculty and staff have requested a meeting with Plunkett to air objections about her administration.

Michael Dabroski was hired last fall to create a music program for the college. In June, Plunkett praised his recruiting work, noting that she expected the program to be a major draw for potential students. In July, Dabroski resigned after the college's plans for a classical music festival fell apart — a debacle he blames on the administration. "The institution is a mess financially and in terms of leadership," he said. "How could I in good faith recruit students to this college?"

Dabroski got money for Burlington College, too. He said he was instrumental in securing three of the four gifts that constituted the college's primary donations in fiscal year 2014. Apparently, that's not unusual. Breen recalled, "the president and the development officer were continually attempting to raise funds in the community, but the only gifts I saw come in were a direct result of the faculty efforts."

Breen said he resigned from his job at the college for personal reasons but also because "I no longer had faith in Christine Plunkett and her leadership, or lack thereof." Convincing those who remain will be key for Plunkett, according to her former CFO. "I would think that it is critical that the president has the full faith and confidence of the faculty and staff, as well as the students, during a financial crisis," Breen said.

Where does Plunkett's former boss stand? Sanders said her successor's approach — the development proposal, in particular — doesn't align with what she'd imagined for the new campus. "I had a very strong community vision for the school. We had promised that the space would be used for the community, and I've been disappointed to see that done very minimally ... Judging from an outside perspective, it looks like they devised a different plan. I'm in no position to judge how that has gone, but it's disheartening to see the difficulties they are going through."

Burlington College's board of trustees is behind Plunkett and her plan, according to Bradley, who believes the college is "in better shape now than we were a year ago."

NEASC's opinion? "The fact that these financial-management problems were exacerbated under the leadership of the current President, Burlington's former CFO, does not bolster the Commission's confidence in the ability of the college to resolve the issues successfully and in a timely manner."

The accrediting commission does think a comeback is possible, but it will be watching closely for progress. The school must submit four progress reports before the year's end.

Its June 27 letter to Plunkett states, "The frequency with which the Commission is monitoring Burlington College is an indication of the depth of our concern about the institution."