Can film-program graduates afford to stay in Vermont? 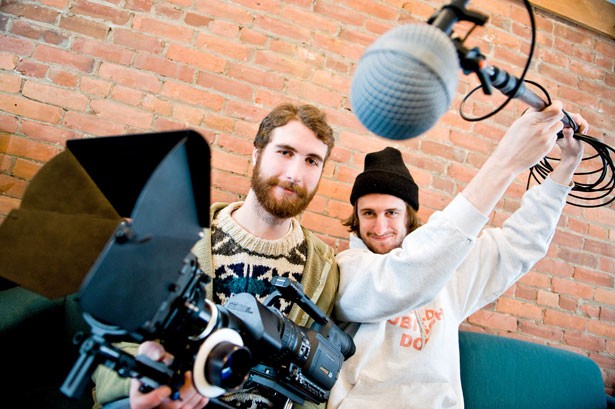 So, you graduate from Burlington College with a degree in film production. It's time to make tracks out to L.A., right? That's where the movie magic happens. Don't expect to work behind the camera locally - at least if you believe Production HUB.com, a widely used resource for tracking down jobs in digital media, which lists no available positions in Vermont as of February 10. Adding insult to injury, http://www.filmschools.com tells us Vermont has no film schools - which might come as a surprise to students in the three film studies or digital-media programs in the Burlington area alone (at the University of Vermont, Champlain College and Burlington College).

That omission might also raise the eyebrows of the quartet of Burlington College grads who worked on Frozen River, an indie shot just across the lake in Plattsburgh, which snagged Sundance's prestigious grand jury prize last month. And it would certainly startle the dozens of recent film studies graduates who work here.

They know that in film, as in so many sectors of the North Country's "creative economy," those who succeed are those who can turn the size of the community, and its low national profile, to their advantage. Burlington's 200-odd film students have choices to make: If they dream of working on a Michael Bay-style studio mega-film, they're unlikely to find that option in the local job market. But if they have a gift for self-selling and are prepared to be patient and creative, they are in a position to tap into an evolving and vigorous local digital-media marketplace.

Joe Bookchin, former head of the film studies program at Burlington College and now executive director of the Vermont Film Commission, finds it fascinating that Burlington fosters a new-media market in the first place. "When I graduated from New York University film school [in 1983], most students wanted to stay [in New York] or go to Hollywood," he says. "It would never have occurred to them to go anywhere else. Now, the old 'two coast' edict is completely gone. Technology has broadened not just what a graduating student can do, but where they can do it."

The key, and sobering, market reality that a graduating student must tackle, though, is that most of the paying local work is commercial. Becoming an auteur is an iffy financial proposition anywhere, but more so here. Though all local film students know the names of celebrated local writer-directors such as the husband-and-wife team of Jay Craven and Bess O'Brien (Disappearances, 2006) and John O'Brien (no relation, Man With a Plan, 1996), they know it takes decades to build such a career - which is seldom a sole source of income. Sure, there's lucrative work, but it consists principally in the shooting, editing and post-production of advertisements and other commercial projects. Independent films may be percolating in the minds of these local cameramen and editors, but they are off-hours and largely no-pay propositions.

Not everyone wants to juggle creative pursuits and a day job. "I don't know of a graduate of ours who has stayed in the area, actually," UVM Film and Television Studies director Todd McGowan says flatly. "Since UVM's program has a heavy emphasis on theory and history, rather than mechanics and production, our students do seem to gravitate to New York or L.A. They want to be filmmakers principally, rather than do commercial work."

Some of those migrants have succeeded royally - such as UVM graduate Jon Kilik, who went west and ended up producing such prestige pics as Babel and The Diving Bell and the Butterfly.

The nuts and bolts of digital media and editing software are pretty much de rigueur in any film studies curriculum these days. But beyond the basics, different schools maintain markedly different emphases. While UVM focuses on theory in its 100-student program, Burlington College's 63-student Film and Cinema Studies program features a wide range of production classes. Champlain College's Digital Filmmaking program likewise has a hands-on orientation. As a result, students from BC and Champlain tend to find it easier to remain in the North Country, where the number of commercial production companies is growing. Bookchin estimates that each year one-third of Burlington College's graduating class finds local media work, and he says a starting salary of $35,000 is not uncommon for a technical position such as film editing.

Georgia Pantazopoulos, a 2007 graduate of Burlington College, currently works as a freelance lighting technician for commercial clients such as Seventh Generation. She finds that the best work strategy for her is to divide time between Burlington and Boston - and between practicality and creativity. "Boston has just exploded with work," she says. "Part of it is tax incentives, and part is the wake behind Martin Scorsese's The Departed. That film just hit a 'gritty street' nerve or something, because there are seven films scheduled to begin Boston production in February."

To Pantazopoulos, the two cities can seem more like one. She often finds herself grabbing rental equipment in Massachusetts to augment the increasingly short supply up here. "People know that they can call me, and I'm in a position to grab what they need," she says. "It's one of the great things about the filmmaking scene in Burlington. There isn't this catty unwillingness to help that exists in a lot of other places."

Adam Beamer and his brother Evan have been working on commercials for Mount Mansfield Media in Colchester since May. Though Adam graduated from Boston's Northeastern University with a music industry major in 2003, he followed his brother's call to head to Vermont - where he, like Pantazopoulos, has noticed the tight-knit nature of the new-media community. Evan's 2006 UVM degree in English and theater introduced him to a community of artists that seemed far more interested in sharing experience than in hoarding it, a dynamic that favorably impressed Adam immediately. "Everyone helps each other out. It's an exceptionally open place," he says.

Adam's work for such clients as Goss Tire and Heritage Toyota may not give him the creative latitude of a Scorsese, but it pays the rent and offers both brothers an opportunity to expand beyond what they perceive as the historically staid local advertising format. "[Ad] clients are often hesitant to step out of the box, creatively," Adam says. "That's why we got very lucky finding this job, because it's actually a safe haven for free thinking."

The Beamers have crafted playful ads for Heritage Toyota (slogan: "The truck is your problem") and a "Naked Hockey" spot for sporting-goods store Mills and Greer, featuring a goalie in his birthday suit.

In recent years, Greater Burlington has seen an explosion of small- to medium-sized web, video, advertising, editing and production studios, such as Mount Mansfield Media, Henhouse Media in South Burlington and Egan Media in Colchester. While that gives recent grads cause to celebrate, the growth of the market also raises the bar for job seekers, who are expected to be versatile and highly skilled, just like in the metropolis. The tender days of "I'm just a sound engineer" have been replaced by a jostling world of people who combine the creative talents of a writer or artist with serious Final Cut Pro chops.

"Welcome to the 21st century," says Karen Klove, co-advisor for the Digital Filmmaking program at Champlain College, with a laugh. "Today, everything is ultimately digitized, so students need to be working both brain hemispheres all the time. That's why the program here is designed to have - as I often say - a technician's hand, an intellect's head and an artist's soul." The new program has 28 students, and Klove says she'll use her own networks to help them find local jobs after graduation.

Champlain College film student Geoffrey Klane finds his community appealing. But he realizes that, as an aspiring feature filmmaker, he may need to make tracks in order to make hay. "[Local] opportunities may come with a bit of research and time," he says. "At the moment, though, I think that I will probably make the move to either New York or Boston." Fellow Champlain film student Rebecca Schmidt also sees a post-graduation move in the offing. But she's quick to point out, "The film culture in Vermont has been steadily growing, so it might be beneficial someday to come back and work here."

Relentless networking and self-promotion are crucial to surviving in such a small pool of workers. "Being a self-starter is essential," offers Joe Bookchin. "Even a community as ostensibly friendly as Burlington is still intensely competitive." Karen Klove agrees. "Freelance work is much of what keeps the local digital media marketplace going," she explains, "and any freelancer will tell you that they need to divide time pretty equally between work and finding work."

Still, Klove sees a future that's bright, if unpredictable, for savvy media people. "I couldn't tell you exactly what sort of jobs there are going to be in 10 years, really," she admits. "Just as I couldn't tell you what today's media world was going to look like 10 years ago. Things are changing so rapidly that forecasting is very tough."

Klove does, however, see two encouraging signs for film studies students, particularly those looking to stay local. One is the increasing irrelevance of location as the virtual office world evolves. The other is harder to pin down, but she says it involves a recognition that the world is evolving into a society of images rather than words. On Internet news, commercial and entertainment sites, video clips are increasingly replacing text and still photos - and someone has to shoot, edit and compress all that material.

"Filmmaking is now our predominant storytelling medium," Klove explains. "In a broader sense, that means that we are switching from an alphabet to a visual language. We can debate the merits of that, but it is happening, and the digital beast will need to be fed."