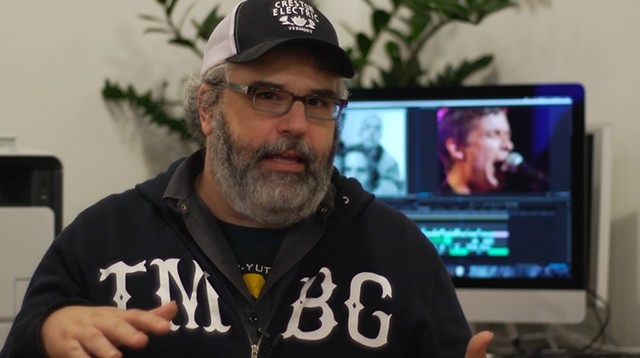 Burlington filmmaker Bill Simmon reckons that local musical legends the Pants were a "going concern" for just a bit more than two and a half years: the four original members played together only from May 1994 to January 1997. Their brief run came at a moment when it seemed a Queen City rock band could break out as the Next Big Thing — a moment when people wondered whether Burlington might become the "next Seattle."

The colossal success of Phish notwithstanding, that moment never arrived — for the Pants or the local music scene. Beset by interpersonal and professional tensions, the band folded.

Two decades on, though, the Pants continue to incite ardor in the hearts of many a local music fan. Simmon considers himself one of them. Even so, his new, slyly titled documentary High Water Mark: The Rise & Fall of the Pants is not exactly a love letter to the band. It's more of a loving investigation into the special relationship between a band and its devotees. The film, which Simmon has been working on since the Pants played a one-off reunion show in May 2006, will finally premiere at Higher Ground in South Burlington on Saturday, March 26.

Before the show, Seven Days staff photographer Matthew Thorsen will present a slide show of his images from the 1990s heyday of the Burlington music scene. After the screening, a raft of Burlington musical luminaries will perform "interpretations of the Pants songbook," according to the event poster. They include Ryan Miller of Guster; Ryan Ober, late of Invisible Jet and current front man of the Loose Ends; Jason Cooley, late of the Fags and currently in Blue Button; and cartoonist-musician James Kochalka, whose band James Kochalka Superstar often shared the stage with the Pants.

Playing the part of "house band" will be local rockers Swale, with a guest appearance from Pants front man Tom Lawson. (Disclosure: Seven Days played a role in organizing this event.)

Cooley says he will perform the Pants' "I Used to Be," which the band would often play near the end of its set. The song's humorous tone affords a certain amount of performative leeway, a fact not lost on Cooley. "You can do good on those songs," he says, "but a lot of people will get upset if you tarnish [them]."

The roster of local musical acts confirms one of the central claims of Simmon's film: that the Pants came unstitched 20 years ago but still represent for many an apotheosis of local musical creativity.

"There was this connected feeling across the whole town," Simmon says between sips of coffee at Speeder & Earl's. "Every night of the week, there was [music] that was original, live, local and good ... And everyone would see the Pants. You could be into any kind of music and still love what the Pants were doing. That's a hard thing to do for any band."

Simmon, who takes the unusual step of interviewing himself in his own film, concurs with many other interviewees that the Pants were unusually meaningful and beloved to legions of local admirers. "I want to say, 'You had to be there,' but if you had to be there, then what the hell's the point of making this movie in the first place?" Simmon asks rhetorically. Still, he acknowledges, "There was something about being in those rooms at the time, and being in the crowd when you knew everyone in the room was feeling the same thing you were feeling."

The director is a fan of the rock documentary — he cites as general influences the 2002 film about Wilco, I Am Trying to Break Your Heart, and the 2003 film Jandek on Corwood. Simmon says he wanted to avoid making a film that could only be appreciated by diehard fans of its subject.

"The film treats the band like it's the best band you've never heard of, but I know, in reality, that's not really the case," says Simmon. "Many people, they're gonna hear the music and be unmoved by it, and that's totally OK. I think, I hope, that the film is still interesting on a certain level despite that."

Among the interviewees for the film are all four members of the Pants — guitarist-vocalist Lawson, bassist Eric Hutchins, drummer Neil Cleary and guitarist Paul Jaffe, aka Pistol Stamen; Casey Rae, now CEO of the nonprofit Future of Music Coalition, former Seven Days music editor and erstwhile member of '90s Burlington rockers Rocketsled; and a wide array of other Burlington musicians and scenesters past and present.

Kochalka adds wryly, "I didn't even really know I was in that movie. I can vaguely remember maybe somebody interviewing me — it was so long ago."

Simmon makes light of the fact that it took him a decade to create his hourlong film but stresses that it wasn't for lack of trying. Every year since shooting the 2006 reunion show, he would take a week off from his full-time job as director of media services at Vermont Community Access Media to organize more than 45 hours of footage. Simmon says he struggled to identify the film's intended audience, and then, about a year ago, had a moment of clarity.

"I stopped worrying about who the audience was and started making the film that I wanted to see, as a fan," he says.

Last May, Simmon began editing in earnest. The central challenge from that point, he says, was the fact that the film's subject was no longer active. There were no concerts to shoot, no fractious woodshedding for an upcoming record to provide narrative conflict.

But Simmon had a wealth of archival footage, and the most crucial element turned out to be that 2006 reunion show. Cleary had tipped him off about it, and Simmon quickly assembled a crew to make what he thought would be a straight-up concert film. He and producer Jeff Lawson (Tom's brother) recorded a clean audio mix from the soundboard, got some preshow greenroom footage and a few talking-head interviews. It all turned out to be the foundation of a much larger undertaking.

"I didn't really understand the enormity of the project I was embarking on," Simmon says. A year later, he was still shooting interviews and gathering archival ephemera such as concert fliers and promo photos. Simmon completed his final cut just this month.

To watch High Water Mark is to look through a multipaned window onto Burlington's musical past. At a decade's remove is the reunion show; two decades in the past are the band's glory days, recounted mostly through interviewees' remembrances and an array of audio recordings.

In a nod to the 1990s, Simmon made his film not in high-definition video but in 4:3 standard def. He even downconverted the video quality of recently shot footage so it conforms to pre-HD standards.

Yet Simmon does not shun modern technology. In fact, he's been digitizing and regularly uploading vintage recordings of Pants shows to SoundCloud, releasing each one on its 20th anniversary. They're all part of his multimedia efforts to celebrate and preserve the memory of a beloved band. "If I could get those guys more fans — more fans than just the people who lived in Burlington in the '90s — that would make it all worth it," Simmon says.

The original print version of this article was headlined "Maker's Mark"