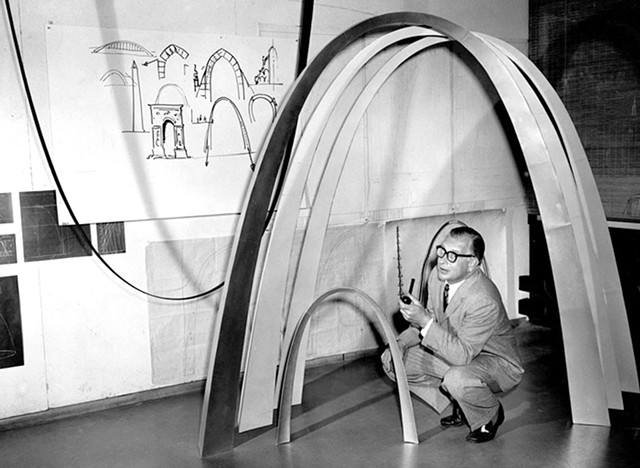 The midcentury-modern Finnish American architect Eero Saarinen lived only to the age of 51, but he left behind breathtaking works. Standing inside his cylindrical brick chapel at the Massachusetts Institute of Technology — to take the example nearest to Vermont — a visitor might view the column of natural light illuminating the altar and consider converting. To the religion of architecture, anyway.

"When you first walk in, you're overcome by this indescribable feeling that you've arrived at something magical," says Andrew Chardain, a designer at Birdseye in Richmond. The soon-to-be-licensed architect visited the chapel during a service in an effort to balance out the "elevated expectations" that come from studying Saarinen on the page, he says. Chardain also visited Saarinen's Kresge Auditorium across the MIT campus green, a structure whose roof resembles a triangular section of orange peel pinned to the ground at the corners.

Those buildings and Saarinen's other iconic masterpieces — the TWA Flight Center terminal at John F. Kennedy International Airport; Washington Dulles International Airport; the St. Louis Gateway Arch; the Miller House in Columbus, Ind., to name a few — are the subject of Eero Saarinen: The Architect Who Saw the Future. The film, a PBS "American Masters" special from 2016, is one of eight lined up for this year's Architecture + Design Film Series at Burlington City Hall Auditorium.

Chardain cofounded the series five years ago with Lynda McIntyre, a University of Vermont emeritus professor of studio art; and Karen Frost, co-owner of Vermont Eco-Floors in Charlotte. Burlington City Arts and the UVM Department of Art and Art History copresent the free series. American Flatbread Burlington Hearth will donate the edibles, and Lee Anderson of Radio Bean, ¡Duino! (Duende) and Light Club Lamp Shop will provide a cash bar. Graphic designer Ted Olson of Tally Ho Design has created the series' posters and brochures — a key component of a design-centric venture.

McIntyre, Frost and Chardain each vet scads of films about architecture and design every year before agreeing on their selections. They also take recommendations, as in the case of the Saarinen film. Devin Colman, the state's architectural historian, proposed it as a way of showcasing a Vermont link to Saarinen.

Colman discovered that, while Saarinen himself did no work in Vermont, four of his close colleagues did. As Colman will explain in an introduction to the documentary, architects James Henderson Barr, William Linde and Robert Burley and landscape architect Dan Kiley all worked on Saarinen's St. Louis Gateway Arch (1947-1965) before moving to Vermont to set up their own practices.

One of the four, Burley, is still living. Now 89, he retired a decade ago from Burley Partnership in Fayston, handing the reins to his architect daughter, Jill Burley. Bob will talk about his experiences in the Saarinen office at the film screening.

The aforementioned Barr, Colman says, was "the genesis of that whole line of architects." In 1945, Barr joined Saarinen Swanson & Saarinen, the firm founded by Eero's father, Eliel, an eminent practitioner of traditional and early-modern styles. When Eero submitted a proposal depicting an arch to the Jefferson National Expansion Memorial competition in 1947, Barr was associate designer, and Kiley designed the 91-acre site's landscaping. Their proposal, illustrated in stunning renderings by Barr, won over a competing one by Eliel. (Eero's son Eric, who narrates the film, describes the awkward notification mix-up.)

Funding for the arch took so long to materialize that the project wasn't completed until 1965, four years after Eero Saarinen's death. In 1956, Barr and his colleague Linde left Saarinen's office for Vermont, where Kiley had already established his office in Charlotte. The firm of Barr and Linde, originally in Essex Junction, would eventually morph into Burlington Associates — designers of such local modernist landmarks as the University of Vermont Recital Hall and the Cathedral Church of St. Paul — and, finally, into TruexCullins.

Saarinen hired Burley the year that Barr and Linde left. The Kenmore, N.Y., native had been working in nearby Buffalo after earning his master's in architecture at Columbia University when a friend invited him out to Saarinen's office in Bloomfield Hills, Mich. Saarinen offered him a position on the spot, recalls the architect, speaking by phone from his home in Fayston.

Burley worked nearly eight years in Saarinen's office, where he led the design teams on the arch and the U.S. embassy building in London. "I was in the office when the funding came through [for the arch]," explains Burley, "so Eero said, 'OK, Bob, you be designer-in-charge.'" Burley's wife, Pat, assisted Aline, Saarinen's second wife, with the firm's public relations.

Of the PBS documentary, Burley comments, "People will see the film and think these things are beautiful and he just plucked the ideas out of the air. But actually he was very practical, analytic and persistent. He was interested in knowing that his very beautiful designs were actually working — for the hockey player, the secretary or whoever was using them."

Burley left for New York City shortly after Saarinen's death. In 1964, he moved his practice to Vermont, where he and his family regularly skied, and his interests expanded from modern design into historic preservation and adaptation. He spent four years lobbying to rehabilitate the historic Pavilion Hotel in Montpelier. (In a compromise, it was torn down and rebuilt with the same exterior, using many original parts.) Burley designed the present-day Trapp Family Lodge and expanded the Statehouse and UVM's Bailey/Howe Library. He also designed Maple Tree Place in Williston and expanded Wake Robin in Shelburne.

While Saarinen's influence can't be directly traced in Burley's work, as it can in Barr and Linde's, Burley nevertheless acknowledges the master's impact was "tremendous." His advice to architecture students: "Sign with the best architect there is in the world, whether it pays or doesn't pay."

Saarinen is the only architect highlighted in this year's A+D Film Series. Other films include docs on local stone worker Dan Snow, fashion designer Christian Dior and city-planning activist Jane Jacobs. Says Chardain, "Every year we try to step a little further outside the boundaries" of expectation.

Eero Saarinen, beautifully filmed, is a highlight of the lineup. It's also one way to sample — without leaving town — the widely varied output of one of modern architecture's masters. Notes Colman, "There was no stock Saarinen design. Every building pushed the limits — materially, technologically, design-wise. They're all showstoppers."