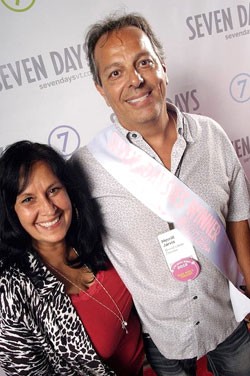 It’s official: Chittenden County’s movie theaters are now all locally owned. On Friday, November 16, Merrill Jarvis III told Seven Days that his family purchased Palace 9 Cinemas in South Burlington, formerly owned by Massachusetts resident Harold Blank. The Jarvises also bought Blank’s 50 percent share of Majestic 10 in Williston, the all-digital theater they built and opened with him in 2004. That leaves Essex Cinemas as the only greater-Burlington movie house not owned by Merrill’s Theater Co.

Owning the Palace is nothing new for the Jarvis family, which built the multiplex on Shelburne Road in 1992 and sold it a few years later. Under Blank’s ownership, the nine screens showed a mixture of mainstream and “specialty” (art-house) films using 35-millimeter projection. That will soon be a thing of the past: “We will be upgrading to all digital theaters and digital sound,” Jarvis said, “probably in the spring.”

Otherwise, he continued, the format of the Palace “will be basically the same,” with any changes “geared toward customer service.” The multiplex, Jarvis said, “needs some TLC.” But he hopes to give it “the same winning quality” as Merrill’s Roxy Cinemas, the family’s flagship theater in downtown Burlington.

Sad news for local Star Wars fans: On November 18, via Twitter, Burlington-based director Colin Trevorrow dismissed the rampant rumor that he had been tapped to direct the next chapter in the saga. “To clarify,” he wrote, “there is another film we all love that I’m currently trying not to mess up. Odds I will direct Episode VII: 3720 to 1.”

Now we’re wondering about Trevorrow’s real next project — and hoping all this exposure in the entertainment press brings new viewers to his SF-tinged indie film Safety Not Guaranteed, recently released on video.