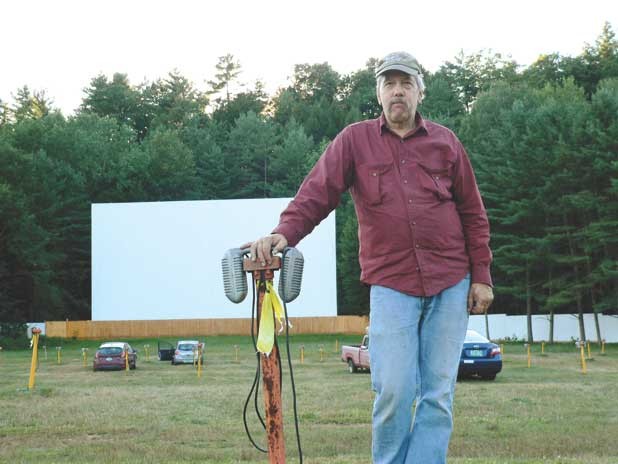 It’s not often that Vermont fundraising appeals are heard in Europe. Last summer, Seven Days reported on the Fairlee Drive-In’s quest to raise more than $70,000 for its conversion to digital projection. Now BBC News has made that drive-in and its owner, Peter Trapp, the centerpiece of a story called “Last Reel: The Death of the Drive-In Cinema?”

In the piece published on August 14, reporter Kim Gittleson quotes Trapp as saying he and his family have raised about $15,500 for the conversion, and if they can’t close the gap by the end of the summer, it will “very likely” be the six-decade-old drive-in’s last. In a last-ditch effort, Trapp has entered the Fairlee in a Honda-sponsored contest called Project Drive-In; the auto company will donate new digital systems to five drive-in theaters chosen by popular vote.

With the deadline looming — Hollywood studios will ship their last 35-millimeter film prints this year — the Fairlee isn’t the only Vermont drive-in angling for that prize. You can also vote once per day for Colchester’s Sunset Drive-In or Bethel’s Randall Drive-In at projectdrivein.com.

Meanwhile, Vermont’s indoor theaters have already undergone digital conversion, but some smaller ones are still appealing to the public to help them meet the costs. “Friends, our back is against the wall,” writes Bill Shafer, owner of Middlebury’s 74-year-old Marquis Theatre, on his website. Montpelier’s Savoy Theater has sent numerous appeals to its membership list, and Waitsfield’s Big Picture Theater & Café is still taking donations in the wake of its successful Kickstarter campaign.

So if you want your favorite small-town screen to stick around, now’s the time to be generous.

It’s also not often that celebrated European filmmakers shoot in the Green Mountains. German auteur Werner Herzog did just that for a segment of his 35-minute documentary about the dangers of texting while driving, “From One Second to the Next,” commissioned by AT&T’s It Can Wait campaign. If you haven’t already, check out the haunting doc at our Live Culture blog or itcanwait.com. It features a segment on Debbie Drewniak of Colchester, who was critically injured when she was struck by a texting driver in 2011.

Want to see Herzog himself — in the flesh? The Hopkins Center for the Arts has lured the eccentric maestro back to our area for events scheduled for September 18 and 19, including a showing of his 2005 doc Grizzly Man. Watch this space and our blog for details.

Halloween is months away, but some Vermonters are getting in the spirit — and getting attention. On August 28, the crew of the Travel Channel’s series “Making Monsters” will visit North Danville to shoot a segment devoted to the Great Vermont Corn Maze and Dead North: Farmland of Terror. Both seasonal attractions are run by Mike and Dayna Boudreau on their fourth-generation dairy farm. The episode, slated for an October airing, will give locals a rare glimpse inside the Boudreaus’ rustic scarehouse; Dead North runs for just two weekends, starting this year on October 4, and routinely sells out.

Jay Craven’s latest film, Northern Borders, is still going strong on its 100 Town Tour. The director writes that he recently returned from a week of sold-out screenings on Cape Cod. There he showed the Vermont-shot drama based on a Howard Frank Mosher novel to its star, recent Cannes Film Festival winner Bruce Dern.

This week, Chittenden County residents have three more chances to see Northern Borders on their home turf, in Burlington and Shelburne, with Craven speaking at each screening. The director and Marlboro College prof made Northern Borders with the help of college students who received credit from their schools for the hands-on experience; now he’s recruiting undergrads for his next semester-long film intensive.

Craven’s Kingdom County Productions is busy these days: His wife, Bess O’Brien, has a premiere date for her new documentary, The Hungry Heart, about prescription-drug addiction in Franklin County. That first look will happen on September 21 in St. Albans, with a tour of the state to follow.

American terrorists, or idealists in action? Viewers can make up their minds this Thursday at a screening of The Weather Underground, a 2002 documentary about the radical leftist group that bombed banks and government buildings in the 1970s. Ron Jacobs, Burlington author of a history of the Weather Underground, will speak at the screening, which is presented by the Burlington Film Society, Main Street Landing Performing Arts Center and the Peace & Justice Center.

The original print version of this article was headlined "Short Takes on Film."