'I Am Evidence' Documentary Examines the Rape-Kit Crisis 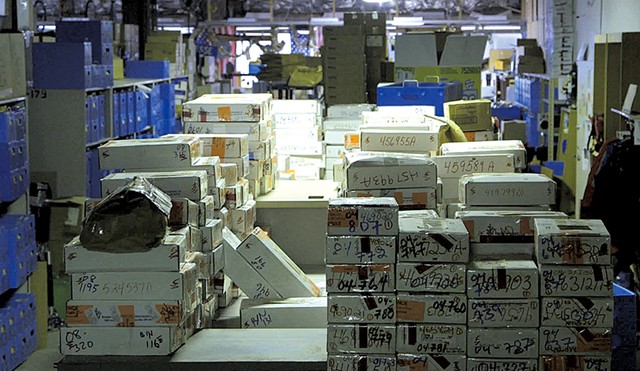 In a 2010 episode of "Law & Order: Special Victims Unit," New York Police Department Detective Olivia Benson, played by Mariska Hargitay, travels to Detroit to collect evidence on a serial rapist who has assaulted women across the country. Arriving at a police evidence storage facility, she stops dead in her tracks. "You've got to be kidding me," she mutters as she surveys racks piled to the ceiling with thousands of untested sexual-assault kits.

While the show's story line is fictional, it's based on fact. In 2009, the Wayne County, Mich., prosecutor's office discovered more than 11,000 untested rape kits sitting in storage. As detailed in the Hargitay-produced documentary I Am Evidence — which will be screened Sunday, February 18, as part of the Middlebury New Filmmakers Festival's third annual Winter Screening Series — rape-kit backlogs similar in scope to Detroit's were discovered in major cities around the country, including Cleveland; Memphis, Tenn.; and Los Angeles.

"At the end of the day, [rape-kit testing] is a very important public safety issue to save lives," says I Am Evidence codirector Trish Adlesic in a phone interview from New York. "These kinds of crimes escalate, and we want to keep people safe. We have the science so readily available."

That science isn't always being used to track and test kits, though — even in Vermont, where the backlog of untested kits is smaller but still a matter of recent legislative concern.

A rape kit is a package of biological evidence gathered from a victim following an allegation of sexual assault. The examination takes four to six hours and is highly invasive. A victim doesn't have to report a crime to have a rape kit collected, but the evidence gathered during the exam can be used to form a DNA profile for prosecution in a criminal case.

The causes of the national rape-kit backlog are varied and complex. One issue is cost: A basic serology exam is about $300 to $400, but more extensive DNA testing can run $1,500 or more for a single kit. I Am Evidence also examines systemic issues such as sexism and the role institutional racism played in the predominantly African American city of Detroit.

The documentary features interviews with multiple victims of sexual assault, including Los Angeles resident Helena Lazaro, whose story formed the basis for that groundbreaking "SVU" episode about the rape-kit backlog. A powerful segment crosscuts between testimonials by Lazaro and a woman from Ohio, both of whom were raped by the same long-distance trucker. Had Lazaro's rape kit not been kept in untested limbo for more than 13 years, the subsequent assault might have been prevented.

Adlesic, who served as a location manager on "SVU" from 1999 to 2014, notes that the two women linked by shared trauma met for the first time at the documentary's Tribeca Film Festival premiere.

"One of the things around the film that's been so profound is just that, by giving people an opportunity to be heard and supported, it's almost transformative," Adlesic says.

In 2015, the U.S. Department of Justice estimated that there were roughly 400,000 untested rape kits nationwide. End the Backlog, an initiative of the Hargitay-founded Joyful Heart Foundation, provides detailed information on a statewide basis. Vermont is one of 13 states whose backlog is listed as "unknown."

A recent audit uncovered the extent of the problem in the Green Mountain State. The Sexual Assault Evidence Kit Study Committee, which the Vermont legislature created as part of Act 68 last year, found that 58 kits had been identified as unaccounted for between 2012 and 2017. "Many of these kits are likely stored in evidence lockers at various law enforcement agencies or may have been discarded at various points in the transport chain," the panel concluded in a report issued November 15.

Vermont Forensic Laboratory director Trisha Conti, who served on the kit-study committee, tells Seven Days that the final number of missing kits was actually 63. She says the forensic lab has been working with the Vermont Network Against Domestic and Sexual Violence to contact hospitals and law enforcement agencies and track down the kits.

Thus far, Conti notes, one kit has been identified as having been destroyed; eight kits were opened at a hospital but never used; four kits had already been tested but weren't properly accounted for; eight kits were found and have been submitted for testing in Vermont; and 10 additional kits were discovered that fell under the law enforcement jurisdiction of other states. (The last scenario tends to arise near the state border where the alleged assault and the hospital are in different jurisdictions.) That leaves 32 kits whose whereabouts remain unknown.

A final report from the kit-study committee, submitted to the legislature on December 29, recommended that Vermont adopt a web-based kit-tracking system to consolidate the reporting methods of hospitals, law enforcement agencies and the forensic lab. Specifically, the committee advised that the state implement a solution similar to the system adopted by Connecticut in 2017, which uses UPS Trackpad software that functions much like the parcel service's home-delivery package tracker. The report notes that the monthly cost of the system is approximately $600.

"I think, regardless of whether or not the legislature gives us funding for it as a separate line item, we're going to try to come up with the funds to move forward with it anyway, just because I think it would be so much more efficient than what we have now," Conti says.

The Sunday screening of I Am Evidence in Middlebury will be followed by an in-person Q&A session with Adlesic, moderated by Vermont filmmaker Bess O'Brien. MNFF producer Lloyd Komesar, who met Adlesic at the Savannah College of Art and Design's film festival in October, says the winter screening of her documentary is part of MNFF's ongoing focus on social issues and the work of female directors.

"The untested rape-kit issue is massive," Komesar says, "and I think this film brings a rather searing spotlight on just how large the problem is and how much effort, collectively, is going to have to be expended to make a difference."