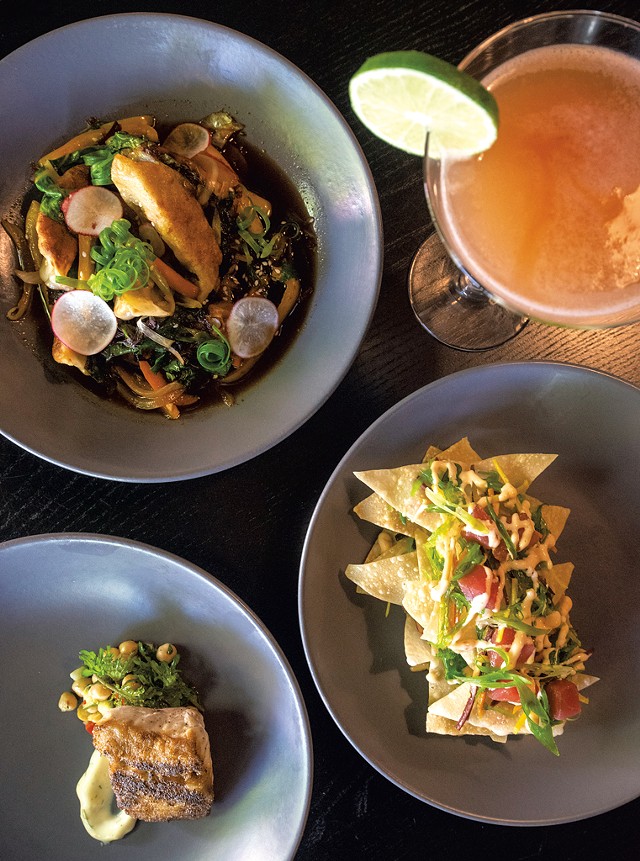 Before my first visit to Hugo's Bar & Grill in Montpelier, I experienced culinary déjà vu. Perusing the menu online, I noticed an appetizer of gazpacho with a side of shrimp, a salad using greens from Small Axe Farm in Barnet, and an intriguing take on nachos constructed of wonton chips with tuna tartare, spicy mayo and seaweed. In May, I'd eaten those very dishes at the Inn at Burklyn in the Northeast Kingdom town of Burke.

It wasn't simply synchronicity. Hugo's went through a few rough months after its Valentine's Day opening, owner Thomas Christopher Greene told me. But the restaurant turned a corner in June, when he hired John Hessler, formerly of the Inn at Burklyn, as his third executive chef.

Now, even as food and beverage businesses continue to feel the pandemic fallout, the 160-seat restaurant is thriving. It offers dual menus: a written one with familiar bistro dishes (plus some interesting fusion) and a list of daily specials recited by the servers. Both allow diners to take the road less traveled or retread familiar paths, noting the small tweaks that come with seasonal changes.

The combination works well for Greene, who dines at the restaurant every night when he's in town. A novelist and former president of Vermont College of Fine Arts, he generally leaves managerial tasks to Hugo's team of industry professionals. He simply enjoys working on his upcoming novel at the bar and taking breaks to visit with friends in the dining room.

Twenty or 30 minutes before service, Greene said, he strolls through the kitchen to experience "the sauces bubbling, the smells, the sounds and the labor" that turn ingredients from fine farms and one excellent fishmonger into dishes such as slow-roasted chicken with whipped potato and truffle and summer vegetable pad Thai.

In 2019, when Greene announced his resignation as founding president of VCFA, he didn't know opening a restaurant would be his next step, but it wasn't much of a stretch. Greene worked at a pizzeria in his youth and spent his college years shucking oysters on Block Island. His 2006 novel I'll Never Be Long Gone centers on a Vermont restaurant. In Montpelier, he was known as a frequent restaurant patron who sent students and faculty to his favorite spots.

"Restaurant people have always been my favorite people," he told Seven Days. "They have the best stories and are the most fun." 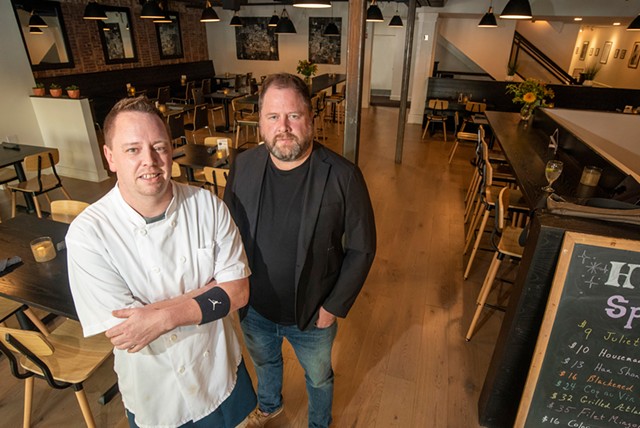 Greene initially decided to open two small restaurants in downtown Montpelier, one serving bistro fare under the Hugo's name and the other focusing on street food. The lockdown scuttled those plans, but soon he cast his eye on the three-story building that had housed NECI on Main.

"There's been a restaurant there since the 1880s," he noted, "and now it was closed." Bringing the historic building back to life also reminded him of how VCFA repurposed the Victorian campus of the former Vermont College.

The Main Street spot's expansive seating and robust kitchen allowed Greene to combine his two concepts into one: a gathering place that would serve "great wine and cocktails" and "unfussy, unpretentious" food that is delicious, seasonal and local — without striving to "win a James Beard Award," he said. Some of the dishes would be affordable; others would be elegant enough to satisfy the special-occasion crowd.

How Hessler transforms that concept into menus is "entirely up to him," Greene said. "I've never said: 'Don't do that!'"

He's particularly taken with Hessler's specials, of which there are as many as eight per day. These evanescent offerings might be inspired by a delivery from Massachusetts-based Wood Mountain Fish, which brings seafood from Boston's docks to Vermont; by a newly available autumnal vegetable; or by dishes from around the world.

"I trust him implicitly. His food is incredibly well executed," Greene said of the chef.

For my first Hugo's meal, I revisited the tuna tartare nachos ($15) that I'd enjoyed in Burke. Just like the first time, each chip sported its own pile of raw tuna, laced with strands of wakame and dotted with scallion. The dish is a brilliant, upscale version of the classic; even the second time around, it left me wanting more.

Another highlight was a full rack of saucy ribs served with crisp, well-seasoned fries and slaw with cabbage, red onion and multicolored carrots ($29).

Some other dishes I tried that evening were good, but less memorable. Oysters ($3 each) came with classic mignonette and cocktail sauce on a silver platter; summer rolls ($12) featured tender rice noodles and basil with a spicy-sweet-tangy dipping sauce. A s'mores dessert with mini marshmallows ($10) was cute but a touch too sweet for my taste.

The piri piri chicken wings ($14), however, were literally forgettable. I ordered them on my second visit, dreaming of the spicy, tangy and sometimes smoky piri piri chicken I'd eaten several times in Portugal. Hugo's wings were nicely cooked and came with crunchy cucumber and onion in lieu of carrots and celery, but they were barely sauced and had little flavor. My camera roll confirmed that I'd eaten them before and forgotten all about it. 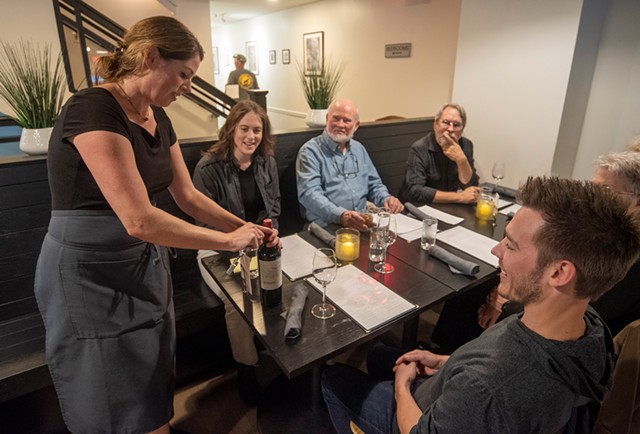 Herein lies the downside of trying to run a restaurant for everybody. The dishes on the regular menu need to have oodles of crowd appeal, which means they can't be too spicy, complex, unfamiliar or edgy. (One upcoming exception: Hessler plans to have calf-liver butter on the autumn menu.) Serving a cup of spicy sauce on the side could have improved the wings without alienating spice-averse patrons.

That dish was an anomaly, though. Hugo's greatest strength lies in combining pleasant, crowd-friendly dishes — cheddar fondue ($16.50), smoked salmon pizzette ($16), a Cobb salad ($17), a burger ($16) — with a strong showing of specials.

On my second visit, those specials were my focus. Cajun-spiced bluefish ($16) was perfectly seared and broke into thick flakes under my fork. Beneath it was an elegant chickpea salad speckled with shallot. Pork dumplings ($15) were nestled in a bed of kale, red bell pepper and lightly cooked onion, all doused in a tangy, saline, slightly spicy soy-based sauce. I ate half of them and woke the next morning wondering how long I had to wait to eat the final three. Answer: dumplings for breakfast.

Having once owned a restaurant in Montpelier (where Greene was an occasional visitor) and having run a café during the Delta and Omicron waves of COVID-19, I'm particularly sensitive to the trials of a new business. When you take into account current sourcing and staffing challenges and diverse customer needs, Hugo's is killing it, even if a few of the regular-menu dishes struck me as good but not exceptional.

One of the best parts of my second visit was the service. Shawn Naramore, one of the waitstaff that evening, was particularly thoughtful and conscientious. She put in my takeout order after my main course had arrived so that my absent partner's curried red lentil burger ($16) would be hot when I got home. She separated my hot and cold items into different bags. When I mentioned a dietary restriction, she remembered it later when I ordered dessert. 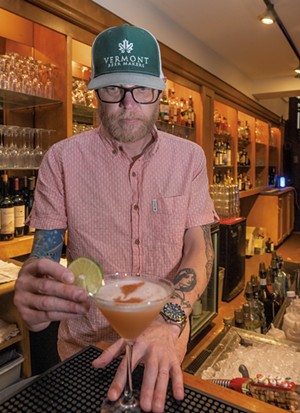 The drinks are another Hugo's highlight. Its beer menu, short but deft, hits all the right notes for food pairings or simply imbibing at affordable prices. Currently, each beer on the menu comes from a different brewery and showcases a different style, from gose to sour to stout.

I'll always choose a cocktail over a brew, though, especially when it features ingredients such as velvet falernum — a Barbadian rum-based liqueur infused with lime, almond and clove. That one appears in a drink called The Secret History, named for the Vermont-based Donna Tartt thriller that happens to be one of my favorite novels.

Greene christened the cocktails in high style, naming them after The Catcher in the Rye, an operetta by Johann Strauss II, Napoleon Dynamite, and, in a cheeky move, two of his own novels: The Perfect Liar and Envious Moon.

"Envious Moon is one of my favorite novels," Greene said. Its namesake cocktail — a blend of Barr Hill gin, St. Elder liqueur, lemon and pomegranate — is a runaway hit.

"We've easily sold more Envious Moon drinks than copies of the book," Greene said. "It's like a fantasy game, having the cocktails be bestsellers when the books might not be."

Greene keeps the topic of his next book close to the vest, though he did say it's not about the restaurant industry. But he has no problem waxing poetic about Hugo's: "It's a love letter to this town I've been in for a very long time."

It's a love letter worth revisiting again and again.

The original print version of this article was headlined "Déjà New"