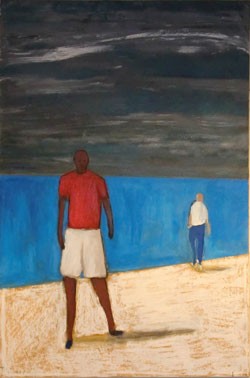 It takes courage to allow your creative talent to be publicly judged. Courage is also required to publicly judge the talent of another — particularly in a small town where even a gently negative notice can exact a lasting personal price.

Marc Awodey hence gets to wear two badges of courage: one for being an artist who puts his paintings on display; another for regularly reviewing art shows for this publication. He also merits an oddball award, because only a few figures in art history have proved equally adept with pen and paintbrush.

As his current show at Johnson State College suggests, Awodey has the right attitude for exposing his work to the world. “I can’t worry about critical relevance or what a viewer might read into a piece,” he declares in an artist’s statement. “Such are not for me to know.”

His artistic credo seems credible in other ways, as well, based on the evidence Awodey presents at the Dibden Center for the Arts Wings Gallery. “Although I am a figurative painter, I am primarily a formalist,” he paradoxically declares.

“Meat Triptych” makes plain what he means. These large, red-on-red canvases definitely do depict slabs of beef hanging in meat lockers. But Awodey, clearly a fan of the fauves, is more focused on exploring the properties of color than on producing a realistic rendering.

That jibes with the artist’s complementary claim that his approach is “gestural rather than specifically detailed or polished.” In “Purple Girl,” an eye popper aptly hung on the end wall of one of Dibden’s long wings, an arrangement of red and yellow blobs is easily read as a field of flowers — tulips, probably. And viewers will have no trouble discerning the title figure and her companion, a genuflecting boy, even though neither has well-defined facial features. Their physical scales are also out of balance, which is in keeping with Awodey’s assertion that “the anatomy of the picture is always more important than the anatomy of the subject.”

Indeed, his work can sometimes resemble the jokey folk art of Burlington painter dug Nap, or that of the late Stephen Huneck. That similarity is strongest here in “Shooting an Elk,” in which a comically misproportioned elk is targeted by a photographer using an old-school hooded camera.

And this is where reviewing the work of a colleague becomes delicate. I’m not a fan of folk art, faux or real, and many of the 40 paintings hanging at Dibden can be categorized that way. Awodey is good at what he does, but some viewers won’t like what he does. Even when a painting is intended to be mainly about paint and forms, looking at one anatomically unconvincing figure after another can be off-putting.

Nonetheless, a few foes of the primitivist style may appreciate Awodey’s still lifes. A suite of them hangs on the end wall of the other Dibden wing, and they exude aesthetic appeal both from far off and up close. Bottles, flowers and fruit can be roughly approximated and still look beautiful, or at least engaging; that’s a harder response to elicit with human subjects that have been made to resemble geometric objects.

Awodey has a naive style, but he’s well schooled in art, having earned a master’s in painting from the Cranbrook Academy of Art in Michigan. His art-history chops are obvious in a show full of allusions to Matisse, Munch, Degas, Redon and van Gogh.

Although Awodey’s a writer — of poetry as well as reviews — artists’ statements shouldn’t be taken as definitive of a body of work, even when they’re as smartly composed as his. Awodey claims, for example, that “narrative content is the least interesting part of painting to me.” We have to believe what he says about his own preferences, but many viewers will find considerable narrative interest in some of these paintings.

An enigmatic story is embedded in “Mother and Son,” for example. A woman in a white shawl stands on a curb beside a car in which a male figure can barely be perceived. That’s presumably her son, but why is he nearly invisible, and what is she waiting for?

“Soldiers at the Door,” perhaps the strongest — and certainly the angriest — piece in the show, shows an Iraqi family standing in the interior of their home as five soldiers batter down the door. Awodey’s bit about being a formalist figurative painter is powerfully illustrated here. The soldiers’ rifles are pointed upward and outward in a repetitive, rhythmic pattern that’s accentuated by the painting’s color fields and spatial arrangements. It’s a haunting composition, imbued with a tension that will be transmitted to anyone who sees it.