Art review: “The Body Human: Off the Wall and On,” T.W. Wood Gallery & Arts Center 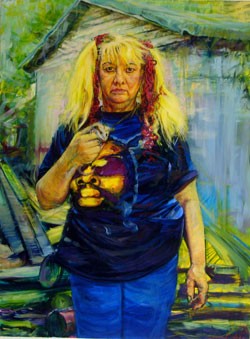 No visual-art subject has a richer history than the human form, and we seem endlessly fascinated by our outward appearance. Even a hundred years after Wassily Kandinsky championed nonobjective abstraction, figuration is all that resonates with many viewers. “The Body Human: Off the Wall and On” isn’t filled with realism, but works using the body as a point of departure do populate the show. The 22 paintings by John Hoag and sundry figurative sculptures by five other artists at T.W. Wood Gallery & Arts Center in Montpelier present the figure in many ways, from playful to melancholic.

Hoag is the show’s headliner, and he’s a brilliant figurative painter. He has a tough, uncompromising style firmly rooted in contemporary figuration. Lucian Freud is an obvious influence on the fat-laden flesh in Hoag’s works, but subtle references to Alice Neel, and to Degas’ approach to composition, also appear. While he makes obvious allusions to art history, there’s nothing derivative about Hoag’s paintings.

“Mother and Child” is a 48-by-36-inch oil with a strong triadic harmony of sickly greens, blue and a variety of yellows. Purple and red are more sparingly used in the portrait of a heavy, haggard-looking woman holding a ferret. “Birdman” is the same size, presenting a guy in a sunny tropical town carrying two large parrots. Two more birds ride on the shoulder and head of the birdman, who sports a punk-rock haircut and tattoos.

Larger-scale Hoag paintings, including a pastel self-portrait in grays, are also included. The latter has a high horizon line, and the shirtless, corpulent artist seems agitated as he sits on a small chair beside a disheveled basket of laundry.

The exhibition’s sculptures are fairly small. Sabrina Fadial fashioned steel wool into figures. Her three female nudes are playful, despite being dark colored and roughly textured. One reclines, another sits on the edge of a pedestal, and the third leans on her elbow. Proportions are abstracted, as in “primitive” figures, giving these an unrefined, organic presence.

A wall piece by James Teuscher, “Iron Icon,” is a similarly distorted male form affixed to the bottom of an iron. The iron has a mandala-like shape and a disc of copper, similar to a solar disc, at its tip. Teuscher’s “Disturbance” is a disembodied ceramic chest on a weathered iron slab. Spirals are affixed to the chest, and long, vermiculate forms trail from the hollow torso like thick veins. The image is part surrealist and part science fiction.

“Transitioning” by Georgia Landau is among the more melancholy works. The small nude ceramic lies on her side, almost in a fetal position, in the process of decomposition. There’s nothing macabre about it, any more than leaves turning colors on a maple tree are scary. The resting figure is simply beginning to dissolve into a skeleton, as if she will soon fade into nothingness.

In “Mirror Image,” Landau dredges up archetypal characters from what Lucian Freud’s grandpa Sigmund called the unconscious (although the notion of archetypes originated with Freud’s colleague Carl Jung). Landau produced two dozen ceramic figurines representing the various archetypes, like chess pieces, and placed them on a checkerboard inside a clear plastic box. On a corner of each white square, a small man stands watch.

While every art-history student is familiar with the “Venus of Willendorf,” dating from about 23,000 BC, the lesser-known “Mask of La Roche-Cotard” may be the earliest representation of a human. The “mask” is a shaped piece of flint with a bone inserted to indicate eyes. Amazingly, it’s an objet d’art produced by a Homo sapiens neanderthalensis some 10,000 years older than our Homo sapiens sapiens’ chubby little Venus. Evidently, we’ve been looking at ourselves since before we actually looked like ourselves. Yet we seem to see something new with every figure.

“The Body Human: Off the Wall and On,” paintings. T.W. Wood Gallery & Arts Center, Montpelier. Through November 13.