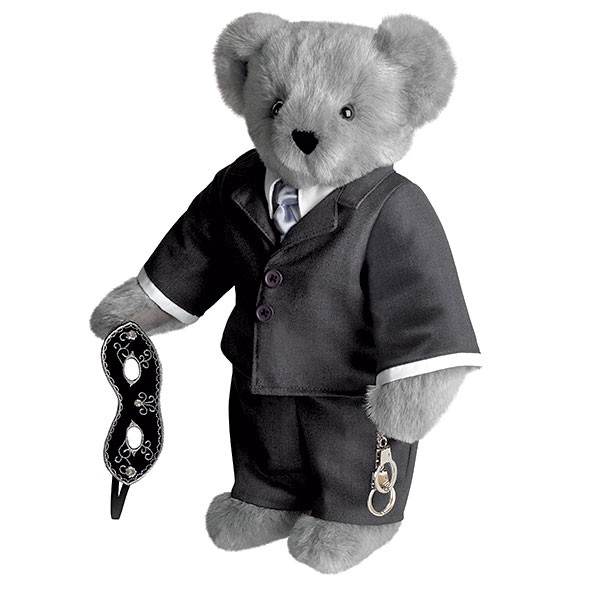 A star is born. Or, more accurately, "handmade." Vermont Teddy Bear Company has given new meaning to the words "sex toy" with a Valentine's Day offering that's getting serious love from major entertainment media outlets: the Fifty Shades of Grey bear — mask and mini handcuffs included. Think of him as the anti-Paddington. Baddington?

The hotly anticipated Fifty Shades of Grey movie won't hit theaters until Friday, February 13, but fans of the kinky E L James best-sellers can add a little Christian Grey to their lives with the click of a mouse today. Clad in a suit and satin tie, the bear has added a bit of fur to the furor surrounding the release of the screen adaptation, becoming grist for movie-industry media and social media alike.

Variety included the item in a February 3 piece profiling some of author James' more outré licensing deals (arrangements which, the publication pointed out, are rare for R-rated films). The Shelburne company's billionaire bear was spotlighted alongside tie-in products such as Red Satin and White Silk wines, blindfolds and massage oils available at Target, and Nasty Gal pajamas featuring book-related slogans such as "Laters, baby."

On February 5, the Hollywood Reporter ran a story focusing on Vermont Teddy Bear's carefully crafted appeal to adult buyers (an uncommon strategy for stuffed toys). The article's author took particular note of the website's playfully steamy copy highlighting the Christian Grey Bear's "smoldering eyes," and its appeal to Fifty Shades fans who are "obsessed with Grey, biting their lips with anticipation over the movie" and eager "to dominate Valentine's Day."

Not everyone has a crush on the plush, however. On Twitter, opinions on the fluffy 15-incher are divided. Some praise the bear as the ultimate gift for lovers of the titillating trilogy, while others accuse its creators of having gone too far. And, while no one to date has started a social-media campaign to protest the tie-in toy, the same can't be said for the film it ties into. The group #50dollarsnot50shades is encouraging people to donate $50 to a domestic violence shelter rather than see the film, on the basis of the belief that the books promote sexual exploitation.

Vermont Teddy Bear itself is no stranger to controversy. The company's colorful, attention-grabbing marketing tactics have gotten it in hot water in the past. Who can forget the Great Valentine's Backfire of 2005? Mental health groups called on the manufacturer to pull its Crazy for You Bear from the shelves, failing to see the humor in a stuffed toy dressed in a white straitjacket emblazoned with a red heart. As it turned out, the product flew off the shelves before it could be pulled from them.

So far, the fur doesn't appear to be flying over the company's latest envelope-pushing product. On the contrary, "It's sure to be one of our most popular Valentine's Day bears," CEO Bill Shouldice has predicted in the press. (The bondage bear has made headlines everywhere from USA Today to the UK's Daily Mail.) Shouldice continues: "I'll just say it: We're obsessed with Grey!"

He's not alone. Since the first installment appeared in 2011, more than 100 million copies of James' books have been sold worldwide. In 2013, Forbes named her the highest-earning author on the planet, raking in $95 million that year alone. Vermont Teddy may be far from the only business in bed with the Fifty Shades of Grey juggernaut, but, when it comes to S&M-themed teddies, it's probably safe to say it's got the market sewn up.