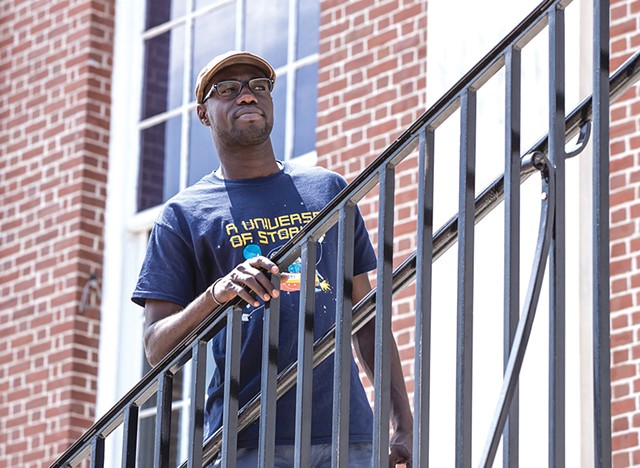 Ali Dieng knows better than most the challenges of trying to find one's place in a new city. A native of Mauritania who grew up in Senegal, Dieng arrived in Burlington in August 2008 with nothing more than a suitcase in hand. In June 2017, he won a special election to represent Ward 7 on the Burlington City Council.

Not bad for a man who, having lived in much bigger cities, admits he was underwhelmed the first time he saw the Queen City. Burlington, he says, "felt like a village."

Dieng met his now-wife, Angela Smith-Dieng, an Adirondacks native, while she was in the Peace Corps in West Africa; she attended the School for International Training in Brattleboro, which brought them to Vermont.

Dieng speaks six languages, so he's an adept communicator. Through his job at Parent University, a program within the Burlington School District, he helps parents, many of whom are New Americans, to get involved in their children's education. And, to get elected to city council, Dieng spent months talking to residents of Burlington's New North End. The Democrat/Progressive earned more than twice the votes of his nearest competitor, becoming the only nonwhite member of city council — and just the second New American ever to serve on the legislative body.

Advice for getting involved in local politics:

The first thing is, make sure you like it here and you want to call this place home. And then, whoever you are or whatever your background is, try to get to know the community and the wonderful people who live in this city. Read the local news, like Seven Days, and go to the Neighborhood Planning Assemblies. That's how you get connected.

Local nonprofits he supports or assists:

One is the Champlain Valley Office of Economic Opportunity, which serves asylees and refugees. They do good work, and I'm a board member there. Rights & Democracy is also a great organization that helps people understand local issues. They can help you get involved and get [activist] training. And the Vermont Council on World Affairs is a great organization to learn about the work that Vermonters are doing outside the state.

Ways to stay active in Burlington:

Mainly, I play a lot of soccer. There are several leagues I play in, such as the Elite 8 Soccer League. I also play in a lot of pickup games on Tuesdays and Thursdays in the South End. On Saturdays, we play in Calahan Park, and on Sundays in Oakledge Park.

In the New North End, we have two beautiful places: Maya's Kitchen & Bar is so, so good! I also like La Boca Wood Fired Pizzeria. And I like Leunig's Bistro & Café downtown, especially when family and friends come to visit me from out of town.

One that's really essential that I leave in my car all the time is a rain jacket. That's always helpful. And it doesn't matter what I do — my hands are always cold. I don't know why. So I recommend a good pair of gloves.