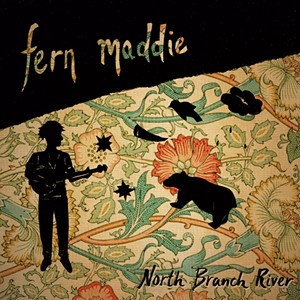 I recently coined a new genre while watching the film Blow the Man Down. The flick chronicles two bereaved sisters who get caught up in a deadly web of corruption pervading their sleepy Maine fishing village. I called it a real "noir'easter," a term that nods to the style and tone of classic film noir, the culture of the Northeast region and the fury of a nor'easter, what we New Englanders call a big-ass storm.

Batten down the hatches, people, because singer-songwriter Fern Maddie's North Branch River is a noir'easter if ever I did hear one. As a folk artist, Maddie doesn't touch on the kind of treachery showcased in most film noir. But her work does exude a tantalizingly dark mood, evoking the archetypal stoicism of settlers and pioneers who sang of hard times, the natural world and magic that hadn't yet been disproven.

Maddie is one of many Vermont-based folkies to tap producer Colin McCaffrey to bring her songs to life. (She also initially tracked with Kristina Stykos, another local legend.) McCaffrey always makes his clients' material sound beautiful, but it's evident that he and Maddie shared a particularly strong vision here. The six tunes seem to materialize from foggy shores and darkened glens, with Maddie's banjo urgently fizzing and popping throughout.

"Low and Lonesome" opens the album with an inquisitive disposition. Maddie asks a barrage of questions, as if she were amassing them to write in a letter. "Let me know just how your mind turns / Does it spark like flint and iron? / Let me know just how your skin shows / Does it shine out like the moon glows?" she sings with a sense of longing. McCaffrey's viola and Maddie's banjo meander under the songwriter's crystalline vocals.

The eeriest and most stirring piece arrives at the EP's midpoint. Tempered and initially unsettling, "Two Women" is a sinuous tale of selkies, mythical women who had the ability to change their form from human to seal or other creatures. The tune emphasizes women's deep-seated connection with nature. The ladies described in the tune effortlessly transition between human and beast, a choice they make for themselves. Maddie's harmonies with guest vocalist Colleen McNamara curl and twist together over a simple drone.

Maddie's pickin' skills come to the forefront on the EP's title track, a rollicking ditty that again finds its creator bellowing questions toward the horizon. But here, there's a sense that these inquiries ("Where did my time go? ... Where did my love go?") are rhetorical, and that she has already made peace with the answers.

Maddie's sharp instincts and clear dedication to the history and craft of her genre are striking. North Branch River establishes her as powerful new voice in Vermont's folk music scene.