Hooray! The fridge is behaving. I've never been so excited to see ice before. I'm sure if it had broken our landlord would have replaced it eventually, but that might have taken another week.

A few days ago, I cooked up some dried beans grown in North Hero, and when the fridge went out I decided to make bean salad, since the cider vinegar I'd been making seemed ready. I followed my friend Mandy's easy-as-pie, trust-in-the-beneficience-of-airborne-bacteria recipe, and just stuck half a gallon of cider in a bowl and tied several thicknesses of cheesecloth over the top. Five days later, and voila! Tangy goodness that goes well with beans. It's amazing how individually boring ingredients can become something extraordinary when mixed together. Add some cooked green beans, wax beans, onions, salt and olive oil to the yellow-eyes and vinegar, and you get this: 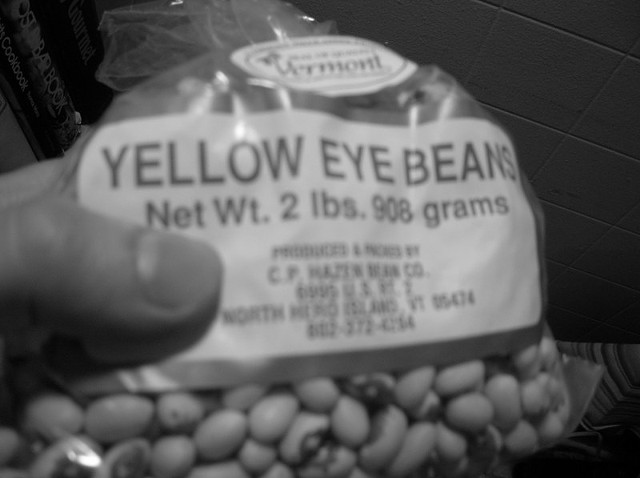 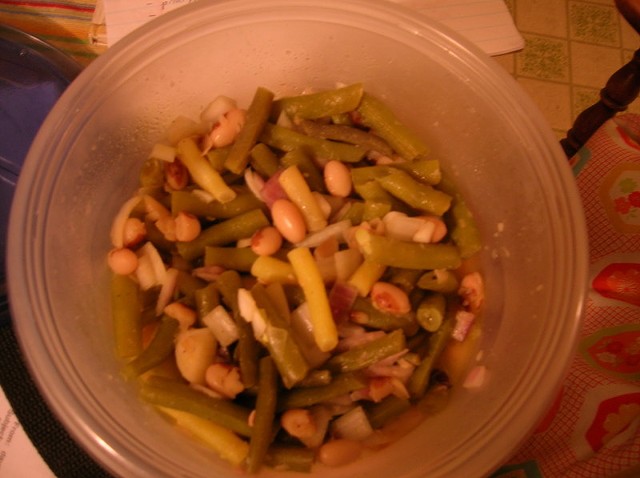 The great fridge warming caused select fruits in our big tupperware bucket o' blueberries to become mushily overripe, so I sorted through them, washed and dried the good ones, and prepped the squishy, odiferous ones to become blueberry vinegar (mushed them up further with a little bit of water). We'll see if this experiment works as well as the cider vinegar. 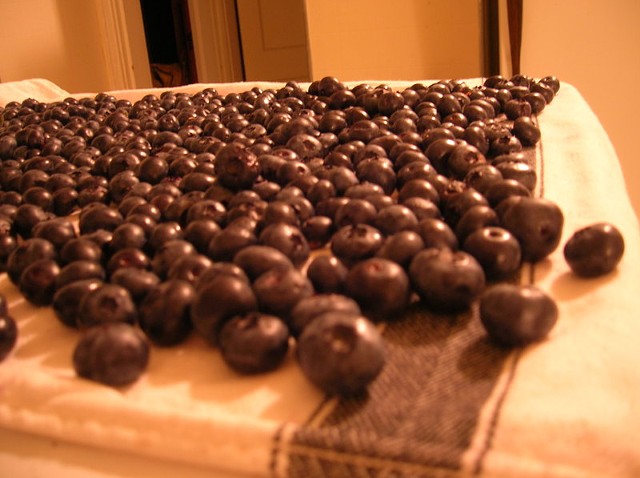 Cute vinegar crock. Aww, it looks like it's wearing a wig: 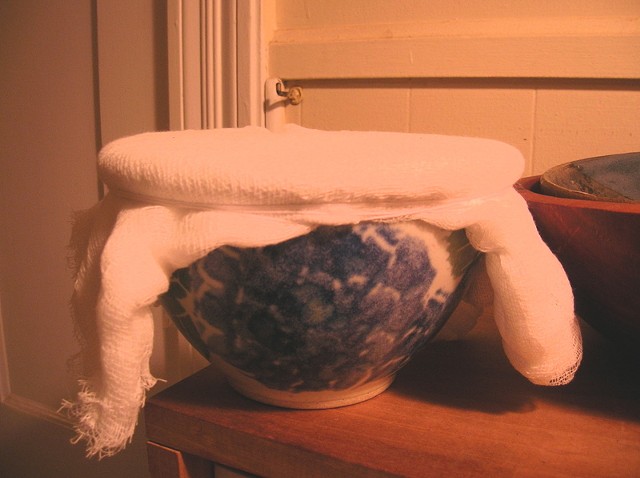 We've put in an order with other Champlain Valley Localvores to buy one special-batch loaf weekly from Red Hen Baking Co., made with locally grown flour (probably from Gleason's Organic Grains in Bridport, VT). Pickup starts on Tuesday, but I had some sourdough starter that I didn't want to die, so on Saturday I began making some whole-wheat bread with it. As of Sunday night, it looked kind of like an inflated ginger cookie: 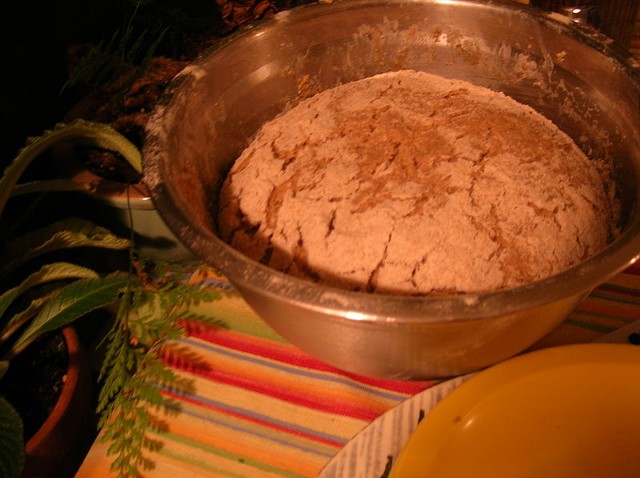 Fermentation is nifty stuff. It's pretty much letting your food prepare itself; you just have to set up the ideal conditions and know when to step in and either eat or cook the results. My friend Mandy cooks a lot from the book Wild Fermentation: The Flavor, Nutrition and Craft of Live-Culture Foods (she's using it to make Egyptian-style honey mead; more updates on that as the month progresses!). City Market is bringing the author, Sandor Ellix Katz, to the Fletcher Free Library to speak at 6 p.m. on Monday, August 28. I hope to go. I've never heard of the Fletcher Free charging admission before, so the $5 tickets must be managed by City Market.

Mandy and her boyfriend Greg hosted a family-style dinner at their apartment last night. Everyone brought either a dish or ingredients,  but they made most of it: we consumed corn chowder, superlative homemade biscuits (recipe on the Burlington localvore blog), cucumber and carrot sticks with bean dip, cornmeal crackers, spicy cabbage salad, apple pie with oatmeal crust, and maple ice cream. We also widened our circle of acquaintance with Vermont-grown-and-made vintages and spirits, but that recap deserves a separate post.

One of the great things about Localvore month so far has been the wonderful sense of community. Counting the pre-localvore leftover potluck, Gahlord and I have had dinner with between two and 12 friends four times in the past seven days. The challenge would still be worthwhile if I were doing it alone, but cooking with and/or for a group makes it much more fun. There's been lots of impromptu bartering, oats for flour, bread for yogurt, etc. I feel like we've been running our own little mini-economy.

It turns out the granola-making party is tonight, in Williston. The huge bag o' oats (grown organically just across the border in Quebec) will be whittled down bit by bit in the oven, and soon I'll have crunchy topping for my morning maple yogurt fix.