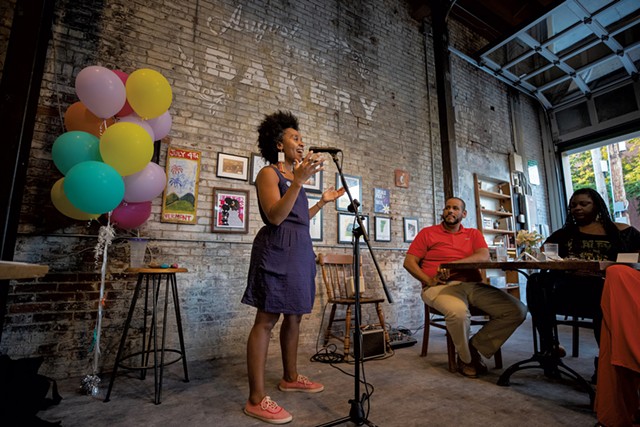 When Ferene Paris Meyer hosted her first Feed Your Soul pop-up at August First Bakery on August 1, everything came full circle. The pop-up celebrated the launch of her new business, All Heart Inspirations, which combines storytelling and food to honor community and culture.

Almost a year earlier, Paris Meyer, 38, had the conversation that set her on this new path while sitting at one of the Burlington bakery's tables.

Paris Meyer had recently taken a class on storytelling in the style of the Moth, taught by Sue Schmidt at the Flynn Center. She loved telling stories, but as the only person of color in the class, she grappled with some of the ones she wanted to tell — about the racial tension she experienced in her work at the University of Vermont, or what it means to be a Black Haitian woman in this state.

"I found myself struggling to tell my story in a way that this group of all white people could hold it tenderly and understand it, where learning wasn't happening at my expense," Paris Meyer said.

She told Schmidt she was curious about the idea of taking a storytelling class with other people of color, intentionally bringing together a group with that shared identity.

"She was so down for all of it," Paris Meyer said. "She said she would go back to the Flynn and advocate for this class, and she said, 'Ferene, you're going to teach it.'"

Paris Meyer taught the Flynn's first Storytelling Through Voices of Color class in the fall of 2019. After the first hour-and-a-half-long session, she decided to leave her job as program director for the First Year Experience at UVM's Center for Academic Success.

"I remembered all the aspects of me that I love so much: the community, storytelling, performance," Paris Meyer recounted. "And I was like, if this is the joy I felt in just an hour and a half, how can I make my narrative in Vermont be more about this?"

All Heart Inspirations was her solution, and August First was the perfect place to kick things off with a three-course meal and a storytelling performance. Twenty-four people attended the sold-out event.

"August First made an Instagram post that changed my life," Paris Meyer said, referring to the bakery's offer of its space to BIPOC entrepreneurs and community groups. Paris Meyer met with co-owner Jodi Whalen, at whose bakery she'll host pop-ups featuring Haitian cuisine and stories once a month.

"We're so excited to partner with Ferene," Whalen said. "She's incredibly talented and creative, and the work that she's doing is in line with not just our business values but our personal values. She's really spreading a lot of messages of positivity and personal growth."

Seven Days caught up with Paris Meyer on the phone last week to talk about the overlap between storytelling and food and how she's bringing her Haitian culture to Burlington through the nation's vibrant, colorful cuisine.

SEVEN DAYS: You're a culinary artist and a storyteller. Which came first?

FERENE PARIS MEYER: You know, with the event that I'm doing on Saturday at August First, this is part of the story. I had this moment of realization that all of this really started during my childhood. These two moments merged together — seeing the power that happens when I can use my voice to amplify a message, but also this desire to take things into my own hands.

When I was in the sixth grade, I ran a candy store operation on the playground at recess. Our school was near a corner store, but we weren't allowed to go during the school day — and people needed candy. So I used to hit up the store the day before, or the morning of, and I'd buy it for, like, 15 cents and sell it for a quarter. I was the candy person.

I was like, "Yo! I've been an entrepreneur since I was in the sixth grade!"

SD: And your love for storytelling started then, too?

FPM: I went to a Catholic school. In sixth grade, our class was responsible for sponsoring a mass, and my teacher asked me to do the reading. I had never read out loud in front of an audience before. I was like, "I don't know, Mrs. Welch." And she said, "Ferene, you can do this."

So I did my reading, and then I sat down; the priest goes to do his homily, and he's, like, astounded. He'd never seen that before. Because I didn't just memorize it, I said it with feeling. I said it with passion.

From there, I continued to find opportunities where I could be on a microphone or I could be in front of people, sharing. All roads lead back to sixth grade.

SD: Did you always know that food would be part of your entrepreneurial endeavors — besides the candy?

FPM: I'm Haitian American. So I grew up in a home where my parents — in particular, my dad — they were so good at having house parties for our friends and loved ones.

I remember being 4 or 5 years old; we were in, like, a two-bedroom apartment in Cambridge [Mass.] — not much room, but the energy and what we were giving to people we cared about was in abundance.

Lots of food, music 'til four in the morning, dancing. My parents didn't have a bedtime for me when those parties were happening. Kids just passed out wherever they passed out. And the parents would keep going. I think I learned so much growing up, what it meant to share food, be in community around food, to share culture.

I've lived in Vermont for over nine years now. I moved from that Haitian community that was so vibrant back in Massachusetts, and one thing I noticed right away when I got up here was that I didn't have access to my Haitian Caribbean food anymore. In Burlington and in Vermont we take a lot of pride in our food, but there are certain foods that just don't exist here, because of the lack of representation.

When I finally bought my home in the New North End — we've lived here for six years — there was something that told me, "You have arrived." I had a space where I could do all that hosting and partying, all that stuff I remembered as a kid.

When I closed on my house, my dad left a message on my phone, and I've kept that voicemail for six years. He said, "You don't have to dream anymore, because you are the dream, Ferene." I listened to it again recently; he doesn't say it's about the home — he's talking about what it means to move from dreaming into action. It aligns so beautifully with what All Heart Inspirations is.

SD: How does food fit together with your storytelling?

FPM: Storytelling can be done in so many different ways. I appreciate performance-based storytelling. But something that always just naturally happened when people would come to our home was all the amazing conversations we would have around food. You know?

The potlucks I host now at my house are where I've had the best food in Vermont. It hasn't been at a restaurant; it's been my friends sharing dishes that connect back to their culture. As I curated this menu [for the launch], I got to go back and really reflect on the foods that I enjoy cooking from my Haitian culture. I feel like I've been able to reframe a lot of things about what it means to be a Black woman, a Haitian woman, living in Vermont — where sometimes I felt like the only.

SD: How do you describe Haitian cuisine to someone who's never tried it?

FPM: So Haitian food, first and foremost, is a labor of love. Typically, traditionally, people are cooking all day the day before. Seasoning your meats for multiple days, wanting to make sure all those spices really soak in. It's filled with so much flavor and lots of color.

The pikliz that I make, for example, that spicy Haitian slaw — I'm cutting everything by hand. Each pepper, each cabbage. And as I'm putting it together, there's such a rainbow effect.

When you think about the Haitian culture, that whole vibe of who we are as Haitians, it's a party. It's a party in the music, the food. When that food goes into your mouth, I really want it to make you want to dance. As it's moving through your palate and it's soaking into your system, I literally want you to shimmy in your seat.

SD: You were selling jars of pikliz through Instagram for a while — are you still doing that?

FPM: I'm trying to figure out how to get Fifi's Pikliz out in the community. I'd love to get it into stores to make it accessible to people; I've just been doing it very grassroots.

It's not your basic coleslaw — there's some spice to it — but it's the best condiment. As long as you like a little bit of spice in your life, you're going to have a good relationship with this product. Whenever you're trying to add a little more vibe to your food, or energy and color to your plate, this is the jar to do it.

SD: How does sharing pikliz and other Haitian cuisine help you tell your story to the community — especially being in a place where that culture is underrepresented?

FPM: I invite people to know me as a Haitian woman, more than just the food. Because the food is just a part of me; we have to do work around learning the culture that made the food and what their history is.

You know, I was really intentional on my website. The whole menu [for the pop-up] is in Creole: bannan peze ak pikliz, makawoni au graten, poule en sós Kreyol.

I want people to have more of an awareness, to be better about supporting different things and to lift up food narratives that don't always get the spotlight here in Vermont. There are so many amazing restaurants in Vermont, but so many of the menus are doing the same thing. There are other foods that mean a lot to people, to their identity, and it's not easy to access that.