Feeding Frenzy: The Baby Formula Shortage Has Eased — but It Isn't Over 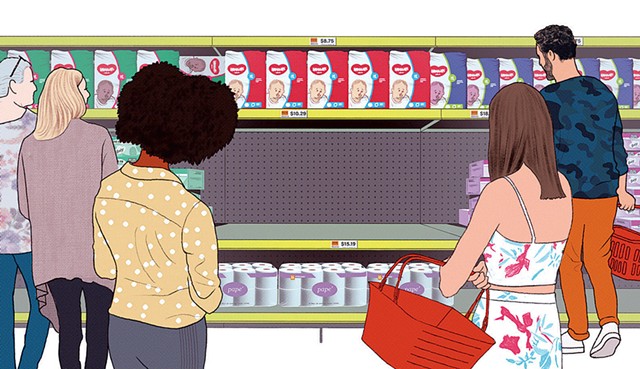 Baby formula — or lack of it — made lots of headlines in the spring, when parents of infants were encountering purchasing restrictions and bare shelves at grocery stores. The nationwide shortage was spurred by the February shutdown of an Abbott Nutrition formula factory in Sturgis, Mich., due to suspected bacterial contamination. Abbott, the maker of Similac, is one of just four companies that control around 90 percent of the national infant formula market. And it's a big market — three-quarters of American babies rely on formula for part of their diet.

In an attempt to improve the situation, President Joe Biden launched Operation Fly Formula in late May to allow the U.S. to import formula that meets Food & Drug Administration standards from other countries. Abbott's Michigan plant finally reopened in July.

However, "the formula shortage is still very much alive," according to Amy Wenger, a maternal and child health nurse who is co-executive director of the Vermont Donor Milk Center in Essex Junction. The center supplies pasteurized breast milk to local families.

The issue is especially pronounced for those looking for specialty formula and for low-income families who purchase formula through the U.S. Department of Agriculture's Special Supplemental Nutrition Program for Women, Infants and Children, commonly known as WIC. Members of the latter group are only allowed to buy formula at authorized stores, giving them less purchasing flexibility.

The Vermont Donor Milk Center saw a huge increase in calls from pregnant and postpartum women searching for supplementary milk when the formula shortage hit this spring, Wenger said. She's also seen an uptick in local women looking to help by donating their oversupply of breast milk to the center. Private Facebook groups aimed at helping Vermont families find formula locally have also sprung up.

This summer, sales are steady at the donor milk center. A $50,000 allocation from the state legislature has allowed the center to offer a discount to low-income Vermonters. Wenger said she's looking forward to the next legislative session, when a bill that would require insurance coverage for donor milk will likely be debated.

— Learn more about the donor milk center — and how to receive or donate breast milk — at vtdonormilk.com.

'Every day I would have to call Costco'

Vermont parents who rely on infant formula have had to get creative in order to feed their kids. In early June, Kids VT and Seven Days marketing and events director Corey Barrows, mom of then-9-month-old Harrison, sent an email enlisting the entire office to help in her search for formula. "If you happen to be at Costco and notice they have some, can you please let me know?" she wrote. "If you're feeling extra ambitious, grab it and I'll Venmo you. You're only allowed two at a time. It's in the back corner where the paper towels and toilet paper are. Harrison and I thank you." She agreed to share her formula-finding methods with our readers.

Corey Barrows: He has always been formula fed — no part of me ever wanted to breastfeed. We started off with Kirkland — Costco's formula — because we live near Costco and it seemed like the most cost-effective option for us. Plus, that's where we get our diapers and wipes, so we could get everything all at once.

KVT: In the fall and winter, you had no problem getting formula, right?

CB: Yes, it was always on the shelves. I could get as many containers as I wanted. And then, one time, I went to the self-checkout line in Costco and I tried to buy three containers. I kept getting an error message, and then a person came over and said, "Oh, you can only buy two at a time right now." My parents in Rhode Island had been texting me — "Are you having trouble getting formula?" — but it was months before things got panicky here. I think Costco might have limited purchases preemptively.

KVT: And things really got worse later in the spring, right?

CB: Yes, it wasn't a problem, and then all of a sudden, it just felt like, Boom! It hit. And every time I went to Costco, there was no formula. When I would ask customer service, "Do you know when you're expecting another delivery?," they would always say, "No. We recommend that you call daily to see when it's in." So every day I would have to call Costco to see if they had it. There was one time where we ran out of the Costco formula, so we had to start buying it at other places, and it was always slim pickings. There was always something there, but the options on the grocery store shelves were often small containers that were way more expensive — like, four times more expensive per ounce — than the Kirkland brand.

KVT: Did things eventually get better?

CB: One of the other parents at daycare, whose son was over 1 year old, had formula left over, so she gave that to us. And then I went to Target, and their limit was four. In terms of price, the Target brand was better than the grocery store, but not as good as Costco. So, I got four there. The next day, my friend called me and told me Costco had formula, and I ran over there and got two. So we were stocked up.

At that point, my husband, Derek, said to me, "I didn't realize how stressed out I was until now, when we don't have to worry about it for a little while."

CB: Yes, there was this one time where my friend texted me and said Costco had formula that day. For some reason, the line at Costco was from the register all the way back to the produce section. I was waiting in line with three formulas, and I wasn't sure if they were only allowing people to buy two. The woman behind me, who had older kids, offered to buy my third one. I Venmoed her for it, then we exchanged the formula in the parking lot. It felt sneaky and wrong, but it got us through a few more days.

KVT: As a new mom, how do you feel about this whole situation?

CB: I never thought this would be a problem. Now that Harrison is eating more regular foods and not taking as many bottles — and you can give babies cow's milk at 1 year old — we won't have to worry about this for much longer. As a new parent, you already feel scattered and like a lot is out of your control, and having to add one more thing — like calling Costco every day or constantly looking for formula — it's stressful.