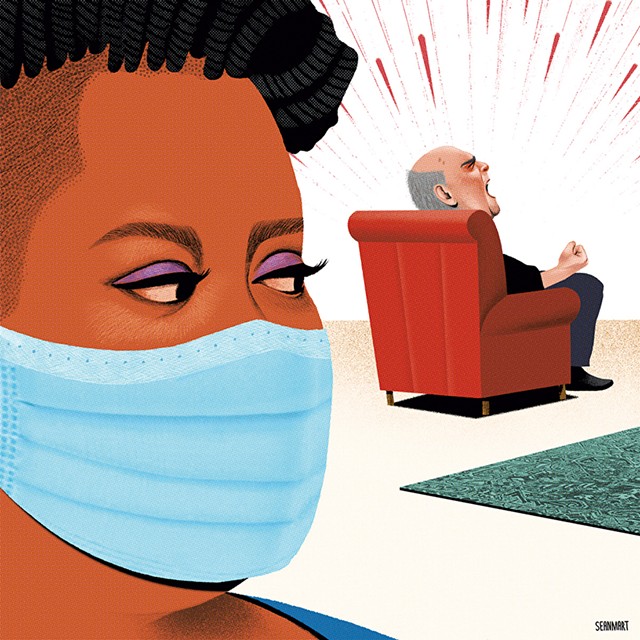 A federal civil rights agency is suing one of Vermont's largest nursing homes after concluding that Elderwood at Burlington subjected Black nurses and caregivers to "pervasive" racial harassment by a resident.

Black Staff Say Burlington Nursing Home Failed to Protect Them From Abuse
By Paul Heintz
Health Care
The allegations date back to March 2020; they were detailed in a Seven Days story later that year. But Elderwood has still not done right by the employees or taken steps to prevent similarly hostile work environments for Black people, the EEOC's complaint alleges.


Asked about the suit, the home provided a written statement from spokesperson Chuck Hayes. "While we cannot comment on ongoing legal matters, we strongly emphasize that Elderwood at Burlington does not tolerate harassment of any kind, and prides itself on promoting a culture of diversity and inclusion," it reads in part.

The problems stemmed from several residents who frequently hurled racial slurs at the employees, but the lawsuit focuses on a single "white male resident."

The man told several of the employees to "go back to Africa" and said he wished he could "hang" or shoot them, the commission found. At other times, he punched, smacked and poked nursing assistants while yelling racial epithets, and hit another with his walker. He sometimes followed them around the unit as they worked.

In a press release, Timothy Riera, the EEOC's acting director of the New York district office, said Elderwood had a duty to protect the employees from harassment by residents.

"This har­assment was especially grotesque, and should have been addressed quickly but was allowed to continue," he said.

The EEOC found that Elderwood managers — including a director of nursing, nurse supervisors and unit managers — witnessed much of the behavior. The supervisors also fielded complaints from the employees, as did the head of human resources.

But managers told the employees that the resident had a "right" to say those things, the complaint alleges, while a director of nursing is alleged to have told one of the Black nurses that she should "be used to" hearing racial slurs because she was "from the South."

The lawsuit cites a Seven Days article published in October 2020 describing the employees' allegations as further evidence that managers were aware of the problem. "I have never experienced the type of racism that I am experiencing at Elderwood at Burlington," the article quoted one nurse as saying.

Prior to the Seven Days story, the lawsuit alleges, Elderwood's "sole effort" to address the harassment consisted of two attempts to transfer the male resident to other long-term care homes. The transfers did not take place.

After the story was published, Elderwood officials met with the commissioner of the Vermont Department of Disabilities, Aging and Independent Living to "discuss the fallout" from the article, and made further unsuccessful attempts to transfer the male resident, the EEOC complaint states.

As a result, the agency says the racial harassment continued "unabated" until each of the Black employees left Elderwood.

Six employees filed complaints with the federal commission, according to the lawsuit. Following an investigation, the commission in March found "reasonable cause" to conclude that Elderwood violated federal law barring racial discrimination at work. But the commission and Elderwood's corporate owners were unable to come to a "conciliation agreement" to resolve the cases.

The EEOC then filed the civil complaint in U.S. District Court in Vermont.

Its lawsuit characterizes Elderwood's practices as "intentional," "malicious" and "reckless"  with regard to the Black employees' rights.

The EEOC is seeking an order requiring Elderwood to take steps to ensure equal opportunity for Black employees and "eradicate the effects of its past and present" practices.

The lawsuit also seeks compensation for the employees, including punitive damages.

The 150-bed New North End facility was known as Starr Farm until January 2019, when it was acquired by Elderwood, a regional nursing home chain owned by New York City-based Post Acute Partners.