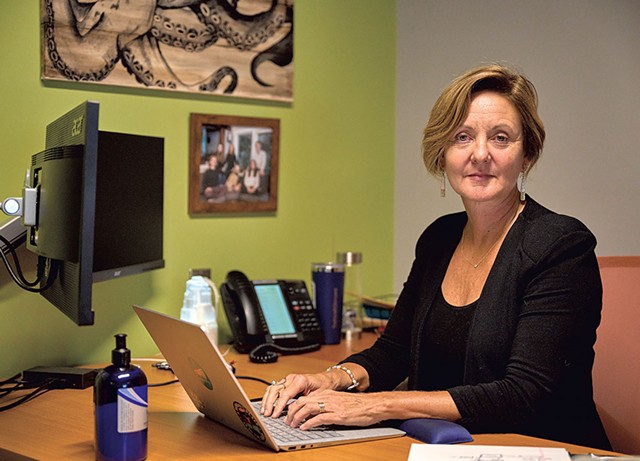 Lisa Groeneveld was 20 years old when Winooski River floodwaters swamped her parents' cobbler shop in Montpelier in 1992. Nearly all the inventory was destroyed; she saw tears in her father's eyes, a memory that haunts her.

But Groeneveld, a Barre native who owns the fast-growing OnLogic computer hardware company in South Burlington, was also moved by how quickly strangers appeared bearing tools, doughnuts and offers of assistance. They stayed for as long as it took to help her parents get back on their feet.

Now that Vermont is facing another crisis, Groeneveld views getting vaccinated against COVID-19 as similar to the actions of those long-ago volunteers: as an opportunity for community members to help one another recover from a disaster. Groeneveld said she wishes that everyone would decide on their own to get their shots, in the interest of helping the community recover from the pandemic. But she's realistic about holdouts: OnLogic required that its 160 U.S. employees be vaccinated by August 23.

"We were probably one of the first organizations in our industry to say, 'Listen, this is what we're doing, not just for ourselves but for our neighbors,'" she said.

OnLogic may soon have plenty of company. Last Thursday, the White House issued a "Path Out of the Pandemic" plan that requires companies with 100 or more employees to make sure workers are vaccinated or tested weekly. The plan also requires vaccinations for millions of federal workers and contractors.

"We did have about 15 employees get vaccinated as a result of us saying, 'You have to do this.'" Michele Asch tweet this

The measure hasn't gone into effect yet. The Occupational Safety and Health Administration is working on a rule that covers it, and court challenges are widely anticipated.

Vermont has about 350 private firms with 100 or more employees, according to the Vermont Department of Labor. That's just 1.5 percent of its private companies, but they comprise 44.7 percent of the state's private-sector employment, said the labor department's chief economist, Mat Barewicz. Vermont Chamber of Commerce president Betsy Bishop said her group supports the White House order, seeing it as a "natural next step."

The idea of requiring vaccinations started to gain energy in midsummer as the Delta variant sent COVID-19 infection rates soaring throughout the country. Vermont consistently ranks first in the country for its immunization rate — now at 77.8 percent fully vaccinated among those 12 and older — and Gov. Phil Scott's administration has made vaccines the centerpiece of its recovery strategy, setting up dozens of free clinics around the state.

Employers and institutions have followed suit: Most of Vermont's colleges and universities require students to be vaccinated. And, starting on October 1, the University of Vermont Health Network's 7,000 employees must be vaccinated or take weekly COVID-19 tests.

Scott has said repeatedly that closing the vaccination gap is the best path to recovery, and earlier this month he announced that about 8,000 state government employees would be required to get the shots. Those who don't must wear masks on the job and undergo weekly testing.

Shortly after President Joe Biden announced the federal vaccination mandate, Scott tweeted his support, writing that he appreciates "the President's continued prioritization of vaccination and the country's recovery as we move forward."

The governor has been encouraging private businesses of all sizes to mandate vaccines, said his spokesperson, Jason Maulucci.

Mask-related mandates have sparked outrage and even violence in some states, and Vermont has had its share of minor confrontations, too. All but one of the state's school districts require masks indoors. But the vaccination mandate for businesses is new.

"This plan will ensure that we are using every available tool to combat COVID-19 and save even more lives in the months ahead, while also keeping schools open and safe, and protecting our economy from lockdowns and damage," the White House said.

Like OnLogic, Twincraft Skincare, which employs about 300 people, is already there. The Winooski-based soap and lotion maker started requiring the shots on August 23. Everyone at the company must show their vaccination card, and anyone who can't or won't has to wear a mask at work.

"We did have about 15 employees get vaccinated as a result of us saying, 'You have to do this," Asch said.

As for the White House mandate, "I'm not surprised, and I agree with it," said Asch. The rise of the Delta variant, she pointed out, has caused supply chain disruptions and strained the health care system.

Asch noted that in harder-hit states, some hospitals have had to refuse patients because they are full. Vaccination, she said, is "just something we have to do."

"After that announcement, one [employee] moved on," copresident Duane Peterson said. About half a dozen employees used an on-site vaccination clinic to get their shots and keep their jobs, he added.

Many Vermont business leaders have said it's too soon to know what impact the White House mandate will have. Nationally and in Vermont, more than 95 percent of all businesses have fewer than 100 employees and won't be affected. Board members for Vermont Businesses for Social Responsibility, a nonprofit business trade organization, were planning to meet this week to come up with policy recommendations on masks and vaccines for state leaders, said executive director Roxanne Vought.

"I like to allow my folks to have their privacy, and I don't push into the details of their personal lives. I just think that's good business." TJ kingsbury tweet this

"My employees tend to be more conservative, and they like to have their rights," Kingsbury said. He's vaccinated, he said, but "I like to allow my folks to have their privacy, and I don't push into the details of their personal lives. I just think that's good business."

If workers quit their jobs rather than get vaccinated or tested weekly, Kingsbury added, employers will suffer. The construction industry has had trouble finding workers for years, and he said a shortage of truck drivers has worsened significantly in the last 18 months.

"It's one more credential that an employee has to go out and get so I can employ them," he said.

Some workers did leave OnLogic as a result of that company's mandate, Groeneveld said. The company doesn't require proof of vaccination.

"Any employees who weren't going to get the vaccine for medical purposes or firmly held faith reasons were open and up front about that, so we could take that into consideration," she said. "And then anyone else on the team who decided not to be vaccinated for other reasons, we had a very different kind of conversation with those folks."

Asch is not worried that the Twincraft mandate will deter job applicants. And she said it's OK if it does. Her primary concern is getting out of the pandemic.

"We have a healthy culture; we're a growing manufacturer, and people are well compensated with benefits," she said. "We want to employ folks who want to help take care of each other."

Kingsbury, too, said it's critical that something change.

"We're never going to get out ahead of this pandemic if we don't get more creative," he said. But he stopped short of saying vaccinations are the solution.

"I know there is a large group of folks claiming the unvaccinated population are the ones who are spreading this," he said. "I'm not a doctor. I don't know the science well enough to comment. That could very well be the truth."

But employers shouldn't have to enforce public health rules, he said.

"I don't like being put in that position," he said. "I don't think that is our duty."

Groeneveld, though, thinks it's her duty — and the duty of each Vermonter.

"You don't drive past your neighbor [stuck] in the snowbank," she said. To her, refusing to get the vaccine is a decision not to help. "Why would you just drive on by? Personally, I am flummoxed."

The original print version of this article was headlined "Dividing Line"