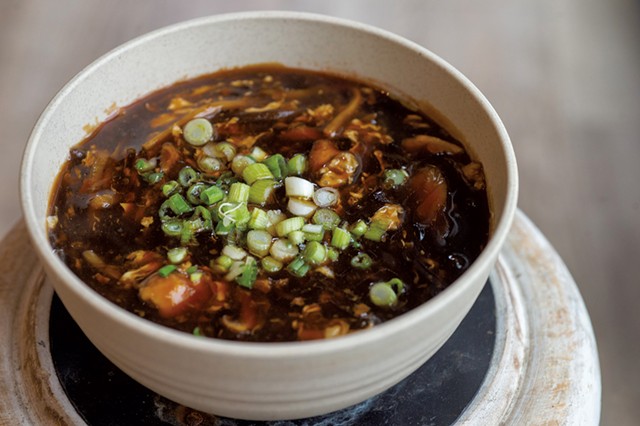 On a Friday afternoon in late October, I emailed Steve Bogart: "Are you willing to risk a little rain on our food to meet at 5 Saturday for an Umami picnic in Stowe?"

Bogart, now retired, was the founding chef-owner of A Single Pebble, a Chinese restaurant in Burlington that he started as a weekend pop-up in Plainfield in 1995. To my dinner inquiry, Bogart replied yes, that would work.

He offered his van — with its pandemic-approved eight feet of space from front seat to back — as a dining room if the weather was too lousy to eat outside. He asked if I wanted him to order our food at Umami, an Asian takeout spot that opened on Main Street in Stowe in early September.

"Would love it if you order!" I wrote back.

The rain held off, but the sky was a gloomy gray and the evening air chilly when we met outside Umami. The tall grasses in the park down the hill from the restaurant were dead, the trees bare. As we carried two bags of food to one of the picnic tables — all three were empty — I remarked, "It's a funny time for a picnic."

We had each driven about 40 miles for the meal. Bogart, 72, traveled from Worcester, where he's lived for 50 years. I came from Burlington.

The last time I'd seen him was more than a dozen years ago, when it was OK to hang out in a walk-in refrigerator with someone you barely knew. That day in his Burlington cooler, he told me about the ducks hanging there and smoking over jasmine tea and hickory chips. 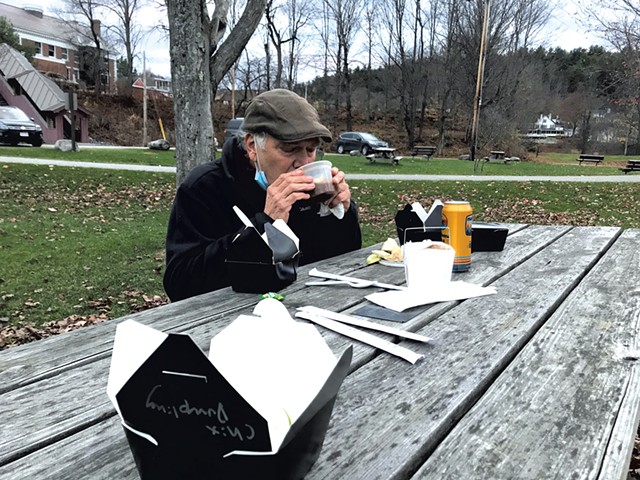 In Stowe, eating in an open-air refrigerator, we talked about cooking with a wok. (It's properly seasoned, he told me, "by the time you throw it away" — after four or five weeks of heavy, high-heat restaurant use.) We discussed hot-and-sour soup, pork belly, and rice noodles — all part of the Umami takeout on the picnic table. We drank soup from the containers and beer from 16-ounce cans of Madonna, a double IPA from Zero Gravity Craft Brewery, that I had brought from home.

A renowned chef of classical Chinese cuisine, Bogart had special insight into the meal. The chef team at Umami includes two people, Silas Tanner and Dusty Berard, who trained and worked with Bogart at A Single Pebble. His son, Chris Bogart, a chef based in Portland, Ore., consulted with and cooked briefly at Umami on an extended visit to Vermont.

He described himself in a similar manner: "I never made up a single dish. Every recipe I used had a real long history. I often would say I'm just a copycat."

I was intrigued to learn from Bogart that our excellent hot-and-sour soup is made to order in the wok. The deeply flavorful and rich, almost stew-like soup is packed with pork, shrimp, chicken, tofu, mushrooms, lily buds, mung bean sprouts, bamboo shoots and spring onions. The base is chicken stock, made daily and kept hot on the stove.

The ingredients are sliced so finely, and the wok burns so hot, that the soup cooks in about 45 seconds. When the soup is ready, it's poured into a quart container over red and black vinegar and white pepper, a method that keeps the flavors vibrant.

Our meal included wonderful chow fun with shrimp, and bao with braised pork belly. Eating the housemade rice noodles in the chow fun is like "swallowing clouds," Bogart described. Pork belly, he told me, is difficult to do right. "You want the fat to be almost gelatinous," he said. "Dusty's a master at pork belly."

I was especially pleased to eat Bogart's namesake — Admiral Steve's Chicken — with him. Cooked in a sauce that contains four types of soy sauce, along with sesame oil, vinegar, sugar, ginger, and roasted and fresh garlic, the crispy chicken is served with steamed broccoli.

"It's an honor," Bogart said of having a dish named for him.

A duck hanging in a walk-in refrigerator makes for interesting conversation, but Bogart can top it. Over dinner, I learned that his late father, Larry Bogart, was an early and influential activist in the anti-nuclear-power movement. I also learned that before Bogart was a chef he was an arborist.

At Umami, the cooking line is abuzz with life and energy. When Bogart saw the string of tickets waiting to be filled, he said he shuddered.

The restaurant's owners are Aaron and Jennifer Martin, who also own Plate, another Main Street restaurant. Chef Tanner, 47, former sous chef at Plate, is a partner in Umami.

Aaron Martin, 36, grew up in Hyde Park. He recalled eating at A Single Pebble in Berlin with his father, who was then a chef in Stowe, when he was a kid.

"I'd go back into the kitchen and watch those woks rip and roar," he said.

Martin started his restaurant career as a dishwasher at the Alchemist Pub and Brewery in Waterbury, later moving on to prep cook and sous chef. But he decided he wasn't ready to be a sous chef and left that position for a job making salads at Hen of the Wood in Waterbury, Martin said.

He stayed for two and a half years. In that time, he said he learned a lot about cooking from chef-owner Eric Warnstedt. Martin continued his culinary education working for his father, Keith Martin, at Stowe's Harvest Market. Now, he's learning how to cook in a wok from his team at Umami. He called the experience "humbling."

"The first time I flipped the chow fun, I was wearing the food that was in the wok," Martin said. "It comes back at you because of the shape of the pan."

The Martins decided in the spring that they wanted to open a takeout business, a model suited to a pandemic. They thought about a lobster shack or a "picnic plate," Martin said, given the site's location by the Stowe Recreation Path.

"All of a sudden, we were talking about this [Asian] style of food," he recalled, adding that nothing travels better than Chinese food.

"You let the people who you hire do what they do best," Martin continued. "And these guys are passionate about Chinese food, and they do it really well."

On the phone a few days after our meal in the park, Tanner told me that he appreciates the straightforward setup at Umami. A dining room was never particularly important to him and can feel "extraneous."

"We built this engine in this room just to pump out food, and I love that aspect of it," Tanner said.

In another phone call, Berard, who first cooked with Bogart when he was a teenager, called the older chef his mentor and described his own approach to Umami.

"I want to make sure we're not a cover band," Berard said. "We're taking a base knowledge and expanding on it from there."

That Saturday evening in Stowe, after our picnic, I walked up the hill to Umami — an "engine" of culinary activity — and watched the action for a few minutes.

Chicken dumplings were steaming in a big steamer on one stove. Martin asked Berard to check something he was cooking. Tanner, down the line, was manning a wok. The phone rang for another order. I ducked out, after realizing too late it was the exact wrong time to ask Berard about bao buns. (Double leavening, he took the time to explain.)

The next morning, I got an email from Bogart.

"I thought Silas and Dusty are doing a great job," he wrote. "I think this is my 4th meal there and [it] gets a little better each time."