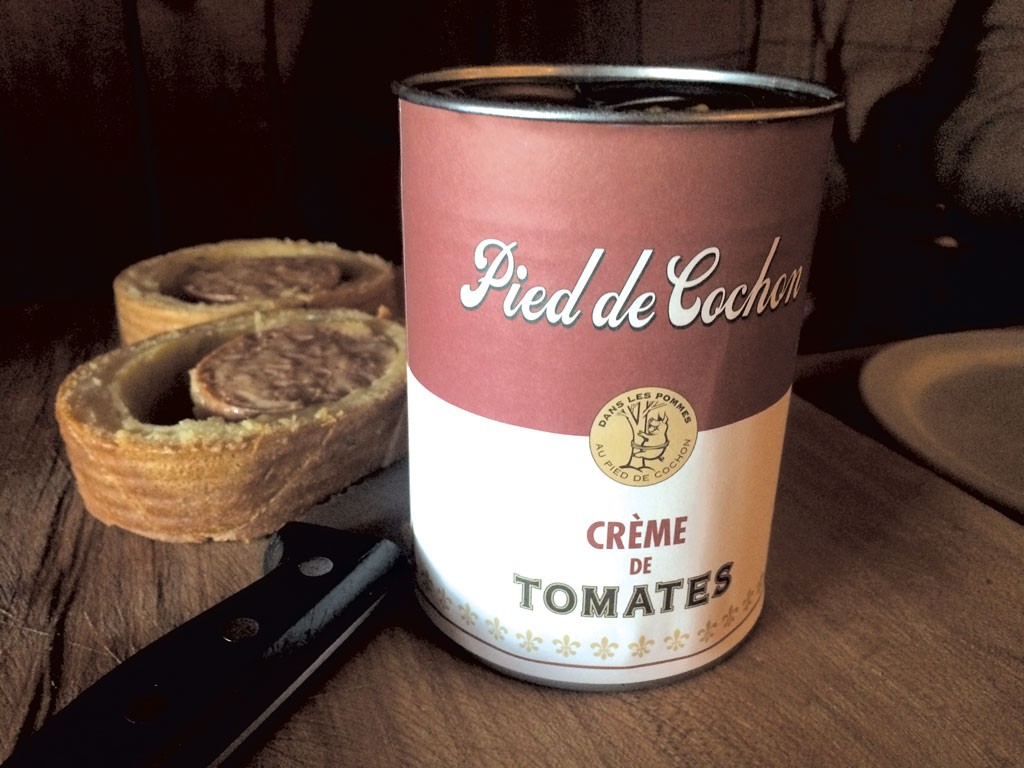 Envy the pleasingly plump feral cats who haunt the woodpiles and puddles around Cabane à Sucre au Pied de Cochon in Mirabel, Québec. They don't have to wait months for a reservation at the small-town spin-off of chef Martin Picard's celebrated Montréal restaurant. They live there.

I, by contrast, had to watch Twitter assiduously to see when the sugar shack would begin to take reservations for its autumn apple dinner. It happened one day in the beginning of April, and though I got an email on May 20 confirming that I'd be permitted to sit at the Cabane's bar on October 5 at 2:30 p.m., that reservation was changed on me twice in September. The web address for making reservations is aptly titled hahaha.com — ha ha ha, indeed!

I'm the kind of eater who won't wait in line for anything. This probably comes from my grandfather, who was known to call restaurants ahead and insist the food be waiting for him when he arrived. If it wasn't, he'd bang his knife and fork until it was. He was a terrible person.

Given my similar type-A leanings, why was I willing to put up with this crap? Simple: the Au Pied de Cochon connection.

The Montréal landmark and its chef are synonymous with the reinvention of the city as a culinary destination and with a broader reevaluation of Québecois food among the world's snootiest gourmets. Since 2001, Au Pied de Cochon has drawn eaters from all over the world to experience Picard's trademark duck in a can, and the now-almost-hackneyed foie gras poutine.

Picard's sugar shack, the Cabane, which opened in 2009, serves for just three months at a time in the spring and fall. Yet it's proved so popular that it spawned a Québecois TV show, "Un Chef à la Cabane." Of course, that kind of fame only makes it harder to score a seat. 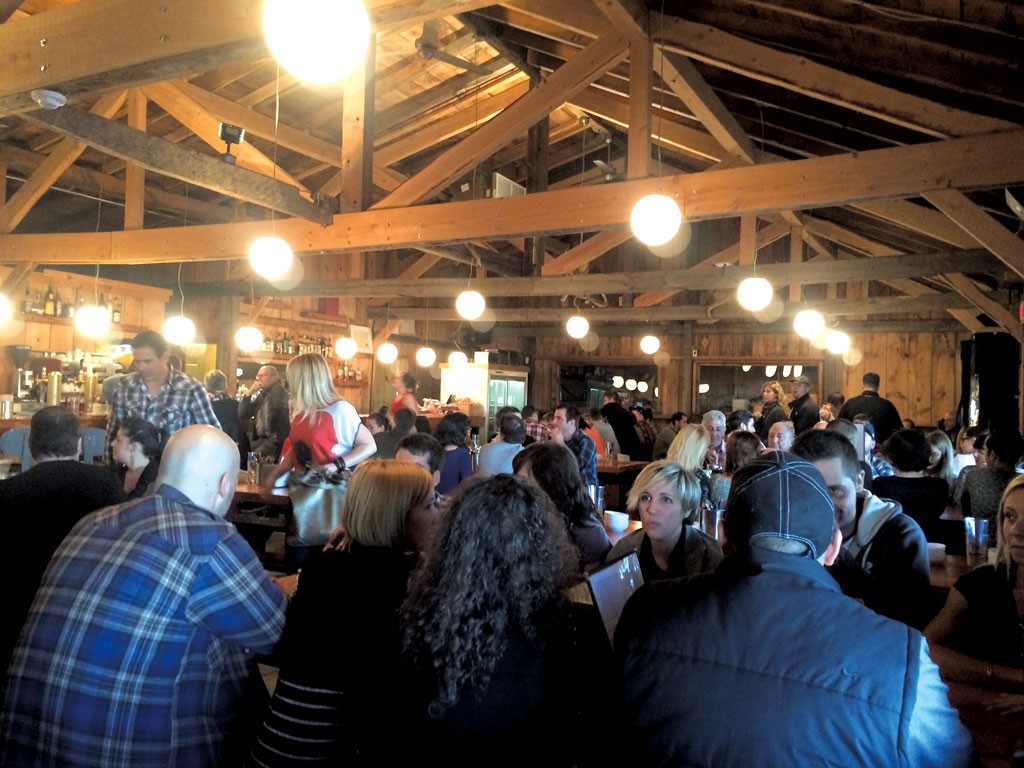 Viewers of Anthony Bourdain's show "The Layover" may remember when chef Picard got so drunk at Montréal watering hole Big in Japan that he had to be transported, unconscious in the back of a truck, from the scene of the crime. Not exactly a shining moment, but it tells you everything about the man's devotion to excess.

At Cabane, I was seeking a blinding wallop of offal and fat, and I wanted to eat it right where it was grown. Would it make for an even more intense experience than visiting the celebrated Montréal restaurant? Rumor has it that Picard occasionally feeds the 50 or so pigs that wander his country property the maple syrup that's also produced on his hilly farm. That attention to excess seemed like an important lesson to take back to Vermont. But first I had to taste its manifestation in the food.

The two-and-a-half-hour drive went quickly, taking me through Montréal into the rural towns to its northwest. The leaves were disappointingly pallid for most of the half-hour trek past the city. But as we turned onto rang de la Fresnière, trees started displaying jewel-toned reds and oranges to compete with the sickly yellows.

I didn't have much time for leaf peeping once I arrived — I was busy petting the cats, then gawking at the restaurant's giant smoker filled with Moroccan tajines and braided sausages. I found even more intrigue inside the log cabin, which was a Renaissance-themed restaurant before Picard took over.

Stepping into the sugar shack felt like entering a cabinet of curiosity for carnivores. Beams overhead held taxidermied coyotes frozen in howling, chop-licking poses. A glass window behind the bar revealed hanging cuts of blood-red flesh beyond. Above it, a giant painting depicted a pig-faced woman lactating into a pair of sap buckets. The badass, cheffy ambience nudged out the classic sugar-shack feel, but there was plenty of the latter, too.

Seated at a table for 12, my party of two got a separate English-language spiel. We learned there would be six appetizers, three entrées and five desserts. Though the fall meal is billed as an "apple-season dinner," the real focus is the harvest. While winter brings maple-drowned lobes of foie gras to the Cabane, we were told to expect vegetables.

The meal started with Picard's version thereof. Tomato soup arrived hot, in a giant can branded with a stylized take on the classic Campbell's logo. Our server busted in with a can opener, and we were invited to pour the soup ourselves. Larger parties also received a second can, from which emerged a puff of pastry containing a fat, homemade sausage with the unctuous taste and texture of a Nathan's Famous hot dog. We sampled it in slices. The meat was baked with a slather of Le Migneron de Charlevoix cheese cooked both en croute and en boîte, with spiral indentations to prove it.

Oysters emerged from the kitchen nestled in a floppy bed of kelp. Their pastry crusts were crowned with thumb-size nubs of foie gras. Inside the crust, creamed corn gave earthy sweetness to the briny cooked oyster. I paired mine with a big mug of cider filled with tiny blueberries, which bobbed and floated through the light carbonation as if they were suspended in a bottle of Orbitz.

OK, so creamed corn and tomato soup count as vegetables about as much as freedom fries do. But with the next dishes, Picard and chef de cuisine Vincent Dion-Lavallée surprised me. The Montréal restaurant and sugar shack are both internationally known for modern Québécois cuisine. But those dudes can throw down Asian-style, too.

A dish of chubby homemade noodles and tofu made broccoli the star with an umami assault. Vietnamese-style rice-paper spring rolls, mostly filled with vermicelli, got their flavor from lettuce, carrots and radishes dressed in a tangy peanut sauce. The single thin layer of raw beef inside was an unnecessary afterthought.

My butchering Obi-Wan, Cole Ward, has always told me not to eat brain because it harbors the most dangerous transmittable diseases. But I made an exception for Picard's next surprise, a witty stunt dish. Deep-fried calves' brains, crisp and slightly musky, arrived over a tender head of brain-like cauliflower. If not for the rich cauliflower cream sauce beneath, the whole thing might have been mistaken for a prop at a hipster Halloween party. But the cream and crunchy brain fritters prevailed.

Amid Picard's twists on hearty blue-collar fare, squid-ink cannelloni were a welcome surprise. Filled with a cloud of swordfish mousse and topped with a whole branch of basil, buttery bread crumbs and an intense, multi-herb pesto, the pasta showed off the kitchen's skill with haute cuisine. It was impressive, but felt at odds with the elbows-on-the-table offerings.

All these were just the appetizers, sized like exceptionally generous small plates. We greeted the entrées with a mix of glee and horror. In line with Picard's gluttonous style, each could have served two at a normal restaurant. But Au Pied de Cochon is not normal, and sugar shacks are even less so. The forced indulgence made me feel like I was being farmed into foie gras myself — but I couldn't stop. Luckily, our server brought each party multiple take-home containers, no doubt realizing that even a lumberjack would have been felled by this onslaught. 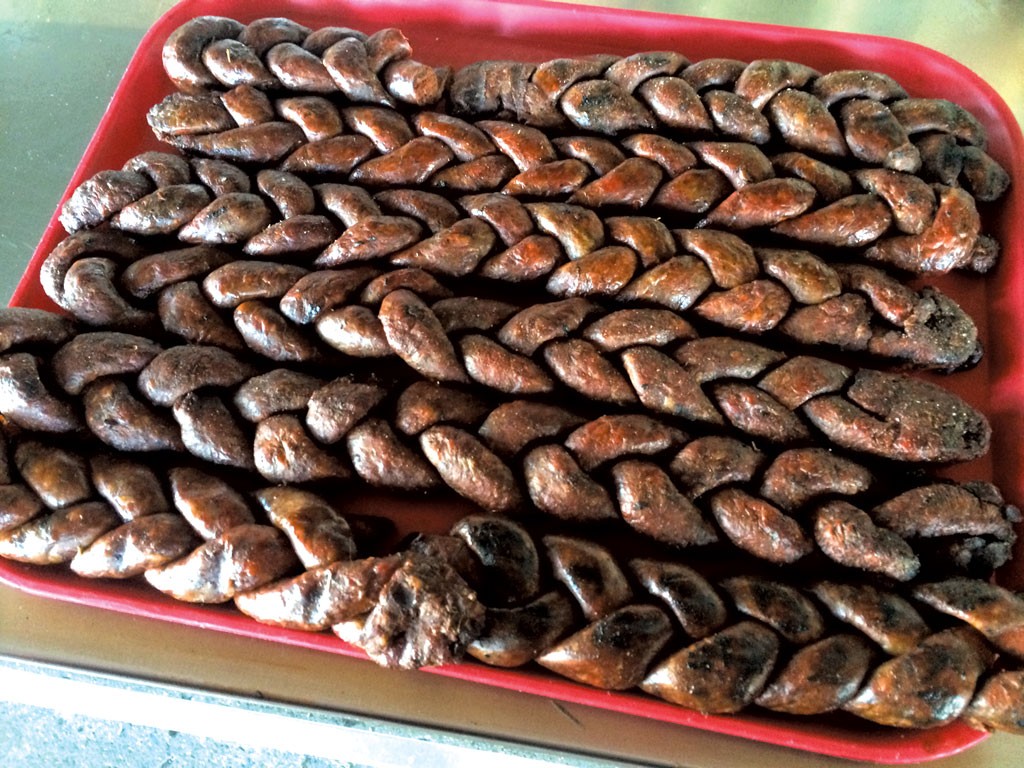 The tajines I'd seen in the smoker turned out to be filled with a whole mackerel served over ras el hanout-dusted chickpeas, eggplant and peppers. Strands of preserved lemon gave the dish a salty, tangy flavor that made it hard not to finish, though it still ended up filling my heaviest doggie bag. The braided merguez I'd seen was also part of the tajine. I preferred it to the fish, which was difficult to take apart in the darkened cabin. Spitting out pin bones at dinner is never sexy, even in low light.

My French Canadian other half was excited to see meatloaf, but even he didn't like the bacon-wrapped mush of pork liver, ham and ground meat served with Brussels sprouts. We preferred slices of pork roast served with a rich, apple-flavored sauce. Sweetbreads topped and accompanied the roast like nodular, chewy meat grapes. On the side, homemade apple mustard was sweet and spicy. The Cabane sells it in jars, and I regret not bringing some home to slather on ... everything.

Servers granted us a brief reprieve before discussing dessert. Since there were only two of us, we learned, our $55 apiece would get us only four desserts, not five. What a relief! We skipped the pear tart in favor of halves of three others, all served on a polished tree stump covered in apples and sheaves of wheat. A hot strawberry pie and a mini trottoir pastry, filled with apples and butternut squash, were both honey sweet and flaky with larded dough.

But young pastry chef Gabrielle Rivard-Hiller wowed me with her hot chocolate-blueberry tart. Paper-thin chocolate pastry surrounded a substance that was somewhere between a chocolate custard and a ganache. Either way, the dark, intense chocolate melted around the same tiny blueberries that bobbed in my cider.

That still wasn't the most impressive sweet. The meal ended with something my dining partner and I called the "Ice Palace." I imagined C.S. Lewis' White Witch living inside the creation if she moved to Québec. Jagged pieces of purple-tinged white meringue rose on all sides of a mysterious center. On top, broken meringue chunks and phallic protrusions jutted from a layer of honey whipped cream with a single fig. Once penetrated, the center revealed layers of light vanilla ice cream and plum sorbet on a thin layer of chewy almond dacquoise.

The fresh takes on sweet, all stacked together, made this the single best dish of the night and one of the smartest desserts I've ever eaten, if also one of the strangest.

My dining partner and I had resolved not to leave the cabin in pain or struggling to breathe. We failed miserably. Though I learned little about self-control at the meal, I did take away a lesson along with my leftovers: A bit of farm-to-table gluttony would suit the Green Mountains well.

The original print version of this article was headlined: "Feral Feast"