Fattie B On His New Memoir 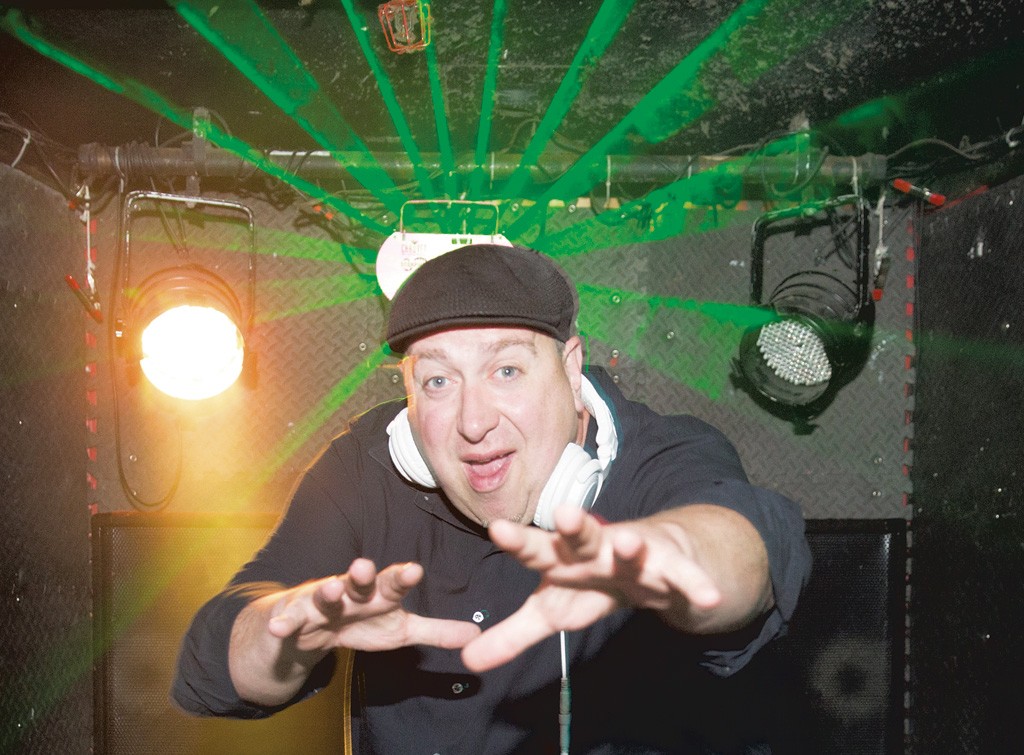 Kyle Thompson, better known to Vermonters as Fattie B, stays busy. Very busy. As an artist, rapper, DJ and, as local hip-hop's elder statesman, an enthusiastic mentor, he's a vital part of the connective tissue of Burlington's music scene. For 17 years, he's hosted Retronome, a hugely popular dance party at Club Metronome that goes down every Saturday. Under yet another name, M.K. Thompson, Fattie B recently released a biting and hilarious memoir about exactly that, cheekily titled I Was a 400-Pound '80s DJ: My Memoirs Through Music, which retraces his life from his youth in Bristol to the present day.

A lot of stories are on tap here, many of them X-rated. Although you will learn more about Thompson's testicles than you probably want to, the book remains hugely entertaining. That's because, throughout his narrative, Fattie B comes off as an overgrown, excited kid — albeit one with no filter whatsoever. Thompson is a natural storyteller and a keen observer of local culture, strengths that make it easy to forgive the gross parts. After all, those gross parts really happened.

Aside from the lurid decadence, Thompson relates tributes to his late mother, stories about growing up in a tiny town and some vital history about your favorite venues. He even confides the secret to getting a DJ to take your request immediately. (You'll have to read the book to find that out.)

Seven Days recently caught up with this perpetual-motion machine at a local watering hole to talk about the success of the book, the insanity that is Retronome and what the future holds.

SEVEN DAYS: Have you gotten feedback from other DJs on the book? I'm betting they all believe your stories without hesitation.

KYLE THOMPSON: One of the best parts of receiving feedback on the book is that fellow DJs who are reading it are so locked in to all of these stories, having shared similar experiences. But even more exciting for me is how many of the people who've read it and love it are not DJs. I wanted to try to reach the casual music lover as well, and I'm so happy that it seems I was able to do that. The response overall has been simply amazing.

SD: Your book documents a huge legacy. Have you given any thought to passing the Retronome torch, or is that momentous day still years away?

KT: I have thought about who I'd pass it off to if given the choice, but honestly I am having more fun doing it than I have in a long time. This is mainly because, as the years keep rolling on, the crowd has gotten younger and younger, and Retronome now includes four decades of music, from the 1970s to the 2000s. This allows me much more freedom throughout the nights to play newer, fresher music. I'm enjoying it a ton, and the crowds have been really responsive to the "updating." So I'd say I've still got some years ahead of me.

SD: Has there ever been a lull or an off year, or has Retronome been a thriving BTV institution pretty much the entire time?

KT: It has slow weeks here and there due to holidays and bad weather, but overall it's easily the strongest night in town. I am utterly amazed by — and eternally grateful for — its consistency and longevity.

SD: You have a great riff in the book about how Burlington's band boom subsided with the end of the '90's as venues realized it was cheaper to hire a DJ. Do you see that pendulum starting to swing back with all the young instrumental talent we've got these days?

FB: I see the venues in town that offer live music regularly, such as Nectar's, Metronome, Halflounge [Speakeasy], ArtsRiot and Radio Bean — they're all trying to strike more of a "balance" in this regard. The value of the live acts is making a comeback, if you will, due to the incredible live talents here, like Madaila, Kat Wright, Waylon Speed, the Dupont Brothers, Rough Francis and tons of others. I think these venues can still find ways to use DJs to their advantage, either by booking live acts earlier in the evenings and DJs late, or just [by] optimizing their week-night lineups.

SD: The mash-ups and remixes you spin are ridiculously good. Have you considered moving into straight-up beat/song production and making your own?

FB: I have really tried to be the DJ locally that is known for having the dope mash-ups and remixes. I am an "old-school head," so I love to find a classic song with a funky electronic or nu-disco beat to breathe new life into it. I get my mixes from multiple sources — blogs, record clubs, DJ friends from around the country. But actually, some of them are also my own. I do some of them live, and use MixMeister and Audacity for others. Most of them, though, are just discoveries from my insomnia. On late nights when my body is tired but my mind isn't, I just scour the web for the gems. I'd love to do more production, but my plate is full with other projects, my design work, my art, and now this book.

SD: Has getting a project this ambitious finished given you a bug to write more?

FB: Finishing this was really one of the most satisfying feelings I've ever experienced ... It was much more work than I — naïvely — fully comprehended going into it. I decided to use the '80s song lyrics to frame each chapter, and that helped to keep the creative juices flowing and, in the end, keep it fresh. But receiving all of the amazing responses from those who've bought and read it, it was all worth every painstaking hour.

I just finished this one, so I'm now immersed in the promoting and sales of it, but I do see a natural follow-up book beginning to formulate in my twisted mind. The perfect transition would be an all-'90s-songs-driven book with all of the amazing stories from eight years of touring with my band Belizbeha back then. And, honestly, those stories blow this book's [stories] out of the water. I just need to get permission from all of my former band members first ... wish me luck with that.

SD: Are you grateful that the format of Retronome lets you avoid EDM requests, or do you enjoy our new robot overlords?

FB: I love finding new electronic remixes of classic disco, soul and hip-hop jams from the '70s, '80s and '90s. Some of the patrons "pleasantly" let me know they'd prefer the original version, but I like updated-yet-classic sounds. As far as the EDM that lands on the Beatport Top 100, yeah, I'd rather spin a 5-year-old's Disney-themed birthday party than have to play some of that crap.

SD: You clearly don't flinch from telling very personal stories, or relating some quality debauchery. But I had to wonder: Were there stories so extreme you left them out?

FB: There are a few stories that were borderline. But those may be showing up in the next book.