Fathers in Focus: Kids VT readers share the stories behind their sweet snapshots

A picture may be worth 1,000 words, but sometimes images alone can't tell the whole story.

When we asked our Facebook friends to send us photos of the dads in their lives for our Father's Day-inspired issue, we were overwhelmed by the response. We received dozens of heartwarming snapshots of men sharing tender and silly moments with their kids. It made us want to know more about these guys. Who are they? What inspired the photo? What makes these dudes such good dads?

We asked the photo submitters to answer these questions, and their responses surprised us, made us smile and sometimes moved us to tears. We thought you'd enjoy reading some of them, too.

This was the first time Jackson slurped his pasta. Despite the busy world of Disney around us, Joe and Jackson were focused only on each other.

What makes Joe such a great papa ... Wow, I'm getting teary-eyed. A memory Joe likes to share is when Jackson was born. He says that Jackson entered the world with his eyes wide open, looking around, filled with curiosity. Since then Joe has helped Jackson explore the world around us.

Recently, they have been patiently watching a bird's nest. First, they would stand together and watch the mama bird as she sat, day after day. Then after the birds hatched, Joe would stand with Jackson and wait for the three little baby birds to poke their heads out of the nest as their mother fed them.

It's the simple moments, shared at the dinner table or on the front porch, that show how wonderful Joe is as a papa to our son.

My husband and I met in high school in New Hampshire; we've been together for almost 18 years. One of the first things I loved about him was how good he was with his little sister, who was 7 when we started dating.

Less than three years ago we were living in New York when a job opportunity popped up in the Burlington area, and he jumped on it. We both knew how much our boys would love all that this beautiful area has to offer.

I took the sunset photo on our family house-hunting trip three years ago. We were exhausted, both physically and mentally, and we had to make a decision on a house. Brian drove us to the waterfront at the most beautiful time of day and melted our troubles away.

Since then he has brought our oldest skiing at Smugglers' Notch, taken us all to the top of Jay Peak on the tram, hiked with us at the Eagle Mountain Natural Area, listened for owls on an Owl Hoot Hike, visited museums and farms, and so much more. He listens, cares and loves like no other. Nothing beats the look in our sons' eyes when Daddy is playing with them. 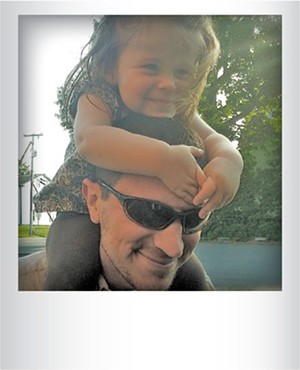 Posie loves being with Chris. They create daddy-daughter dates and visit different locations. In certain circumstances, Posie will request for her daddy to pick her up and will whisper "I'm a little shy" and then give him a big squeeze. What makes Chris a great dad that is he's not afraid to show her his truest self. He gets silly with her in crowded places, shares his passion of soccer by saving a seat for her on the coach's bench, tells her stories of his own childhood memories, and shows her how to care for and respect all beings.

Phin, our oldest, had gotten a boomerang for his birthday in March, but it was too cold to use it until just recently. Phin is autistic, so to get him to understand that we couldn't use the boomerang inside, we read to him the package that describes the "soft, outdoor fun." It was nearly impossible for Phin to wait for the weather outside to improve.

Finally, the day came to try the new toy, and within minutes "soft, outdoor fun" was stuck in a tree. Daddy came to the rescue with a nice long stick.

Daddy does more than rescue boomerangs, though. He is a tireless source of support, not only for Phin, but for me and our younger son as well. He is an equal advocate for our son's rights and he stands alongside his family with pride.

My husband, Andy, is father to three girls: Ramona, 14, Gemma, 11, and Acadia, 8. Nine years ago, as he was preparing to become a father of three, Andy rediscovered the positive physical and emotional impacts of running. In the process, he lost 90 pounds and experienced firsthand the powerful impact of setting a goal and achieving it with support.

In 2013, Andy did not hesitate to put on a pink headband and be a positive supporter when our daughter Gemma prepared to complete her first-ever 5K through Girls on the Run Vermont. This photo was captured at the finish line. To say that Gemma was a hesitant runner is an understatement, so in this photo I see a proud, supportive father and a proud, empowered little girl.

I work mainly at night, so when my wife, Alaina, went back to work during the day after both pregnancies, it only made sense for me to take care of the kids. I was nervous as hell to be taking care of two of them, both under the age of 3.

This photo helps remind me of something larger, though. I've always had a poor body image and a family history of heart disease. After Jude (our first) was born, both my wife and I decided we needed to take better care of ourselves. We began exercising and eating right. The only way I can ensure I'll be around for my kids for a long time is to keep being healthy. Recently I've been training for the Vermont City Marathon. When my wife's working, I push the kids in a double stroller as I run.

This picture was taken after a six-mile run. Looking at it makes me want to continue to run and be healthy for them.

Craig was frustrated that the tiller — yet again — wouldn't start up. While he was tinkering with it, 18-month-old Eloise grabbed a screwdriver and scooted in to "help" out. Craig is very patient with her and loves involving her in projects when it makes sense to do so. She's at an age where she is increasingly curious about the things we do and, of course, we want to do what we can to help foster that. It warms my heart to see how good he is with her. The role of "Dada" has made me appreciate so much more the patient, kind-hearted soul that he is.

This picture was taken on a break away at Glens Falls, N.Y. My husband, Preeth, is a wonderful dad. He lives for his children, and in this picture he is bonding with his little boy and taking in every second of his tininess. Preeth is kind, patient and loves playing and snuggling with his children. I feel blessed that they have such a loving father who would do anything for them. He works so hard, but on his time off, his children are his priority, always.

My husband is Chinese, and thus our son is half Chinese. My husband loves all food and shares his joy for it by cooking all kinds of ethnic food for our wonderfully blended family. We each have two children from a previous marriage — ages 9, 6, 5 and 3 — as well as this little 20-month-old guy together. Mitchell is the most amazing dad ever, on top of balancing a busy career as a physician!

My husband, Kris, and I got married the summer before his senior year of college, and discovered, a month later, that we were expecting our first child: Kristopher Sean Michael Perkins Jr. was born exactly 10 months after our wedding day.

This picture was taken on the last day of our first family vacation last summer, in Maine. We were about to leave to go back home, but decided to stop by Old Orchard Beach one more time before heading out.

We put on our new hoodies and walked the beach, talking and playing. The kids wanted to take a picture with their daddy. We took several silly pictures and this was the last one, right before they started to run off to play in the ocean. My husband decided to kiss their hands before letting them play. I love this picture because it's so clear he loves his son and daughter and is very grateful for them.

We took the kids to Maine so they could see the ocean for the first time — and because it was the last place Kris went on vacation with his dad before he died. My husband was 8 years old when he lost his father, two months after that vacation.

It was wonderful exploring the places my husband explored when he was a little boy. This trip felt like the first time we got to truly enjoy our little family.

My husband, who continues to be the sole financial supporter of our family, is now only a few credits away from getting his master's degree in special education. He has gotten straight As in graduate school, while working 40 to 65 hours a week. And he's only 26.

This fall, he will be a special educator for a local elementary school. Kris has the wonderful gift of seeing a child's potential and helping him or her achieve a better version of themselves. He's a terrific role model for our children, and we're beyond proud of him.

Ari loves the fact that her dad is strong enough to hold her up while she tries to do tricks!

My husband, Heath, is an amazing dad to our three children. He works hard all day but still finds the time to coach our son's baseball team, chauffeur our daughter from gymnastics, help with homework and take time for himself in the gym — he's been a bodybuilder for over 10 years. He is always there for our kids, to give them advice about a problem they are having, listen to a story or simply hang out. 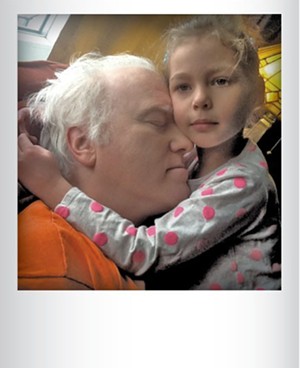 I love this photo of my family, taken on a lazy Sunday afternoon, because it shows how comfortable, loving, content and relaxed we can be together. I felt pure joy seeing them snuggled up, and I was inspired, because sometimes the quiet moments are the best.

This photo shows Tyler being an incredible dad and husband and making sure that his twin sons experienced nothing but love before they passed away shortly after their birth. Cedar and Sojourn were born unexpectedly at 20 weeks and five days gestation. They were our first babies and deeply loved. Incredibly, we conceived twin boys again and I am now 28 weeks pregnant. It is likely that these babies will get to come home with us and we are so grateful for this second chance.